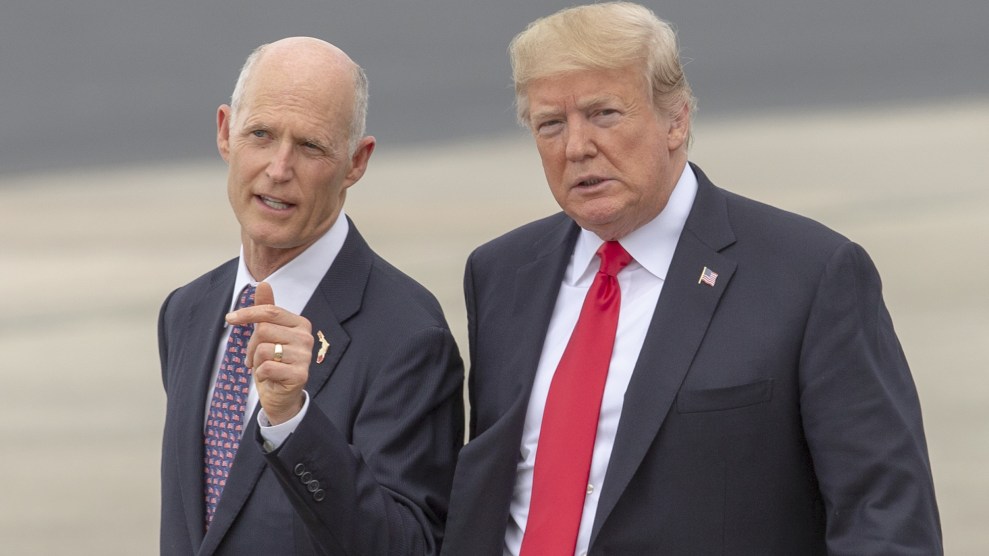 Three days after votes were cast, the results of elections in Georgia and Florida are still uncertain. But that hasn’t prevented the president from spreading unfounded allegations of voter fraud. On Friday morning, Donald Trump went on a tweetstorm accusing Democrats of manipulating the vote totals in Florida’s Broward County in their favor—without offering any proof to back up his claims. The razor-tight race has also led to accusations by Florida Gov. Rick Scott, the Republican candidate currently clinging to a narrow lead in the Senate race, that Democrats are trying to “steal the election.”

Rick Scott was up by 50,000+ votes on Election Day, now they “found” many votes and he is only up 15,000 votes. “The Broward Effect.” How come they never find Republican votes?

Scott has called for the Florida Department of Law Enforcement to investigate Broward County Supervisor of Elections Brenda Snipes and, alongside the National Republican Senatorial Committee, his campaign has filed two emergency lawsuits against election supervisors in both Broward and Palm Beach counties for not complying with state public records laws. Trump criticized incumbent Democratic Sen. Bill Nelson for hiring lawyer Marc Elias to represent him in the recount. The president claimed he was sending “much better lawyers to expose the FRAUD!”

As of Friday, Scott was up by 15,704 votes, which amounts to a 0.18 percent lead over Nelson. According to Florida law, a recount will be launched Saturday if Scott’s lead is less than 0.5 percentage points. A recount would also lead to a potential shift in the state’s gubernatorial race, which Democratic challenger Andrew Gillum only lost by 38,000 votes. Trump also called out Gillum, who conceded on election night, saying his refusal to accept the loss was “an embarrassment to our Country and to Democracy.” The president falsely stated Nelson had also conceded the election.

Mayor Gillum conceded on Election Day and now Broward County has put him “back into play.” Bill Nelson conceded Election – now he’s back in play!? This is an embarrassment to our Country and to Democracy!

In an election cycle with very real concerns over voter suppression, the president took a jab at Democrats, claiming that the missing votes should be blamed on “Russians.”

You mean they are just now finding votes in Florida and Georgia – but the Election was on Tuesday? Let’s blame the Russians and demand an immediate apology from President Putin!

The president also weighed in on the Georgia gubernatorial election, writing that Democrats need to “move on.” The results of the race are currently pending a count of nearly 25,000 provisional and absentee ballots. Democrat Stacey Abrams is hoping the remaining ballots will be enough to trigger a recount or runoff election. Georgia Secretary of State Brian Kemp, Abrams’ opponent, resigned from his position yesterday after a federal court questioned whether he should oversee the counting of ballots in his own race. Kemp has been accused of voter suppression after attempting to block the voter registrations of 53,000 predominantly minority voters.

.@BrianKempGA ran a great race in Georgia – he won. It is time to move on!