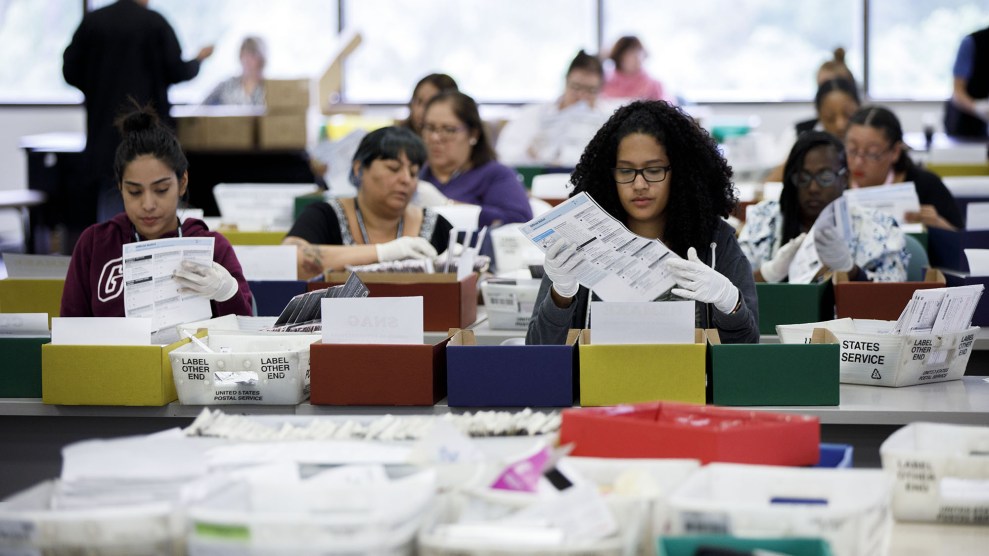 On Wednesday, more than three weeks after Election Day, Democrat TJ Cox declared victory in the race to represent California’s 21st Congressional District. It’s the only congressional race the Associated Press has yet to call, with Cox clinging to a tiny 529-vote lead. But the AP did actually call the race on Election Night—for Cox’s opponent, Republican incumbent David Valadao—before un-calling it earlier this week. It’s a pattern that played out in districts across California, where Democrats trailed by thousands of votes on Election Night but came out on top days or weeks later, leading House Speaker Paul Ryan to accuse the state of “ballot-harvesting” and “loosey goosey” practices.

In reality, it takes a long time for California to count votes because the state—unlike most others—makes sure to count every legitimate voter’s ballot.

California’s approach to election administration is to accept and count as many ballots as possible, including late-arriving absentee ballots and provisional ballots, even if it takes weeks to determine a winner. This stands in stark contrast states like Florida, which flew through a preliminary count and two recounts and then certified its results within 14 days of the election—all before Cox even pulled ahead in his race.

The fact is, every state has made a deliberate choice between election laws and policies that make it easy for voters to cast ballots—often at the expense of a speedy vote-counting process—and those that prioritize efficiency at a cost to inclusive democracy. There’s no clearer example than absentee ballot deadlines. In Florida, these ballots must be received by Election Day, forcing voters to mail them early and often putting them at the mercy of the state’s sometimes-unreliable postal facilities. (The situation was even worse in Mississippi ahead of the state’s Tuesday runoff election for US Senate, giving some voters as little as three days to get their absentee ballots notarized, mailed, and delivered.)

In California, by contrast, mail-in ballots postmarked by Election Day are counted, as long as they arrive at county election offices by the Friday following the election. Over the past few cycles, California has seen a significant increase in the number of people voting by mail. Widespread voting by mail increases turnout, but also the work that must be done when those ballots arrive on or after Election Day, as most do. By the Friday morning after Election Day this year, California counties still had around 3.7 million absentee ballots to count.

California county officials match the signatures on mail-in ballots to the ones on record to verify voters’ identity, and they give each voter no less than eight days to fix a mismatched signature. In Florida, voters with mismatched signatures can correct them up until the day before the election. After that, their votes are tossed—meaning that if their ballots arrive on or just before Election Day, they often have no recourse. (A federal judge extended that deadline by a few days during this month’s recount process, which included races for Senate and governor.)

Every state has made a deliberate choice between election policies that make it easy for voters to cast ballots and those that prioritize efficiency.

Florida does not count provisional ballots cast in the wrong precinct. Unlike California, the state does not have automatic voter registration, and voters must register 29 days before an election. Democrats have called the state’s strict rules a form of voter suppression. Sean Domnick, an attorney who worked for Democratic Sen. Bill Nelson’s campaign during the Florida recounts this month, said at the time that Republicans “want to make it hard to vote.” The problem is compounded because many voters are unfamiliar with the rules. “This election highlighted that our voters don’t understand the process,” a Florida Democratic official lamented this month as election officials tossed provisional ballots in a Democratic-leaning county because voters went to the wrong precinct or registered after the deadline.

This confusion underscores one reason for the strict election rules in Florida, Mississippi, and elsewhere: They tend to benefit Republicans. Many Democrats believe that their party might have won the close Senate and governor’s races in Florida if many Democratic ballots hadn’t been tossed for minor procedural violations. California’s experience, by contrast, demonstrates why more lenient voting laws might benefit Democrats.

Historically, Republicans, used absentee ballots more than Democrats, and they were urged by their party to send them in early. This habit has stuck. One reason that Republicans in California appeared ahead on Election Day was that these reliable Republican voters had sent in their ballots early and they were tallied on Election Day. For years, Republican campaigns, particularly John McCain’s presidential effort in 2008, urged Republican voters to send in their absentee votes early, says Lisa Bryant, a political science professor at California State University, Fresno. “So there’s a tradition of Republicans sending their ballots in early,” she says.

Republican voters skew older, while more Democrats are voting for the first time or haven’t voted often before, and these types of voters are more likely to send in their ballots late, according to Mindy Romero, who directs the California Civic Engagement Project at the University of Southern California. “Voters, generally, who tend to be more last minute—we expect them to skew a little bit younger, and more Democratic, more of color,” she says. “That has been the case for at least a few decades.” This helps explain why the last wave of absentee ballots moved several California races from red to blue. Provisional ballots, which are counted last, come disproportionately from young and poor voters, who are more likely to rent homes and therefore move change precincts more often. These groups also tend to vote more Democratic, so provisional final tallies generally add to the Democrats’ vote total.

California didn’t always make it this easy to vote—or this hard for county officials to count all the ballots promptly. In 2012, tens of thousands of mail-in ballots went uncounted because they arrived after the deadline of 8 p.m. on Election Day or their were issues with the signature. One study showed that young voters were much more likely to have their ballot rejected for arriving late. In 2014, the legislature extended the state’s absentee ballot deadline by three days. A 2016 law expanded who was allowed to pick up and drop off absentee ballots, enabling political organizers to collect absentee ballots from people’s homes and deliver them at the polls—an organizing tool that Democrats used to great effect this year to out-hustle Republicans on the ground.

This year, after a lawsuit over the signature-matching process, a new law gave voters several weeks to fix the issue. California also created conditional Election Day registration, which took effect this year and allows voters to register and cast a provisional ballot on the day of the election if they missed the regular registration deadline. On the Friday after the election, there remained more than 55,000 of these conditional ballots to count across the state. Also this year, California implemented automatic voter registration, allowing voters to register or update their registration when they visit the DMV.

The result is more people who can vote, and a longer process for counting those votes. It’s a tradeoff California has been willing to make—as have candidates like Cox who might have lost if fewer votes had been counted.