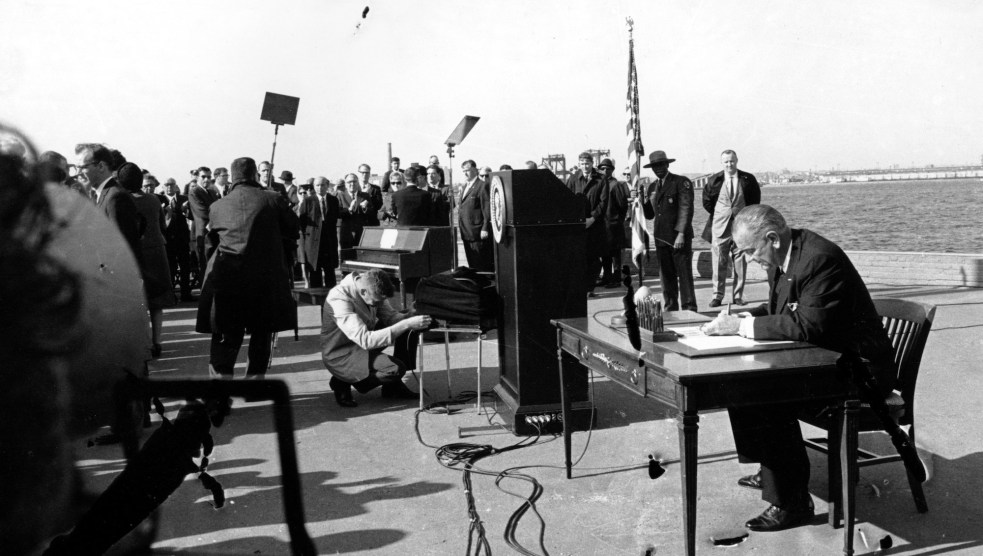 In 1979, John Tanton, a Michigan eye doctor and environmentalist, launched the modern nativist movement. He believed that population growth would slow down if poor people stayed in developing countries, where poverty and potentially starvation would keep growth in check, but that if they came to places like the United States in larger numbers, the planet would become more overcrowded. So he founded a group called the Federation for American Immigration Reform, which aimed to stop nearly all immigration to the United States. It was initially seen for it what it was: a fringe group based on long-disproven ideas about the planet’s ability to support more people.

Forty years later, FAIR would seem to be in its heyday. At least three former FAIR employees, including its former executive director, have been hired for senior roles at US Citizenship and Immigration Services, the agency responsible for legal immigration. And the White House has taken a more sharply anti-immigration stand than in any administration of the modern era.

But when it comes to swaying public opinion to its view that legal immigration should be all but eliminated, FAIR and its offshoots are farther from success than ever.

Twenty-five years ago, Democrats and Republicans felt the same way about immigrants: The Pew Research Center found that nearly two-thirds of both parties agreed they were a burden. Immigration critics were confident that those numbers would increase as a backlash to rising immigration took hold among native-born Americans. Instead, the opposite happened. By the time Donald Trump launched his presidential campaign, the share of Democrats and independents who said immigrants strengthen America had nearly doubled, while Republican opinion on the question had barely budged.

And under Trump, anti-immigrant sentiment has fallen even further as the president’s rhetoric about immigrants alienates large swaths of the public. According to a Pew poll from January, 55 percent of Republicans—8 percent fewer than in May 2015—and a record-low 13 percent of Democrats believe that immigrants burden the United States by taking jobs, housing, and health care from native-born Americans. And according to Gallup surveys, 67 percent of Americans now say immigration should be increased or kept at its present level, the highest number since Gallup began asking the question in 1965.

The United States is in the midst of a two-decade-long shift in favor of immigration, and it is only accelerating under Trump. For all the nativist movement’s efforts over the decades to rein in immigration, the chances of preserving a white majority are effectively gone.

Unlike most environmentalists of his era, Tanton believed ending the era of international migration was essential to stopping population growth and preserving the planet. Frustrated that environmentalists were treating immigration control as taboo, Tanton launched FAIR. His anti-population-growth crusade attracted few followers, but he quickly discovered that tapping into resentment of Latino immigrants held far more potential. So did Dan Stein, who became FAIR’s press secretary in 1982 and has served as its president since 2003. In 1994, as part of an oral history series FAIR was conducting, Stein told Tanton, “What produces the income is evidence of an enemy seeking to produce hostile forces and hostile consequences.”

At the time, it looked like FAIR might succeed. Opposition to immigration was rising in the early nineties amid a dramatic increase in legal immigration from Asia and Latin America, as well as high levels of unauthorized immigration from Mexico. In 1994, voters in California overwhelmingly passed Proposition 187 to bar undocumented immigrants from using government services. Frank Sharry, the founder of the pro-immigration group America’s Voice, expected huge cuts to legal immigration after Republicans regained control of Congress in 1995. A Gallup poll that year showed that only 7 percent of Americans favored more immigration and 65 percent wanted cuts, up from 42 percent in the late seventies.

When it comes to swaying public opinion, American nativists are farther from success than ever.

Stein called for slashing legal immigration from more than 700,000 green cards per year to about 100,000, hoping that Americans would realize that “we don’t need immigration as a country anymore.” When Congress rejected measures to cut legal immigration in 1996, he said the country was getting “madder and madder.”

The mid-nineties ended up being the peak of the immigration backlash. Stein didn’t seem to notice. Speaking at an event organized by Pat Buchanan, Stein said “we are about to see a tsunami” against immigration and, as conservatives tried to ban same-sex marriage, predicted that it “will be about the hottest topic in politics once we get gay marriage taken care of.” Congress did take up immigration legislation under George W. Bush. But it was a bipartisan bill that gave undocumented immigrants a path to citizenship, and FAIR fought successfully to kill it. And when the Senate finally passed an immigration bill in 2013, it was again one that paved the way to citizenship for undocumented immigrants, and FAIR lobbied fiercely to prevent it from passing in the House.

FAIR has known for decades that it needs to do more than just block legislation to succeed. Under the 1965 Immigration and Nationality Act, which removed country-specific caps on immigration designed to favor Northern Europeans and made it easier for immigrants to bring relatives to the United States, legal immigration has risen steadily, to levels not seen since the early 20th century. Tanton noted in 1989 that the post-1965 rise in immigration would “go on forever, until the situation gets so bad that finally the Congress is forced to react.” But he was wrong about how Congress—and the American public—would react.

Since 1994, the share of Republicans who tell Pew that immigrants strengthen the country has barely moved from about 30 percent; among Democrats, it has spiked from 31 percent to 80 percent. Even among white voters without a college degree—Trump’s core base of support—just one in four told Quinnipiac last year that they favored cutting legal immigration. Republicans without a college degree are now less likely to support cutting legal immigration than the average Democrat was 13 years ago.

Last year, nearly two-thirds of respondents, including 67 percent of independents, told the Public Religion Research Institute that it would be mostly a positive thing for the United States to become a majority-nonwhite country by 2045. PRRI has been asking Americans since 2013 whether they would prefer to deport undocumented immigrants or give them a path to citizenship. The responses have not changed much over the years. “It’s kind of remarkable, really,” says PRRI founder and chief executive officer Robert P. Jones. “Usually, we see some movement”—particularly when there’s a “a big bully pulpit, scaring an entire political party toward a more negative anti-immigrant stance.” And with Americans under 40 much more supportive of immigration than the overall population, the future looks bleak for FAIR.

Last year, the Republican-controlled Senate voted on a series of immigration bills. A Trump-endorsed bill to reduce legal immigration by roughly 40 percent got just 39 votes. A measure opposed by the president to fund a border wall in exchange for protections for some undocumented immigrants received 54. Neither became law, but the more progressive bill came a lot closer.

In the absence of legislative success, FAIR’s former staffers and allies in the Trump administration are turning to executive action. Trump has cut refugee admissions to record lows. USCIS, the legal immigration agency, has adopted a long list of policies that make it harder to come to the United States legally, although so far, the number of green cards issued each year is still in line with where it was under Obama. USCIS is in the process of implementing new regulations to dramatically expand a section of immigration law that blocks people from entering the country if they are likely to rely on government assistance, such as food stamps or Medicaid. The rule, which is not yet finalized, could cut legal immigration by hundreds of thousands of people per year by denying green cards to the relatives of working-class immigrants. But unlike legislation, the rule could be overturned by a future administration. Twenty-two Democratic senators—including five of the six running for president—sent a letter to the Department of Homeland Security in October, requesting that it withdraw the rule.

Asked about FAIR’s record under Trump, Sharry, of America’s Voice, responded with glee. Republicans, he noted, controlled Congress for two years and had the most nativist president in modern history. “And on his signature issues of a border wall and cuts to legal immigration, they got zilch, nada, zero,” he said. “That is an abject failure.”