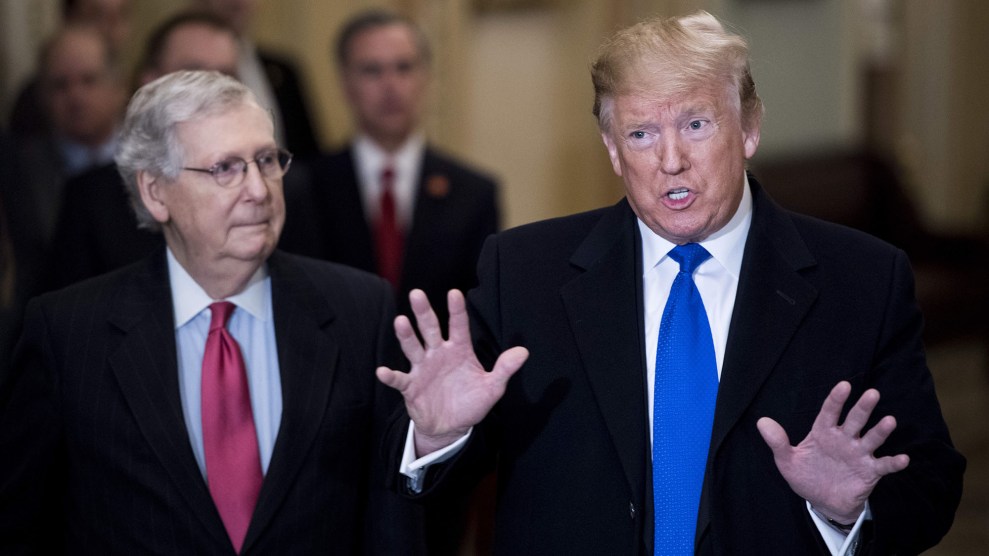 Late Monday night the Trump administration issued an eye-catching legal filing, essentially advocating for the elimination of the entire Affordable Care Act, better known as Obamacare. This was a reversal from the White House’s previous position, which only sought to invalidate certain, often popular, provisions of the law. If the administration gets its way, there would be widespread chaos as the health care system would drastically revert to its pre-ACA era existence overnight—with impacts ranging from millions of people losing Medicaid to insurers being able to refuse people because of preexisting conditions and to charge people for birth control.

The administration’s filing Monday asks a federal court to approve a ruling from earlier this year in a federal court in Texas that said Obamacare was “unconstitutional” and struck down the entirety of the health care law.

The plethora of Democrats currently running to unseat Donald Trump in 2020 eagerly pounced on the news as a major development, making it even more clear that health policy will be keyed up as a prime topic during the next presidential election, just as it was in last year’s midterms. “If it’s a fight for healthcare this administration wants, it’s a fight they’ll get—and we will win,” Sen. Kirsten Gillibrand tweeted Monday night. But while Trump’s opposition to health care reforms received plenty of attention Tuesday morning, the legal filing was not actually a major break in policy goals; Trump and his officials have spent the past two years latching onto any and every possible method to undermine Obamacare—both broadly and by slowly whittling away key provisions. What it is, though, is basically a major political gift to Democrats.

The origins of the current legal battle are a bit convoluted but date back to the tax cut bill that Republicans passed in late 2017. Squeezed in between the massive drop in corporate taxes and cuts for the 1 percent, Congress tweaked Obamacare’s individual mandate that requires everyone to purchase health insurance. Because of rules of congressional procedure, the GOP couldn’t totally wipe out that provision, so instead they just reduced the penalty for forgoing health insurance to $0.

A cohort of GOP controlled states then sued to strike down all of Obamacare, arguing that the individual mandate had been essential to the law’s functioning, and that without it the law shouldn’t stand. Last summer, back when Jeff Sessions still oversaw the Department of Justice, the Trump administration weighed in with a half endorsement of the suit; the administration didn’t think everything should be reversed, but did file a brief suggesting that the courts eradicate the core rules that prevent people with preexisting conditions from being charged higher rates or turned down from coverage, one of the most popular and essential elements of the law.

That case became a major flashpoint in the 2018 midterms, despite the fact that the staunchly conservative judge overseeing the case appeared to sit on his decision until after voters had already gone to the polls. When he finally ruled in December, the judge chose to erase the entire law, rather than ruling on narrow grounds like the Trump administration had proposed. But Trump wasn’t too heartbroken about that shift, taking to his favorite medium to gloat the night of the ruling:

As I predicted all along, Obamacare has been struck down as an UNCONSTITUTIONAL disaster! Now Congress must pass a STRONG law that provides GREAT healthcare and protects pre-existing conditions. Mitch and Nancy, get it done!

Now, Monday’s legal filing represents an evolution on the part of Trump’s DOJ, but it shouldn’t surprise anyone. Remember that Trump was willing to attach his name to any bill that the GOP-controlled House and Senate proposed in 2017, just so long as the bill did something to weaken the ACA. The president’s appointee in charge of the Centers for Medicare & Medicaid Services has led a nationwide assault on the ACA’s provision that expanded Medicaid to the working poor, with the administration allowing states to add work requirements and other restrictions that push people off the Medicaid rolls. Over 18,000 people in Arkansas lost health insurance late last year because of a work requirement, with more people in the state set to lose coverage as the program is fully rolled out this year.

But what is surprising is that the White House would think this was good politics. Health care was already teed up as a major topic for 2020, with the Democratic candidates currently engaged in a debate about whether Medicare-for-all is the best system, whether a Medicare buy-in would be better, or whether the ACA should just be improved. But thanks to Trump’s latest action, during the general election next year, it will likely be even easier for Democrats to highlight how the president wants to tear down the current system and basically threaten the country’s most vulnerable. And based on polling from the past few years, that’s a fight that the president might want to avoid. While the public wasn’t super supportive of the law while Obama was in office, since Trump took the White House and actually started trying to change the system, public polls have consistently shown that voters are in favor of it. The latest tracking number from the Kaiser Family Foundation found that 50 percent of the public supports the law, with just 39 percent opposed. And when asked about specific aspects of the law—such as allowing people to stay on their parents’ insurance until they turn 26-years-old, or protecting people with preexisting conditions—Obamacare is even more popular.