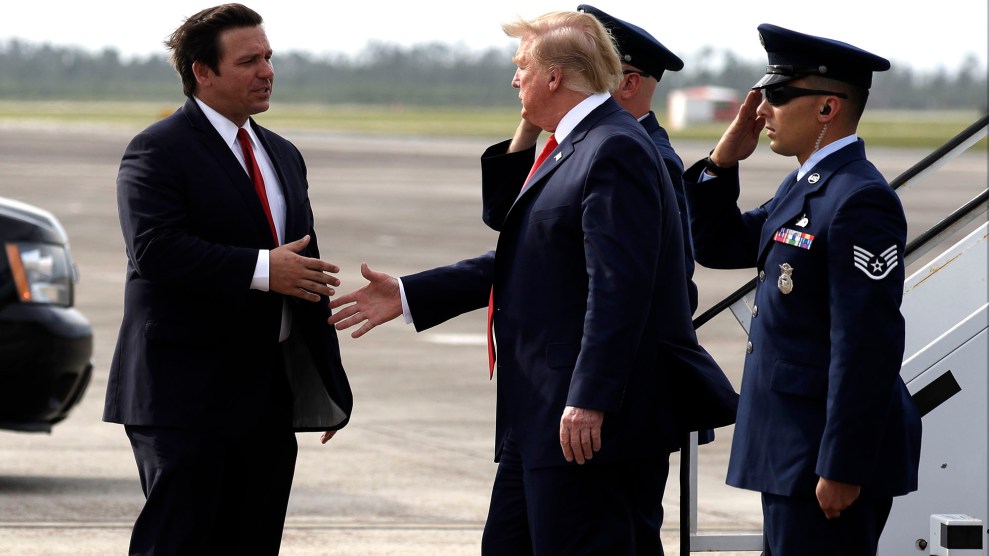 Donald Trump shakes hands with Florida Gov. Ron DeSantis as he arrives at Tyndall Air Force Base, May 8, 2019.Evan Vucci/AP

Florida Gov. Ron DeSantis signed a law on Friday denying the right to vote to anyone with a past felony conviction who owes money to the state. Critics call it a modern-day poll tax, and the ACLU immediately filed suit against the law after DeSantis signed it.

The move effectively counteracts a ballot initiative approved by 64 percent of Florida voters in November. That initiative restored voting rights to previously incarcerated individuals who had completed probation and parole, except those convicted of murder or a sexual offense. Amendment 4, as the measure was known, was set to restore voting rights to up to 1.4 million people, but the new law could disenfranchise half a million Floridians who still owe restitution and other fees, which often total tens of thousands of dollars.

For years, Florida was one of only a handful of states that barred ex-felons from voting unless their rights were restored by the governor. Now DeSantis, who won his governor’s race by 30,000 votes in November, and Florida Republicans appear to be gutting the amendment for partisan advantage.

Florida’s felon disenfranchisement law blocked one in five African-Americans from voting, helping keep the state red, since African Americans vote heavily Democratic. After Amendment 4 went into effect, voter registration numbers have more than doubled compared to four years ago, and African Americans made up 44 percent of previously incarcerated individuals who registered from January to March, even though they comprise just 13 percent of Florida voters.

It’s unclear exactly how many voters will be affected by the new law, but it’s likely in the hundreds of thousands. A 2007 study from the Florida Department of Corrections found that of the 80,000 people waiting to have their rights restored at the time, 40 percent owed restitution payments. At that rate, 540,000 of the 1.4 million ex-offenders who were supposed to have their rights restored by Amendment 4 could be disenfranchised. But that might be a conservative estimate, because from 2014 to 2018, 83 percent of fines levied by the courts had “minimal collections expectations,” according to the Clerks of Courts association. There is a provision in the law granting courts the power to waive unpaid fees or convert them to community service, but it’s unclear how that will work, and judges have already expressed concern that it will create a lengthy court bottleneck. The Florida Rights Restoration Coalition, which led the effort to pass Amendment 4, started a new fund to help people pay off their fines.

The Florida law is part of a broader effort by Republicans to restrict access to the ballot in advance of the 2020 election, with 19 bills curbing ballot access moving through legislatures in 10 states.