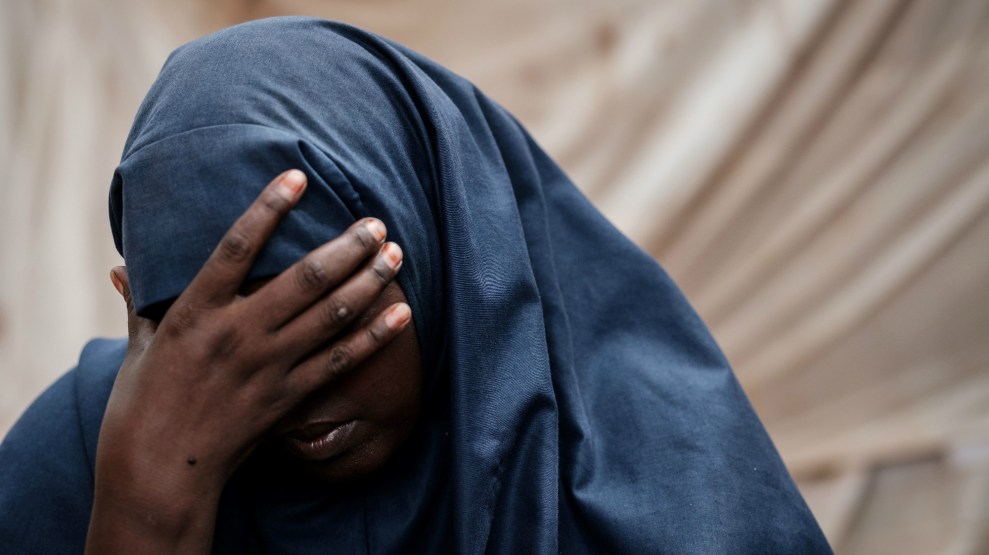 Somali refugee, who prefers to hide her name, in 2018.Yasuyoshi Chiba/AFP/Getty

During President Donald Trump’s campaign rally in Greenville, North Carolina, on Wednesday, the crowd chanted, “Send her back! Send her back!” in response to his criticism of Rep. Ilhan Omar (D-Minn.). Trump stood back and listened for more than 10 seconds before continuing, although now he insists that he rejects the racist sentiment of the crowd.

The president’s tweets and comments about Omar speak to more than racism in language; they also reflect the explicit racism of his administration’s overall refugee policy. “The share of admitted refugees who are Muslim has dropped from 48 percent at the end of the Obama administration to 11 percent in recent months,” wrote Mother Jones‘ Noah Lanard in 2018. And this policy has especially affected refugees from Somalia, among the poorest and most desperate countries in Africa. Millions of Somalis have fled a civil war, which ensued after the overthrow of the dictator, Siad Barre in 1991. Others have tried to escape the drought, food shortages, and violence resulting from political instability. As of January 2018, over 870,000 Somalis were registered as refugees in the Horn of Africa and Yemen, while an estimated 2.1 million were displaced within the country itself.

It was an appalling moment, but not a particularly surprising one. From the beginning, Trump has made it clear that he doesn’t want people like Omar in the country. On the campaign trail in 2015, he called for a “total and complete shutdown of Muslims entering the United States.” Days before the election, he flew to Omar’s home city of Minneapolis and criticized the “large numbers of Somali refugees coming into your state.” Once in office, Trump issued a travel ban barring visas for people from Somalia.

“Despite Somalia having one of the largest refugee crises in the world and despite there being a really large number of Somali refugees who still depend on the US for resettlement,” said Noah Gottschalk of the International Rescue Committee, “we’ve seen a really sharp reduction in resettlement numbers of Somalis to the US as a direct result of this administration’s policies.”

What that means, he says, is that thousands of Somali refugees, many of whom have been displaced for years and cannot return to Somalia safely, have been “left out in the cold and cut off from from this really important last resort option of being able to find safety in the US.”

On Thursday, Politico reported that Trump officials are trying to cut refugee admissions down to zero next year. According to Gottschalk, Somalia is one of the main countries of origin for refugees globally. During the Bush and Obama administrations significant numbers of Somali refugees were admitted, so the precipitous decline, Gottschalk notes, shows that “what the Trump administration is doing is really an anomaly.”

“There are still many people who really had pinned their last hopes for safety and security on resettlement to the US,” he continued, “who’ve just had the door slammed on them by this administration.”