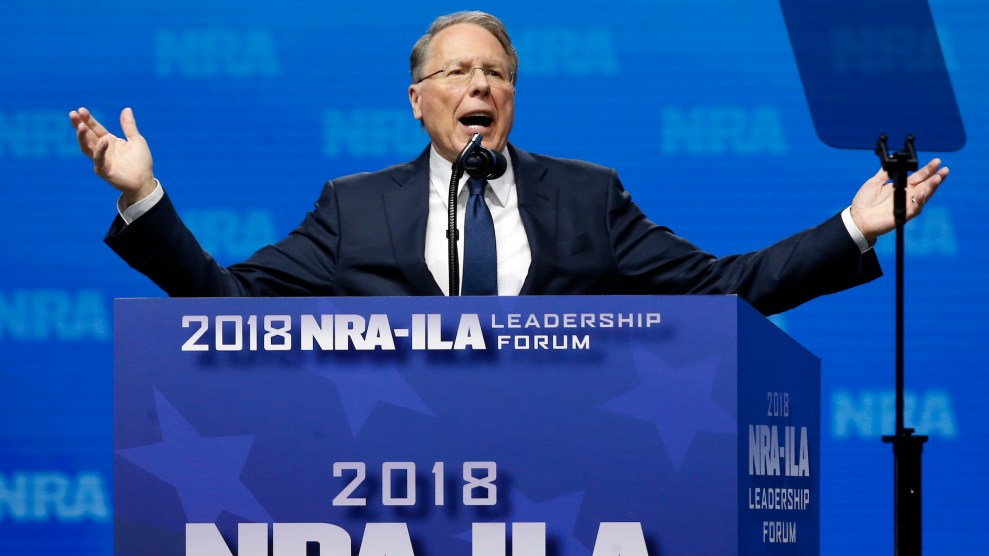 Over the past couple of years, the National Rifle Association’s leadership and finances have devolved into a slow-moving train wreck. From failed coups to a bevy of lawsuits to Russian ties to questionable spending practices, the nation’s leading gun-rights group has never been in worse shape. And now Senate Democrats are pushing for an Internal Revenue Service investigation into the organization’s tax-exempt status.

On Wednesday, Senate Minority Leader Chuck Schumer (D-N.Y.) and Oregon Sen. Ron Wyden, the top Democrat on the Finance Committee, sent a letter to the IRS outlining the findings of a Senate investigation into the NRA’s interactions with Maria Butina, a Russia pro-gun activist who last year pleaded guilty to conspiracy to act as an unregistered foreign agent. “The findings of the report,” the letter states, “further suggest that NRA officials’ use of the organization to advance personal business interests may have exposed the NRA to further involvement” by Butina and Alexander Torshin, who at the time was a high-ranking Russian official said to be close to Vladimir Putin.

The letter also cites a number of news reports regarding the NRA’s financial woes and states that the organization “may have been engaged in other significant and persistent acts of potential private inurement and other impermissible acts.” Over the past year, there has been substantial reporting about lavish expenditures by NRA chief Wayne LaPierre and the questionable flow of funds to the group’s board members. Ever since former NRA president Oliver North leaked a controversial memo at the organization’s annual meeting in April detailing the group’s dire financial situation, there have been numerous calls for an IRS investigation. But two tax experts Mother Jones previously spoke to were not too optimistic that the IRS would follow through:

“It looks like there’s something wrong and I think the IRS certainly needs to investigate this,” Matthew Journy, a DC-based lawyer who counsels nonprofits on tax matters, says on the [Washington] Post’s investigation. “The IRS’s job is to enforce situations like this and make sure that the funds that the NRA collects are being used for the purpose of benefiting its members, and not necessarily for the purpose of benefiting its board members.”

But Journy is not too optimistic that the IRS will intervene anytime soon. “Immediate is not a term that the IRS really follows very well,” he says.

Neither is Marcus Owens, another DC tax attorney who spent 25 years as a lawyer in the IRS’s Exempt Organizations Division—10 of those years as the division’s director. In that capacity, it was his job to implement federal tax rulings and enforce programs for exempt organizations, political organizations, and tax-exempt bonds. He was also the IRS’s primary liaison for Congress, state regulators, and other federal agencies for issues involving tax-exempt organizations. In other words, he was in the exact position to open up an investigation into the NRA.

“The NRA has an interesting orientation to legal compliance,” Owens says. He points to the GOP’s eight-year gutting of the IRS that has left the agency severely understaffed and crippled, especially in the exempt organizations area. “The number of IRS audits that are occurring now is probably well under a thousand a year, and most of those are very small organizations,” he adds.

But even if the IRS doesn’t investigate the NRA, the group is still facing investigations from the attorneys general in both New York and Washington, DC.