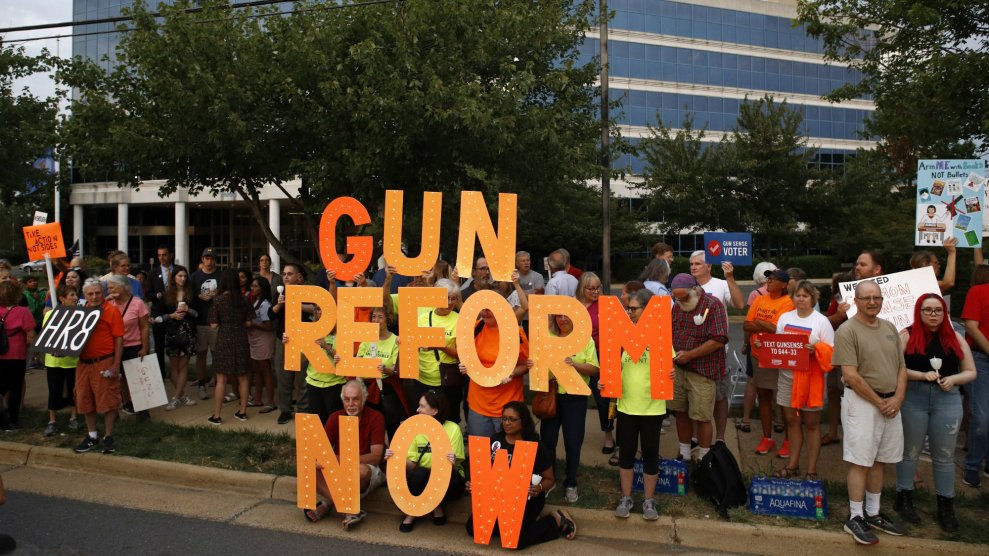 With less than a week until Virginia’s state elections, the gun control debate has emerged as the leading issue for voters—and national groups on both sides of the issue have taken notice, pouring an unprecedented amount of money into campaigns. Thus far, the National Rifle Association has spent $298,000 on campaign contributions to help ensure the state’s GOP maintains control of its state legislature, according to the nonpartisan politics data group the Virginia Public Access Project. That might not seem like a huge number—especially compared to the hundreds of thousands of dollars gun control groups like Everytown for Gun Safety and Brady Campaign to Prevent Gun Violence have spent to boost Democratic candidates—but it’s far more than the NRA has ever spent on in its home state.

A majority of the NRA’s direct financial contributions this year have gone to Todd Gilbert, the state’s Republican House majority leader, who represents a district in the Shenandoah Valley and is facing his first general election challenge in 10 years. On September 3, the NRA made a $200,000 donation to Gilbert, the largest single donation the group has ever made to a candidate since at least 1996, the first year VPAP began tracking money in Virginia’s elections. It also donated large sums of money to two long-time incumbent Republican state senators: $50,000 to Mark Obenshain and $25,000 to Ryan McDougle. Elsewhere, the NRA has contributed smaller sums to candidates in tight races, including to Bill DeSteph, the gun-dealing senator representing the district where a shooter killed 12 people in May, and Kirk Cox, the speaker of Virginia’s GOP-controlled House of Delegates who, in July, ended a special session of the state’s general assembly, which had been called specifically to pass gun control, without even holding a vote.

The NRA has long been an influential force in American politics nationally, and that was never more evident than in the 2016 presidential election, when it spent a massive $54.4 million to help elect Donald Trump. But since Trump took office, the group has devolved into chaos thanks to infighting in its leadership, political scandals, and depleted finances. As the fight over gun control has emerged as one of the top issues ahead of the 2020 presidential race, the nation’s leading gun rights groups has never been in worse shape.

For many political analysts, Virginia’s off-year state elections are often seen as an early indicator of where the country may be headed politically. “These midterms the year before a presidential election are sometimes seen as a vehicle for gauging support for the president’s party nationally,” says Stephen Farsnworth, a political science professor at Virginia’s University of Mary Washington. “Democrats and Republicans both want national bragging rights for Virginia.”

Over the years, the NRA hasn’t traditionally had to spend much in Virginia state elections. In 2017, a year in which Democrats made significant gains in the state’s legislature, the group only spent $31,580 in direct campaign contributions to support Republican candidates—but it reportedly planned to spend up to $750,000 on TV ad buys (VPAP doesn’t have the NRA’s independent expenditure filings listed for 2017) . But as the debate over gun control has evolved since the 2016 presidential election—especially in Virginia, in the wake of a mass shooting in Virginia Beach in May—the group has ratcheted up its spending like never before. It’s too soon to say if that will also be the case for 2020—so far the NRA has only spent slightly more than $250,000 in next year’s federal elections according to OpenSecrets—but its influence in Virginia’s state elections this year show that it’s at least willing to put up a fight in the battle over gun control.