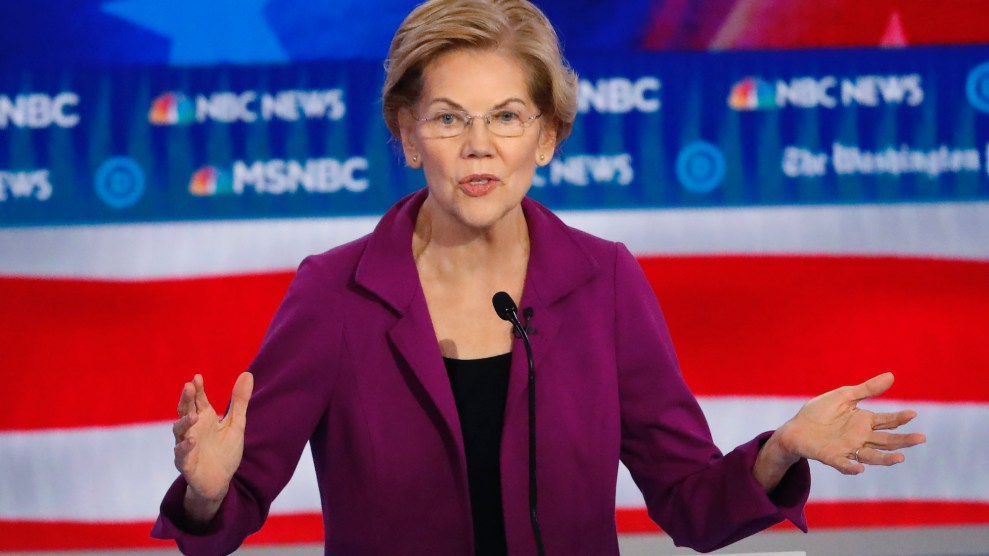 On the morning of Wednesday’s Democratic debate, Elizabeth Warren received what was surely a welcome boost: Health care activist Ady Barkan, who has devoted his life to improving American health care as he slowly dies from ALS, endorsed Warren’s candidacy for president.

It was a major endorsement. Barkan has been among the most influential and tireless champions of single-payer health care, activism informed by the exorbitant costs he and his family suffer as a result of his disease. He advised Rep. Pramila Jayapal (D-Wash.) and fellow 2020 hopeful Bernie Sanders on their respective House and Senate Medicare for All bills and delivered an emotional testimony on the subject at the House’s first-ever Medicare for All hearing earlier this year.

Barkan lauded what Warren proposed to immediately do in her first 100 days in office, which she repeated from the debate stage: Improve existing Medicare to include coverage for dental, hearing, mental health, and long-term care; immediately lower the eligibility age for Medicare to 50, granting 57 million people access to government-sponsored care; and establish a plan that would automatically enroll Americans under 18 and everyone making less money than 200 percent of the federal poverty level. “I have spent much of my time advocating for Medicare for All,” Barkan explained in his endorsement. “Warren shares that goal. And über-wonk that she is, Warren has recently articulated in detail how to pay for and transition to a single-payer health care system.”

Barkan’s vote of confidence for Warren gave the Massachusetts senator some desperately needed cover. Warren’s position on health care had been amorphous heading into the fall; during a summer debate, she raised her hand and said she was “with Bernie” on Medicare for All, but failed to outline the contours of what her plan would look like—a noticeable gap for a candidate who famously has a plan for everything. When her transition to Medicare for All finally manifested earlier this month, Sanders purists slammed her for the mechanism of that provision: After those immediate extensions in the first 100 days, she’d rely on Congress to pass legislation to officially implement a government-backed single payer plan, something that she wouldn’t expect to happen until her third year in the White House. “In the third year, when people have had a chance to feel it and taste it and live with it, we’re going to vote and we’re going to want Medicare for all,” Warren said with confidence from the debate stage.

But the attacks from the left were not Warren’s concern on Wednesday night. Sanders, when given the opportunity, chose not to criticize Warren and instead pivoted to her typical talking points about the dysfunction of private insurance, noting that “the current health care system is not only cruel, it is dysfunctional.”

Instead, the challenges came from former Vice President Joe Biden, who’s spent much of the fall hammering Warren for bringing an “elitist” attitude to her health care plan. “It’s representative of an elitism that working- and middle-class people do not share: ‘We know best; you know nothing.’ ‘If you were only as smart as I am, you would agree with me,'” Biden wrote in a Medium post on November 5.

On the debate stage, Biden went at her again. “You have to give up private insurance,” Biden said. He explained that his universal health care proposal would allow people to “buy into a Medicare-like proposal,” taking a jab at Sanders and Warren by explaining, “I trust the American people to make good judgements about what’s in their interests.” To top it all off, “The vast majority of Democrats do not support Medicare for All,” the former vice president said.

Biden didn’t have his facts straight on that point. The Kaiser Family Foundation’s most recent polling found that a majority Democrats and half of independent voters favor Medicare for All. Back in January, another Kaiser poll found that over 80 percent of Democrats were in favor of both a public option similar to Biden’s proposal as well as a single-payer government-sponsored insurance system.

That piling on hasn’t only come from the debate stage. Last week, President Barack Obama, addressing a crowd of some of the Democratic party’s wealthiest donors, voiced concern that continued emphasis on Medicare for All could alienate moderate voters worried about losing their private health insurance—regardless of what type of plan might follow in its stead.

Warren may have been the subject of leftist attacks, but when onstage with her fellow Democratic frontrunners, she had the chance to show how much closer she is to Sanders than to the alternatives other candidates are putting forth.