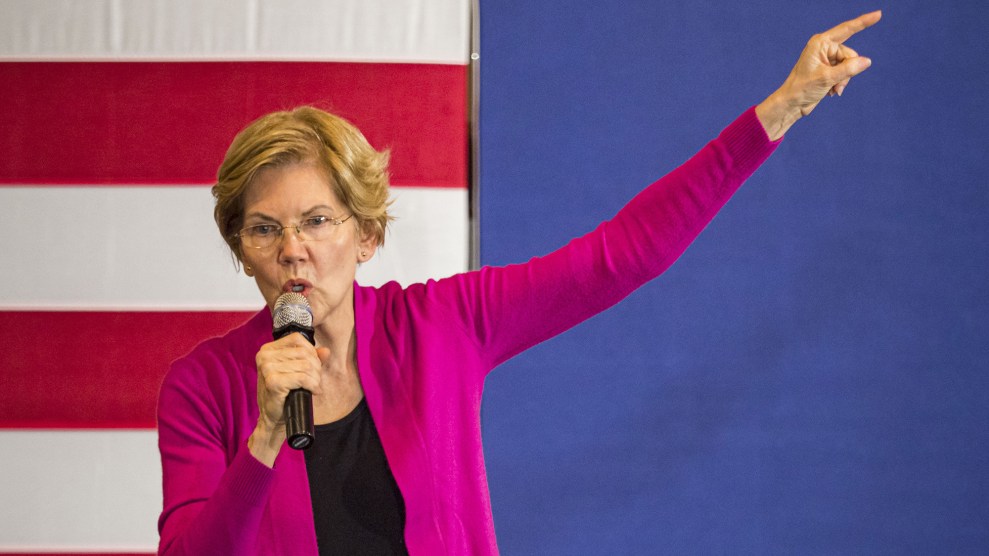 On Tuesday, Elizabeth Warren released a plan for combatting white nationalist-inspired violence with a simple basic premise: Make the government take the problem seriously—maybe for the first time.

In April of 2009, the Department of Homeland Security issued an internal report warning of a rise in right-wing extremism. The analyst who authored it, Daryl Jones, deduced that the election of the first black president and the financial crisis had created fertile ground for extremism. When the document leaked, it prompted a backlash from conservatives. The Obama administration caved, rescinding the report. As Jones wrote in a Washington Post op-ed recounting the incident after 2017’s deadly white supremacist rally in Charlottesville: “Work related to violent right-wing extremism was halted. Law enforcement training also stopped. My unit was disbanded. And, one-by-one, my team of analysts left for other employment. By 2010, there were no intelligence analysts at DHS working domestic terrorism threats.”

Warren’s plan seems designed to prevent any such future drawdowns, envisioning a federal bureaucracy that makes stopping white nationalist violence a priority by studying the problem, tracking it, and prosecuting it. It also calls for early prevention measures, gun control, and building trust and police reform in targeted communities to improve relationships with law enforcement.

While domestic terrorists are regularly prosecuted, white nationalist violence has not been a top priority of the Justice Department. In October, DHS acting secretary Kevin McAleenan issued a memo directing law enforcement to take the threat of racially-based violence seriously after hate-inspired attacks from Christchurch, New Zealand to El Paso, Texas left nearly 100 people dead—a policy that contrasted with the Trump administration’s dismissiveness of the problem.

Warren is not the first 2020 Democratic contender to issue such a plan. Julián Castro also has a detailed plan to curb white nationalist violence by prioritizing a federal response to the problem, as did Beto O’Rourke before he exited the race. All three included gun control in the their plans.

Heidi Beirich, who tracks hate groups at the Southern Poverty Law Center, said she appreciated how Warren’s plan takes white nationalist terrorism seriously—in contrast to a current focus solely on international terrorism. She also said the plan reflected some priorities of her organization, including increased research, community outreach, reforming police departments, and addressing white nationalism in the military. Perpetrators are often former service members, she says, and it’s important that the armed forces do not operate as a training ground for extremists. She also applauded a plank that called for disrupting international networks sustaining white nationalist violence. “For far too long, we have thought about white nationalist groups as though they just live within the borders of the 50 states, and they don’t,” she said.

The role of the internet as a tool of radicalization, recruitment, and source of how-to manuals is a growing part of the problem. But Warren’s plan is relatively light on how she would address online hate. Indeed, the government may have less latitude to crack down on online hate than private companies. While Facebook, for instance, talks about honoring free speech when it allows hateful content on its platform, it’s government—not private companies—that is actually confined by the First Amendment. “I’ll establish a commission to work out ways to combat violent extremist content on the Internet in a manner consistent with freedom of expression,” the plan states.

“We have the laws. What we lack is the will to prioritize investigating and prosecuting.”

Perhaps the most controversial part of Warren’s plan is her contention that existing federal law is sufficient to lock up would-be domestic terrorists. Warren’s plan calls for federal prosecutors to take over cases from their local counterparts. “There are at least 50 offenses related to domestic terrorism already on the books,” the plan says. “There are also other statutes that can be sued to prosecute white nationalist extremists, including hate crimes and organized crime laws. We have the laws. What we lack is the will to prioritize investigating and prosecuting.”

But federal prosecutors have faced recent setbacks pursuing domestic terrorists. “Roughly half of the potential domestic terrorist attacks ‘disrupted’ by the FBI end in arrests on state or local charges—and the charges that are brought federally often don’t match the magnitude of the alleged crime,” HuffPost reporters Ryan Reilly and Christopher Mathias wrote in a June, citing multiple recent cases against domestic terrorists that government prosecutors lost. Earlier this year, federal prosecutors arrested a white nationalist Coast Guard lieutenant, charging him with stockpiling weapons as part of a plot to create a “white homeland” and “murder innocent civilians on a scale rarely seen in this country.”

The case checks multiple boxes—from rooting out white nationalism in the military to gun control—suggesting a Warren justice department would wage a determined prosecution.

In the Coast Guard officer’s case, the gravity of the criminal’s alleged offenses and ambitions were not met with equally serious charges. Federal prosecutors ultimately only brought gun and drug charges.