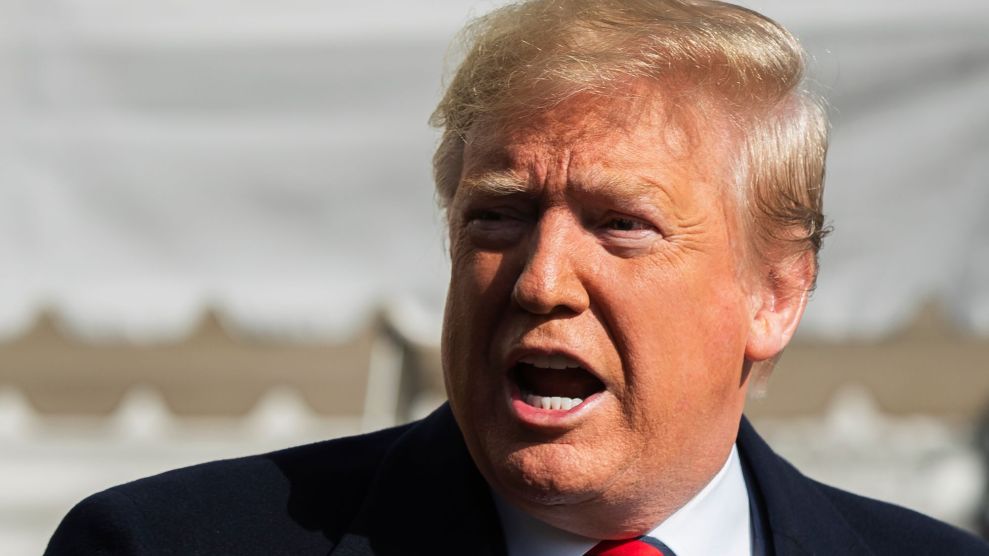 President Donald Trump likely lied to special counsel Robert Mueller about conversations he had in 2016 regarding WikiLeaks’ plans to release information stolen from Democrats by Russian hackers. That’s the big takeaway from dramatic courtroom testimony that occurred Tuesday in the trial of Roger Stone.

The revelations came from Rick Gates, a former Trump campaign aide who took the stand as federal prosecutors wrapped up their case against Stone, the longtime Trump adviser who was charged with lying to Congress about his efforts to interact with WikiLeaks in 2016. In court, Gates described a July 31, 2016, phone call he witnessed while in the car with Trump headed to LaGuardia Airport—nine days after WikiLeaks had dumped tens of thousands of hacked emails from the Democratic National Committee. Gates said he could not hear what Stone was saying, but saw Stone’s number on Trump’s caller ID and recognized Stone’s voice. After the call, Trump “indicated that more information would be coming” out, Gates testified.

Gates’ testimony contradicts Stone’s claim to the House Intelligence Committee that he did not communicate with anyone on the Trump campaign about information he claimed to have gathered regarding WikiLeaks’ plans to release hacked Democratic information. But more significantly, it calls into question Trump’s assertions to Mueller’s team. In written responses to the prosecutors last year, Trump stated, “I do not recall discussing WikiLeaks with [Stone], nor do I recall being aware of Mr. Stone having discussed WikiLeaks with individuals associated with my campaign.” Trump also told Mueller: “I do not recall being told during the campaign that Roger Stone or anyone associated with my campaign had discussions with any of the entities named in the question [including WikiLeaks] regarding the content or timing of release of hacked emails.”

Gates’ testimony suggests Trump was in direct communication with Stone about WikiLeaks. Gates’ statements to the court also indicate that Trump received updates on what Stone was telling other campaign officials about WikiLeaks. His testimony depicts Trump and his campaign as trying to use Stone as something of a go-between with WikiLeaks to obtain inside information they presumably could exploit. (Throughout the campaign, Trump and his aides repeatedly denied Russia was attacking the election, but Mueller’s final report did note the campaign attempted to take advantage of this attack.)

Gates revealed on Tuesday that Stone began telling Trump campaign officials early in the campaign that WikiLeaks was preparing to release material damaging to Hillary Clinton. Gates said Stone told him in April that information would be coming out via WikiLeaks. That was long before the Democratic National Committee announced on June 14 that it had been hacked by Russia.

Gates testified that after the DNC announcement, Stone contacted him, saying the matter was urgent. Stone reported to Gates that “more information would be coming out of the DNC hack,” according to Gates, and Stone asked Gates to give him contact information for Jared Kushner, Trump’s son-in-law, and another campaign aide so he could brief them on the hack. (This was several days after Kushner, Donald Trump Jr., and Paul Manafort, then the campaign chair, had met with a Russian emissary whom they were told was bringing them dirt on Clinton as part of a Kremlin scheme to assist the Trump campaign. They later claimed the meeting had not yielded any ammo they could use against Clinton.)

Throughout June and into July, Stone continued to tell top Trump aides that WikiLeaks would be releasing material harmful for Clinton. Gates said that he and Manafort were skeptical. But on July 22, 2016, WikiLeaks put out the hacked DNC emails, disrupting the party’s convention and prompting the resignation of the DNC chair Debbie Wasserman-Schultz.

Gates said the Trump campaign was thrilled with these developments. Gates said that Stone was quick to inform the campaign that he had been right and that Stone continued to predict that more releases were coming from WikiLeaks. Gates testified that Manafort asked him to follow up with Stone to find out when that new information would appear. “Manafort indicated that he was going to be updating additional people on the campaign, including the candidate,” Gates said, referring to Trump. If Manafort did talk to Trump about imminent WikiLeaks releases, that would be further indication that Trump misled Mueller.

In his written responses to Mueller, Trump claimed, somewhat implausibly, that he did not recall any such conversations with Stone, Manafort, or anyone else—rather than denying that such discussions had occurred. That could protect him from perjury charges after he leaves office. (It’s tough for prosecutors to prove that someone did, in fact, remember an event.) But Gates’ testimony is strong evidence that the president lied to Mueller to cover up a possible Trump campaign connection to WikiLeaks and to hide interactions that Trump might have feared could be seen as something akin to collusion.