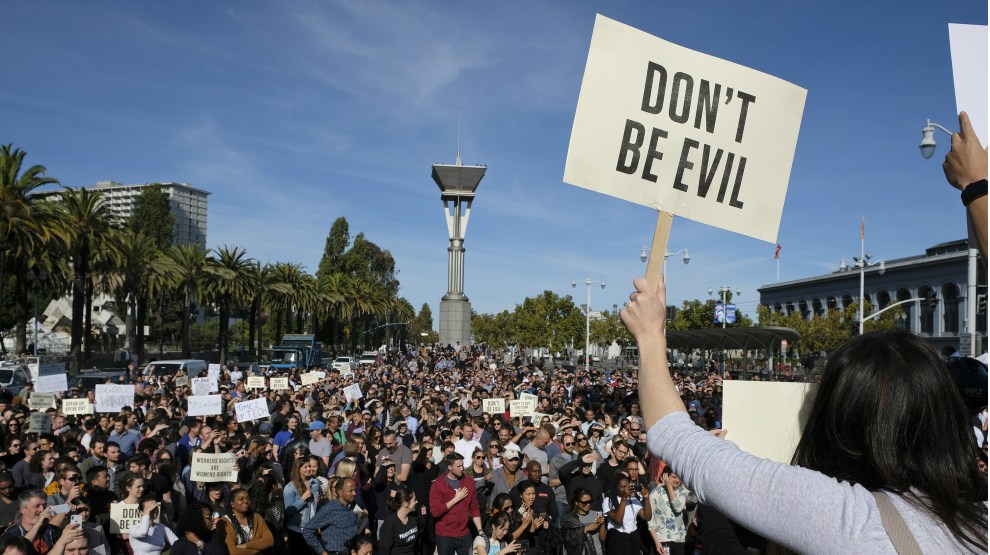 Four former Google engineers have accused the company of firing them “for engaging in protected labor organizing” and say they’re planning to file an Unfair Labor Practice charge with the National Labor Relations Board. Writing on the Medium page of Google Walkout for Real Change—which organized thousands last year to protest sexual misconduct at Google, among other concerns—the former employees describe their firings as part of the company’s ongoing union-busting effort:

It’s clear that their draconian, pernicious, and unlawful conduct isn’t about us. It’s about trying to stop all workplace organizing. Google wants to send a message to everyone: if you dare to engage in protected labor organizing, you will be punished.

Days before Google dumped the engineers—Laurence Berland, Paul Duke, Rebecca Rivers, and Sophie Waldman—it emerged that the company had hired the anti-union firm IRI Consulting. In a statement to NBC News, Google said it had fired the employees for “clear and repeated violations of our data security policies.” Bloomberg News reported last week that these violations included accessing the online calendars of other employees.

To this point, Google employees have organized but stopped short of forming unions. The New York Times reported recently that Googlers have created “solidarity unions”—worker-led groups that lack NLRB certification and don’t bargain on behalf of employees. The union effort might be informal right now, but the union-busting is anything but.

Update, December 9, 2019: On Monday, the National Labor Relations Board confirmed it will look into Google’s firing of four employees who say they were dismissed for organizing. “We have begun an investigation,” said a spokesperson. The case will be investigated over three months. The complaint is below. Here’s the relevant bit:

Google unlawfully promulgated and enforced new data classification policies, data protection guidelines, “community guidelines” and codes of conduct; initiated investigations against the four above named employee leaders based upon retroactive application of such guidelines; interrogated them; and discharged them on November 25, 2019 within minutes of each other. Google engaged in all of this unlawful conduct in order to discourage and chill employees from engaging in protected concerted and union activities in violation of the National Labor Relations Act.

Google’s above-referenced unlawful conduct flies in the face of its own aforementioned words in its Code of Conduct and stifles workers’ ability to freely raise issues, to disagree with leadership, to organize, and to address aspects of Google’s workplace interactions, product development, ‘corporate citizenship,’ and business practices. Its action are the antithesis of the freedoms and transparency it publicly touts.