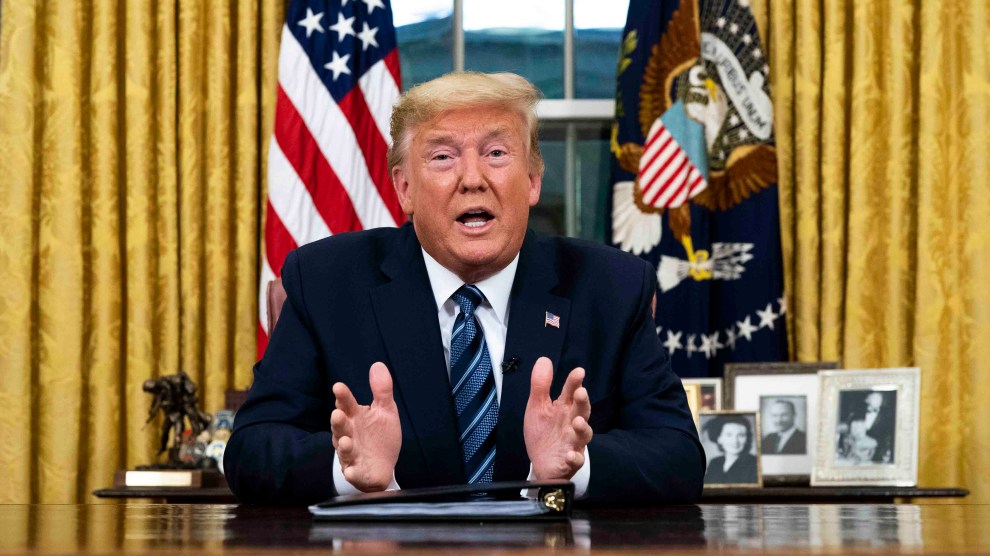 Donald Trump’s utterly incompetent response to the coronavirus has become readily apparent in recent days. But this disaster is not a solo enterprise. His catastrophic performance as president during the early stages of the crisis is the culmination of decades of right-wing action aimed at subverting the one entity that can protect Americans from the deadly threat at hand: government.

For many years, Republicans and conservatives have demonized government. In his first inaugural address, Ronald Reagan, the superstar of the right, proclaimed, “Government is not the solution to our problem. Government is the problem.” The well-known conservative strategist and lobbyist Grover Norquist once said, “My goal is to cut government in half in twenty-five years, to get it down to the size where we can drown it in the bathtub.” The tea party arose in opposition to federal assistance for those Americans slammed by the housing collapse of 2007 and became a movement encompassing anti-government fervor and intense paranoia. And Trump rode this wave into the White House.

Trump could only be acceptable to voters who had long been told that government was the problem.

On the campaign trail, Trump embraced the right-wing caricature of the federal government as a collection of ineffectual fools who did little more than collect taxes, impose regulations, and hinder American greatness. Trade, health care, the economy—all of this, Trump said, were challenges he could easily take on while delivering spectacular results. Know-how and experience were not needed. Not with a brain like his. Governing was simple.

Trump could only be acceptable to voters who had long been told that government was the problem. He was the antithesis of government experience and expertise. And he made that a selling point and convinced 63 million people to vote for him, as if they were picking a winner on a reality television show. After all, he was amusing and a kick in the ass of the libs who thought credentials and seriousness actually mattered.

Now the joke isn’t too funny. And tens of thousands, perhaps hundreds of thousands of Americans will die because the GOP’s war on government paved the way for Trump’s incompetence.

Trump entered the White House not taking the job seriously. He fretted over the estimates of the inauguration crowd size, while, out of neglect or with intent, he depopulated the federal government. Key positions across various agencies have gone unfilled throughout his tenure. He hollowed out the State Department. The Department of Homeland Security has had top slots empty for long stretches. As has been noted much in recent days, Trump’s downsizing of the National Security Council included dumping the office of global health. And when he did appoint people, there frequently was little consideration of experience. His acting director of national intelligence has no previous background in intelligence. And if you haven’t seen the recent stories about college seniors snagging important posts in the Trump administration, google away.

For Trump, governing didn’t really matter. He had no interest in it. When Republican legislators met with him to discuss a health care bill, he told them he didn’t care about the details: “Forget about the little shit.” His only priority was how he would fare politically. After talking to Trump on a cellphone last year, then-Ambassador Gordon Sondland told a colleague that Trump didn’t care about Ukraine’s conflict with Russia. His sole concern was the “big stuff”—whether the Ukrainian government would knuckle under his pressure to launch unfounded political investigations that benefit Trump.

Trump took credit for an economic recovery that was long in motion before he moved into the White House. He claimed responsibility for plant openings that had been planned prior to his election. He bombed other nations without bothering to formulate strategic policies. And he ripped up international agreements that had been the result of tremendous work and effort—the Iran nuclear agreement and the Paris climate accord—claiming he could come up with better deals. And then he didn’t even try to come up with better deals. But, to be fair, Trump did start a pointless trade war and went hog-wild in handing out tax cuts to the well-to-do, dramatically increasing the deficit.

Government was just another show for Trump. If a celebrity was interested in an issue, perhaps then it counted. If he could build something that would carry his brand, that counted, too. And, of course, if he could demagogue a controversy, that would hold his interest. But managing an entire branch of government and ensuring it served the public? He’d rather be bragging about ending environmental regulations or be on the golf course. With his nonstop tweeting and constant retreating to Trump properties, he gave the impression the presidency was barely a full-time position.

After decades of Republican attempts to delegitimize government, he came along and downgraded the job of president. Mostly, Trump has been a post-government president.

That is obviously not what the nation needs now, as the coronavirus spreads and threatens the health of Americans and the well-being of the country. Trump has so far failed to effectively address the crisis because he doesn’t know how to be president. As a narcissist, he cannot perceive priorities beyond his own personal needs. But perhaps more important, because he doesn’t care about government, he does not understand how government works, and consequently he is not able to marshal the office of the president and the executive branch he leads to effectively serve the citizenry in this time of danger.

After decades of Republican attempts to delegitimize government, Trump came along and downgraded the job of president. Mostly, he has been a post-government president.

As he demonstrated with his Oval Office address on Wednesday night, Trump cannot focus on the critical issues (testing, public health measures) and he cannot be truthful. (The United States is not, as he said, the “most prepared” nation when it comes to dealing with the coronavirus.) His statements over the past few weeks have misinformed the public and likely caused some Americans to take actions that increased the risks they faced. His reluctance to recognize a serious problem on his watch caused the US government to get off to a slow start regarding testing and other measures that could constrain the virus’s transmission. The public impact will be worse because of his missteps. Trump’s inaction and actions will likely lead to the deaths of thousands of Americans who might otherwise have survived this plague.

That is quite a judgment to hang on one man. But Trump deserves it. And the Republican establishment and conservative movement share the blame. They devoted decades to spreading the anti-government virus. They fought against attempts to create a national health infrastructure that would be better prepared for such a calamity, ceaselessly railing against a “government takeover” of health care. And ever since Trump gained the White House, they have accepted and even championed his brand of know-nothingism and turned a blind eye to his dishonesty, incompetence, bigotry, and troubling behavior. They acted as if it did not matter that the man in the White House was not capable of doing the job.

The GOPers and the conservatives who have embraced Trump have enabled and protected a president who will bear responsibility for the death of many of our neighbors, friends, and loved ones, and for an economic nightmare. All this has long been in the making—an outcome of the right-wing project to undermine and vilify government. The country did not reach this point by accident. The right got the diminished government it wanted, led by the diminished president it celebrates and supports. And that is now killing us.