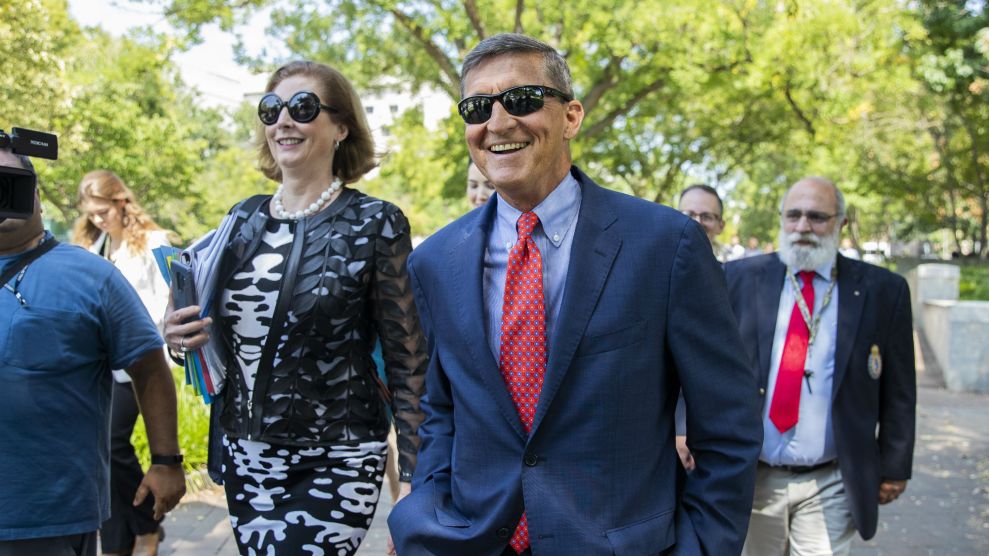 President Donald Trump may be poised to try to distract from his botched response to coronavirus by pardoning former National Security Adviser Michael Flynn. Or maybe Trump hopes to use the pandemic as cover to pardon Flynn. It’s hard to be sure.

But what is clear is that Trump is threatening to let Flynn off the hook for lying to FBI agents about Russia. And the president seems to have based this threat on a claim concocted by Flynn’s lawyer, right wing pundit Sidney Powell, and dismissed months ago by the federal judge overseeing the case.

This development continues a pattern. Since hiring Powell last June, Flynn has used legal filings to amplify far right conspiracy theorists who claim his guilty plea resulted from a deep state plot. Flynn is now attempting to undo his November 2017 guilty plea. This effort has largely failed in court, but by pushing attacks on former special counsel Robert Mueller’s investigation, Flynn’s defense seems to be succeeding with Trump.

On Sunday, the president tweeted that he might pardon Flynn based on a claim the FBI “has ‘lost’ the records of General Michael Flynn.” Trump didn’t explain where this was reported.

So now it is reported that, after destroying his life & the life of his wonderful family (and many others also), the FBI, working in conjunction with the Justice Department, has “lost” the records of General Michael Flynn. How convenient. I am strongly considering a Full Pardon!

But a review of Powell’s busy Twitter feed suggests that she believes Trump is referring to her assertion that federal prosecutors failed to turn over to Flynn’s defense team “the original 302” of Flynn’s January 24, 2017 interview with FBI agents. (302s are interview summaries prepared by FBI agents.)

See Twitter thread by the great #patriot @AKA_RealDirty for clips from my talk with @Hillsdale
on how to fix Justice. Begin to restore trust in #FBI #DOJ by exposing truth & dismissing @GenFlynn case in the interest of justice! @realDonaldTrump@KerriKupecDOJ @BernardKerik pic.twitter.com/MJYwcoVuQq

In his guilty plea, Flynn admitted he had lied to agents in that interview by claiming he did not discuss US sanctions on Russia with that country’s ambassador during the presidential transition period.

If the FBI lost records from this interview, it would be a big deal. But neither the FBI nor the Justice Department says this happened. Instead, they say they turned over more than sufficient evidence to Flynn, including the original notes of agents who interviewed Flynn as well as the 302 report summarizing the interview. (You can read a redacted version they filed in court here.)

Powell claims there is a missing “original 302” of the January 24 interview. She has implied the FBI may have destroyed this document and altered evidence to hide evidence of Flynn’s innocence. (Powell here is pushing a version of a popular theory among right wing pundits that a failure by FBI agent Peter Strozk and other FBI officials to immediately find that Flynn was lying in the January 24 interview suggests he was telling the truth. An alternative understanding is that Strozk’s initial impression showed Flynn had lied convincingly.)

Prosecutors, in an October 2019 filing, do indicate that it is possible that they no longer have an “earlier draft of the interview report,” but they argue that doesn’t matter. “[E]ven if an earlier draft of the interview report once existed,” the filing reads, “there is no reason to believe it would materially differ from the interviewing agents’ handwritten notes or the other drafts—all of which state that the defendant made the specific false statements to which the defendant admitted guilt.”

This argument prevailed in court. In a blistering December 16 ruling, US District Court Judge Emmet Sullivan, who is known for pushing federal prosecutors turn over any arguably exculpatory evidence to defendants, excoriated Powell’s arguments. Sullivan even accused Powell of plagiarism.

Sullivan found that “there were no material changes in the interview reports, and that those reports track the interviewing FBI agents’ notes.” He said the material prosecutors turned over is “both consistent and clear that Mr. Flynn made false statements to the FBI.” In other words, the judge found that the Justice Department not only turned over adequate records of the interview to Flynn’s lawyers, but those records show that Flynn is guilty of the crime to which he pleaded guilty.

That was in December. It’s unclear where or why Trump picked up the idea the FBI had lost “the records” in Flynn’s case. But one reason may be that Powell is still pushing the claim. She is now working to withdraw Flynn’s earlier guilty plea, and cited the “still missing original FBI FD-302” in a January motion to argue that “everything about this prosecution has violated long-standing standards and policy for the FBI and the DOJ.”

Powell, who has previously called claims that she is angling to get Flynn a presidential pardon “total bullshit,” on Monday celebrated Trump’s tweet in an email to Fox News. “General Flynn is honored by the President’s concern and awareness of this egregious injustice against him, his family, and the American people,” Powell wrote.

Flynn and Powell’s efforts have fared poorly in federal court. But they appear to winning in the White House.