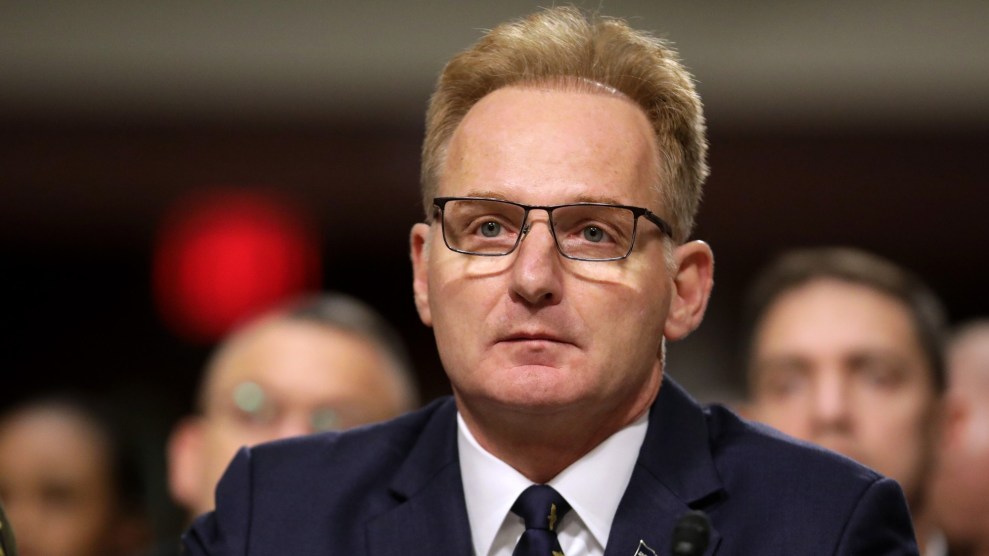 Thomas Modly, acting secretary of the Navy, resigned Tuesday after harshly criticizing an aircraft carrier captain who he had fired the previous week.Chip Somodevilla/Getty

Thomas Modly, the acting secretary of the Navy, resigned on Tuesday, one day after he called the former captain of an aircraft carrier “stupid” for drawing attention to the coronavirus crisis on his ship. The remarks, which included a profanity-laden defense of Modly’s decision to fire the captain, Brett Crozier, were widely criticized and led him to apologize hours later.

The ensuing crisis put a spotlight on Modly’s leadership at a time when the Navy is facing one of its most severe peacetime threats in its history.

On Tuesday morning, Modly met with Secretary of Defense Mark Esper and submitted his resignation. Esper later confirmed the resignation in a letter and announced that James McPherson, the undersecretary of the Army, will replace Modly. The Navy will now have another temporary civilian leader, its fourth in less than a year.

Modly’s downfall began last week when Brett Crozier, captain of the USS Roosevelt, wrote a letter describing in unsparing detail the spread of the virus among his crew members. “We are not at war,” he wrote. “Sailors do not need to die.” The San Francisco Chronicle published a leaked copy of the letter and Modly relieved Crozier of his command, saying he “undermined the chain of command” by sending the letter to a wide range of people, which increased the chances of it leaking. By the time Crozier sent his letter, more than 100 crew members had been infected with COVID-19. Crozier himself later tested positive for the disease.

In the days following Crozier’s ouster, Modly struggled to defend his decision to fire the popular leader given his otherwise sterling track record and support among the crew. At an April 2 press conference, Modly said Crozier “was absolutely correct” in raising concerns about the Navy’s response, but erred in broadly sending a letter without consulting his immediate superior first.

But in making a decision so quickly without completing an investigation into the leak, Modly revealed there were other concerns on his mind, particularly the views of President Trump. In November, Trump clashed with Navy leaders over his support of disgraced Navy SEAL Eddie Gallagher, a dispute that ultimately led to former Navy Secretary Richard Spencer’s departure and Modly’s elevation. When asked about Crozier’s letter over the weekend, Trump said, “I thought it was terrible what he did, to write a letter. This isn’t a class on literature. This is a captain of a massive ship that’s nuclear-powered.” Trump and Modly have insisted that the White House played no direct role in Crozier’s firing, but it was obvious where the president stood.

In an interview with the Washington Post‘s David Ignatius on Sunday, Modly admitted that Trump had been on his mind when he fired Crozier. “If I were president, and I saw a commanding officer of a ship exercising such poor judgment, I would be asking why the leadership of the Navy wasn’t taking action itself,” he said.

On April 5, Modly provided his own example of poor judgment. He traveled to Guam, where the Roosevelt is currently stationed, and gave a profanity-laden speech to the crew where he said Crozier was either “too naive or too stupid” to hold a command if he believed his letter would not be leaked. The audio of Modly’s own speech later leaked and top Democrats, including Speaker of the House Nancy Pelosi, called on him to step down. His fate was sealed the next day.