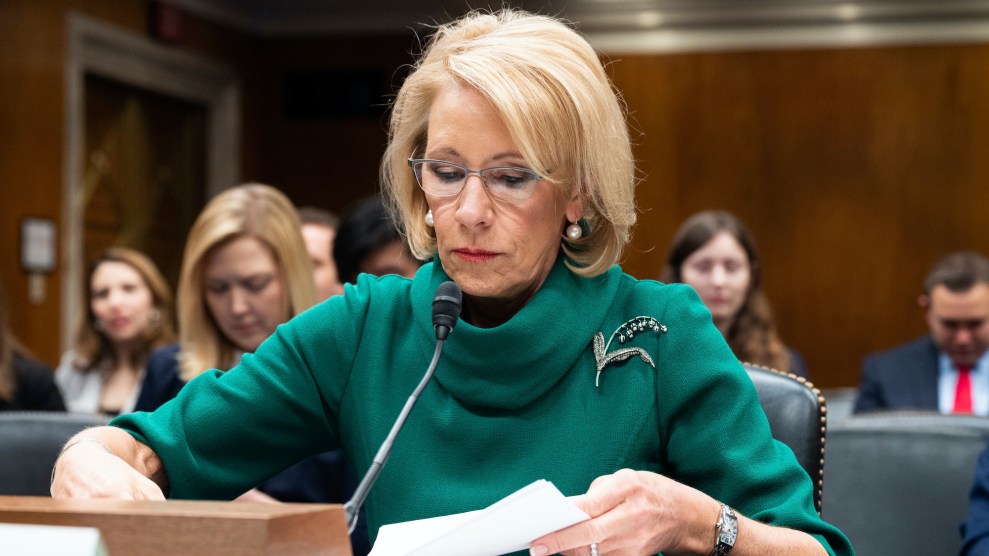 On Wednesday, Education Secretary Betsy DeVos issued long-anticipated new rules for how schools must must address sexual assault and harassment under Title IX, the federal law that prohibits sex discrimination in education. The regulation, which will affect all public and private schools that receive federal funding, will go into effect in mid-August—just as schools and colleges are preparing for students to possibly return to classrooms.

The sweeping new rules will require a broad overhaul of disciplinary proceedings across US colleges and K-12 schools. They allow schools to make it harder to prove allegations of sexual violence, even as they require institutions to adopt courtroom-like procedures for handling complaints. Advocates for survivors warn that the new rules may reduce the number of incidents schools can be held legally responsible for investigating, in part by by narrowing the definition of sexual harassment.

“We can continue to combat sexual misconduct without abandoning our core values of fairness, presumption of innocence, and due process,” DeVos said on Wednesday. The revised rules, she said, take “historic steps to strengthen Title IX protections for all students, and to ensure all students can pursue an education free from sex discrimination.”

Under previous federal Title IX guidance, sexual harassment was defined as “unwelcome conduct of a sexual nature.” The new rules set a stricter standard, defining it as “unwelcome conduct that a reasonable person would determine is so severe, pervasive and objectively offensive that it denies a person access to the school’s education program or activity.”

The new rules also bolster procedural protections for accused students and faculty. Colleges and universities, but not K-12 schools, will be required hold live, private hearings with one or more “decisionmakers” to adjudicate sexual misconduct. Both students making allegations and those being accused of misconduct may be in the same room or in separate rooms with videoconferencing if one requests it. Both parties will have the right to an advisor, such as an attorney, who can cross-examine the other party, yet only ask questions the decisionmaker deems “relevant.” The rules prohibit complainants or respondents from personally cross examining each other. (Some advocates had feared the final rules would allow accused assailants to question complainants face-to-face, potentially retraumatizing survivors and deterring reporting.) K-12 schools may also use a hearing to resolve complaints and put questions to each party, but they are not required to do so under the new rules.

All schools will be permitted to apply the “clear and convincing” standard of proof to determine whether a student is responsible for sexual misconduct. This is a higher standard than the “preponderance of the evidence” standard required by Obama-era guidance. (The “preponderance of the evidence” standard requires evaluating whether the misconduct was “more likely than not” to have occurred—the same standard of proof used by the Supreme Court in evaluating civil rights discrimination cases.) And both parties must be allowed to appeal the outcome.

On Wednesday, advocates for survivors decried the more legalistic procedures the rules require. “Among its many radical and unjust provisions, the rule requires schools to single out sexual harassment and assault reports for unique skepticism and separate, onerous procedures, making it harder for survivors to come forward and access the support they need,” said Alexandra Brodsky, a civil rights attorney at Public Justice. “We certainly agree that schools should have fair processes in place that meet the needs of complainants and respondents,” said Emily Martin, vice president for education and workplace justice at the National Women’s Law Center. “The core concern that we have is that the set of rules promulgated here treat complaints of sexual harassment and sexual assault as somehow uniquely untrustworthy—as somehow uniquely requiring the quasi-criminal procedures that are not required for any other sort of school investigation of student or faculty misconduct.”

Shortly after the new rules were released, NWLC and Know Your IX, a campus sexual assault advocacy group, vowed to sue the Education Department. “We promise to fight tooth and nail to ensure this rule never goes into effect,” said Sage Carson, Know Your IX’s executive director. By narrowing the definition of sexual harassment and requiring schools to dismiss complaints about off-campus assaults that do not occur as part of a school “education program or activity,” survivor advocates warn the new rules may reduce the number of incidents schools can be held legally responsible for investigating.

“The Title IX rule released today will make schools more dangerous for everyone,” Martin said. “The Trump administration and Betsy DeVos with this rule are sending a clear message to schools that they need to do less to address sexual harassment and assault and more to discourage student survivors from ever making a report in the first place.”

The announcement signaled the end of the nearly three-year regulatory process in which more than 120,000 people, many of them survivors, submitted comments about the proposed rules. In March, more than 200 advocacy groups and schools sent a letter to the Education Department asking it to delay the final regulations until after the COVID-19 pandemic. Within hours of DeVos’ announcement on Wednesday, President Donald Trump’s reelection campaign seized on the announcement to criticize former Vice President Joe Biden, who led the Obama administration’s response to gender-based violence and campus sexual assault, and is currently facing an allegation of sexual assault from a former staffer. (Biden denies her claims.)

The new regulations, which carry the force of law, are a major development in nearly a decade of changing federal guidance for schools on how to handle sexual assault and harassment. In 2011, the Obama administration’s Education Department published what’s become known as the “Dear Colleague” letter, clarifying that schools should determine whether a student had committed sexual misconduct based on the preponderance of the evidence. In an effort led by Biden, the Education Department urged schools to take quicker action when receiving complaints, discouraged them from allowing students to cross-examine one another in hearings, and banned the use of mediation to resolve sexual assault cases. Schools that violated the guidelines risked being found in violation of Title IX, damaging their reputation and, theoretically, having their federal funding pulled.

In response, schools struggled to update their policies amid rising awareness of the prevalence of sexual violence on campuses and among younger students, high-profile controversies, and an expanding list of institutions under federal investigation for violating Title IX. But the movement for campus survivors’ rights was met with backlash from accused students, defense lawyers, and a handful of journalists and professors, as well as men’s rights groups that argued that the Obama administration had overreached and that college disciplinary proceedings lacked due process in sexual misconduct cases. Hundreds of accused students and faculty have filed lawsuits, with some claiming they were unfairly punished because they were men. Some judges have agreed that campus disciplinary processes are unfair to the accused and have mandated cross-examination and live hearings.

When DeVos announced in September 2017 that she was rescinding the Dear Colleague letter and replacing it with a new set of regulations, she presented the move as a way of rebalancing the rights of survivors and the accused. “The system established by the prior administration has failed too many students,” she said in prepared remarks. “The notion that a school must diminish due process rights to better serve the ‘victim’ creates more victims.” The quotation marks around the word “victim” were hers.