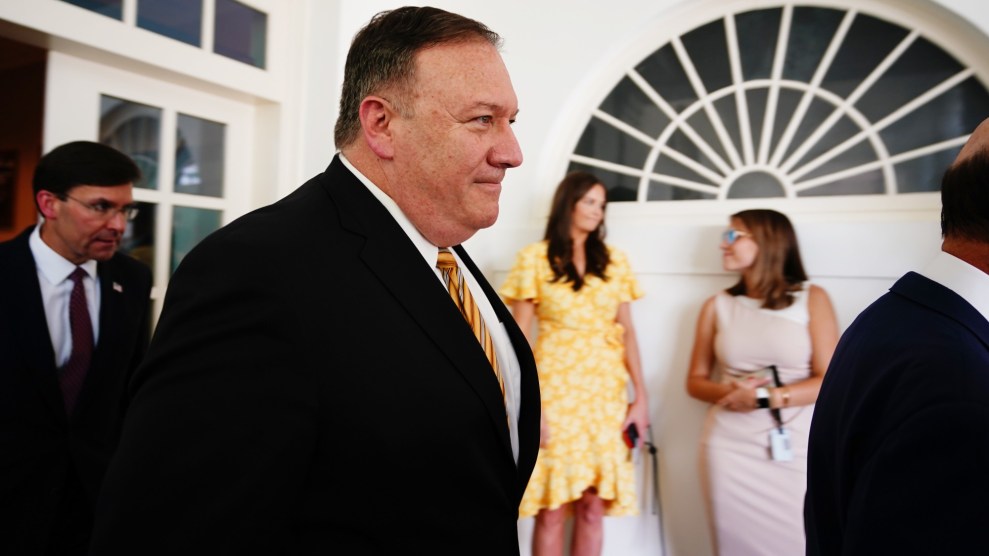 Last July, Secretary of State Mike Pompeo launched an advisory panel to help the US practice “a moral foreign policy … grounded in [a] conception of human rights.” Crucially, its mission, Pompeo explained, would include reining in a dangerous proliferation of “new” human rights. “Unalienable rights are by nature universal. Not everything good, or everything granted by a government, can be a universal right,” he wrote in a Wall Street Journal op-ed explaining the formation of this Commission on Unalienable Rights. “Loose talk of ‘rights’ unmoors us from the principles of liberal democracy.”

It didn’t take long for human rights experts to read between the lines. Pompeo, whose leadership of the State Department has become in many ways an experiment in how quickly he can orient American foreign policy toward his evangelical Christian faith, stocked the commission with academics and diplomats best known for defending religious freedom while opposing reproductive rights and LGBTQ equality.

Pompeo, whose leadership has become in many ways an experiment in how quickly he can orient American foreign policy toward his evangelical Christian faith, stocked the commission with academics and diplomats best known for defending religious freedom.

On Thursday, the commission finally unveiled a draft of its long-anticipated report, finding—surprise, surprise—just what Pompeo suggested in his initial op-ed: not all rights are created equal. Describing a human rights landscape “in crisis,” the report focuses mainly on the Declaration of Independence and Universal Declaration of Human Rights and mostly ignores the binding treaties establishing a framework for international human rights law. The problem, as the commissioners see it, is that a proliferation of new rights include many in competition with one another, which has eroded the international consensus around human rights. The solution, then, is to boost protections of certain rights, particularly religious freedom, while diminishing others.

“As anticipated, the report elevates religious freedom as an unalienable right, while dismissing abortion and same-sex marriages as not rights but instead ‘divisive social and political controversies,'” Jayne Huckerby, director of the International Human Rights Clinic at Duke Law School, tells me. She notes that the report “recognizes that legally there should be no hierarchy between different types of rights,” but “still calls for US foreign policy to de-emphasize economic and social rights compared with civil and political ones.”

In practice, that has already started to happen. With Pompeo leading from Foggy Bottom, the United States has renounced its role as a leader in promoting LGBTQ equality and reproductive rights abroad, most prominently in Trump’s expansion of the so-called global gag rule, which restricts which nongovernmental organizations can receive US aid based on whether they perform any abortion-related activities. US diplomats have teamed up with countries with abominable records on these issues—Saudi Arabia and Brazil among them—to oppose international agreements aimed at preserving those rights. When Trump appeared at the United Nations General Assembly last year, he chose to host an event focused on religious freedom. And, while his administration regularly attempts to cut back on international aid, the president still recently signed an executive order giving $50 million to support international religious freedom.

“This administration practices consistent and continued erasure of LGBTQ people and refuses to acknowledge that access to reproductive health care is essential for survival,” says Molly Bangs, director of reproductive rights advocacy group Equity Forward. “LGBTQ people face threats to their health, safety, and civil rights here at home and around the globe and this report makes zero mention of protecting their rights.”

Since the commission’s formation, Pompeo has been a public cheerleader of its work, taking care to note that the group is not crafting policy, but simply elaborating “the principles through which we can ground America’s commitment to championing human rights in our enduring dedication to unalienable rights and our tradition of constitutional self-government,” as he wrote in the Washington Post this week. For the past several days, he’s been tweeting in anticipation of the release of its draft report, pairing quotes from Elizabeth Cady Stanton, Frederick Douglass, and Martin Luther King Jr. with the hashtag “UnalienableRights.” Still, his support for the panel has often been nakedly political and, of course, does not exactly honor the legacy of the very individuals he’s held up as symbols of these unalienable rights. Pompeo traveled to Philadelphia on Thursday, ignoring concerns about the safety of himself, his team, and others during the coronavirus pandemic, to give a speech at the National Constitutional Center. In his remarks, he took time to criticize “rioters” for “desecrating monuments to those who fought for unalienable rights” and suggested that the New York Times‘ 1619 Project, which examines the legacy of slavery in the United States, was “a disturbed reading of history” and “a slander on our great people.”

Pompeo took time to criticize “rioters” for “desecrating monuments to those who fought for unalienable rights” and suggested that the New York Times‘ 1619 Project, which examines the legacy of slavery in the United States, was “a slander on our great people.”

Rob Berschinski, a former State Department official who is now senior vice president for policy at Human Rights First, said Pompeo’s remarks “loosely clothed a foray into the culture wars under the seal of the US State Department. It should rightfully be seen as a political speech unbecoming of a Secretary of State.”

The speech, though, is just the culmination of a year’s worth of work that, while abstract in its consideration of the historical and philosophical roots of human rights, is intensely political. Across its five public meetings, which Huckerby and her colleagues at Duke Law analyzed in an article for Just Security, “religious freedom was clearly intended to be a core focus of the commission” and was “frequently discussed” by the commissioners, including in the context of when it clashes with the right to have an abortion.

There’s also the simple matter of who Pompeo chose to serve as commissioners, including chair Mary Ann Glendon, a former US ambassador to the Vatican who once said awarding the Pulitzer Prize to the Boston Globe for its coverage of sexual abuse by Catholic priests “would be like giving the Nobel Peace Prize to Osama bin Laden.” (Pompeo, in his remarks on Thursday, noted that he once worked as Glendon’s research assistant, calling the experience “one of my life’s greatest gifts.”) The commissioners’ selection is also one reason several human rights advocacy organizations, including Robert F. Kennedy Human Rights, sued Pompeo in March, alleging that the Commission on Unalienable Rights violates federal law requiring advisory bodies be independent and “fairly balanced among competing points of view.”

“There is reason to believe the Secretary carefully selected the Commission members to yield a pre-determined result: constraining the understanding of ‘unalienable’ human rights to the narrow set of rights allegedly grounded in theories of natural law,” the lawsuit states.

This, though, was of course the point. Just look at the reaction among Pompeo’s core group of supporters, the evangelical right, to see what was expected of this panel when it was announced last year. Back then, Tony Perkins, president of the right-wing Family Research Council, praised the newly-formed panel for “ensuring that the protection of these fundamental rights—the most foundational of which is freedom of religion or belief—is a core element of strategic policy discussions.”