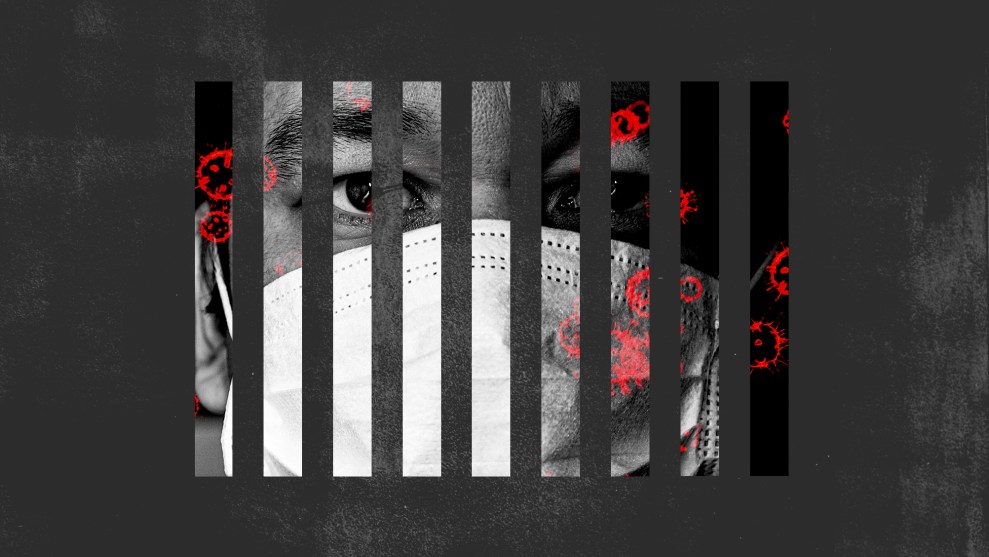 In May, Officer Smith was at the airport in Alexandria, Louisiana, with a group of immigration detainees on the verge of being deported. But there was a problem. Smith—who asked to be identified by a pseudonym out of fear of retaliation for speaking out—said that the detainees’ temperatures reached as high as 103 degrees. If detainees had temperatures above 99 degrees, they couldn’t be deported under Immigration and Customs Enforcement policy. So Smith was instructed to blast the air conditioner to “freeze them out” so they could pass temperature checks and and get on the plane.

Smith is a whistleblower at the Richwood Correctional Center, a COVID-ravaged immigration detention center in northern Louisiana, speaking out with legal representation from the Government Accountability Project, a watchdog organization that protects corporate and government whistleblowers. Last week, I spoke to Smith and a second Richwood whistleblower after GAP submitted a letter to Congress that details what they’ve witnessed at Richwood.

Their accounts provide an inside look at how LaSalle Corrections, the private prison company that runs Richwood, flouted guidelines from the Centers for Disease Control and Prevention and contributed to an outbreak that caused at least 65 COVID-19 cases among Immigration and Customs Enforcement detainees at Richwood. According to the whistleblowers, LaSalle deliberately withheld personal protective equipment and vital information from both staff and detainees in hopes of preventing panic. With two Richwood guards dead after testing positive for COVID-19, the deception appears to have proved fatal.

“We want to acknowledge and highlight the tremendous work that staff are doing each and every day to protect the health and safety of the men and women in our care,” LaSalle executive Scott Sutterfield said in an email. He added, “Very disappointing that anonymous sources would attempt to distort these hero’s [sic] efforts through false and misleading allegations.” ICE spokesperson Bryan Cox said via email that “anonymous, unsubstantiated allegations should be treated with the appropriate skepticism they deserve.”

The second Richwood whistleblower, who is being identified by the pseudonym Officer Jones, said management downplayed the threat posed by COVID-19 from the start. In March, a medical official at the jail told employees that COVID-19 was comparable to the flu and that they had no right to demand extra protection if they hadn’t gotten a flu shot, according to GAP’s letter to Congress.

According to the whistleblowers, LaSalle deliberately withheld personal protective equipment and vital information from both staff and detainees in hopes of preventing panic.

Jones was particularly worried by the fact that LaSalle prohibited staff from wearing masks. Management justified the ban by saying it would help prevent “hysteria” among detainees, Jones said. But detainees had access to TV news and knew the virus was spreading. “Are we safe?” they asked Jones all the time. Staff were allowed to wear masks only after the Associated Press asked about the mask ban—by which point the virus had already entered the facility. Even then, Jones said, employees weren’t required to wear masks, and detainees didn’t get them immediately.

As I reported in April, detainees were horrified as they watched the virus spread through the facility. Guards became infected, and Richwood found itself short on staff. As a result, managers required employees who got tested for COVID-19 to keep working while they waited for results, Jones said. In one case, Jones said, someone spent two days working at Richwood with pending results before testing positive. Guards who hadn’t tested positive had to work 12-hour shifts, seven days a week, according to both whistleblowers. (LaSalle’s executive director, Rodney Cooper, told Congress last week that the pandemic has not affected his company’s ability to staff detention centers.)

People detained at Richwood like Raúl Luna, a Mexican asylum seeker I profiled, ended up with severe cases that required days or weeks of hospitalization. Smith said that five detainees were taken to the hospital on April 22 alone. Four Richwood detainees eventually spent time in an intensive care unit, Smith said, and some of them were hospitalized for weeks without contact with their families.

Smith recalled being instructed not to allow a hospitalized detainee to use a phone. Smith said LaSalle management was particularly worried that a recording of a video call featuring a COVID patient in ICE custody would get shared with the media. Smith remembered the looks on some detainees’ faces as they begged to use phones to call their families.

“If anyone was to say or do anything, they knew that they were automatically putting their job in jeopardy.”

In April, Officer Smith needed to find a colleague to help transport an immigration detainee from Richwood. But Smith had been told by a superior not to inform anyone that the detainee had tested positive for COVID-19. So Smith used coded language to convey the danger to colleagues. They got the message and refused the assignment. Eventually, a supervisor recruited a colleague to help take the infected detainee to another LaSalle facility. When they arrived, the man was so sick he could barely sit up. Smith said there were no protocols in place for how to transport someone with COVID-19.

When it came to deportations, Smith said there was intense pressure to ensure that detainees passed the pre-deportation temperature checks, and Richwood’s warden disciplined Smith when they didn’t. Smith explained that aborted deportations cost money and led to additional paperwork. Jones said “asymptomatic” was often written in the medical records of deportable detainees who had low-grade fevers but no other COVID-19 symptoms. “That was the key term,” Jones said. “It was a loophole to get these guys out of the country.”

ICE eventually began performing rapid COVID-19 tests at Alexandria, but that posed other problems. In one case, Smith said, a detainee whom Richwood had deemed COVID-negative failed one of the tests, and Smith asked what to do with him. Smith was told to return the detainee to a dorm for people without COVID-19 because the warden believed the airport test result was a “false positive.”

Those who stood up to management faced retaliation. “If anyone was to say or do anything, they knew that they were automatically putting their job in jeopardy,” Smith said. Jones explained that colleagues didn’t want to speak out because Richwood was often their family’s only source of income. (I spoke to both Richwood whistleblowers in an interview joined by GAP attorney Samantha Feinstein, who stressed that their disclosures to Congress are protected by federal whistleblowing laws that cover government contractors like LaSalle.)

In late April, Richwood guards Carl Lenard, 62, and Stanton Johnson, 51, died after testing positive. Their families believed they’d been infected at the jail. Lenard’s daughter told a local news station she wanted an investigation into how private prisons responded to the pandemic. In testimony submitted to Congress last week, LaSalle’s CEO made no mention of the deaths, saying instead that his “company’s consistent preparation, prevention, and management measures have served as a foundation to reduce the risk of transmission and severity of illness from COVID-19.”