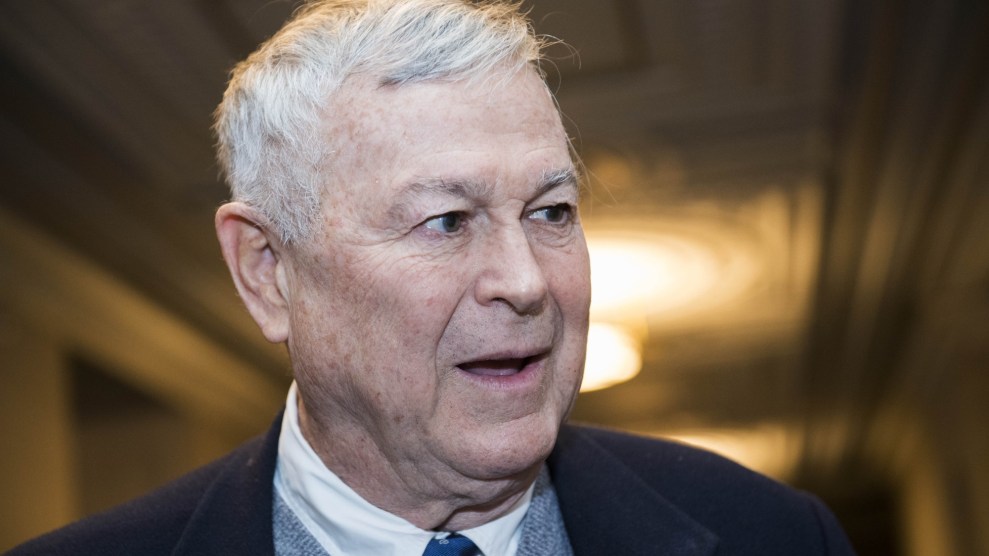 The findings on Rohrabacher are part of the committee’s fifth and final volume detailing Russian interference in the 2016 election. The final report focuses on counterintelligence. The efforts to influence Rohrabacher, who formerly chaired a House Foreign Affairs subcommittee that oversaw relations with Russia, are among examples of the Kremlin’s success in exerting influence in Washington.

The panel examined a trip to Russia that Rohrabacher took in April 2016 as part of a congressional delegation. During the visit, the lawmaker and an aide, Paul Behrends, brushed off the concerns of diplomats in the US embassy and “separated from the group” to attend a meeting with “a close confidant” of Vladimir Putin, the report said. They also accepted a folder containing what a Russian official claimed were “sensitive” materials. These Russian efforts dovetailed with Moscow’s attempts a few months later to help the Donald Trump’s presidential campaign by passing on what they claimed was damaging information related to Hillary Clinton. Rohrabacher did not respond to requests for comment from Mother Jones.

“We were just doing our job,” Behrends said in a short call Tuesday, noting the information, at the time, “had nothing to do with the election.” Behrends, who was fired from his job on the House Foreign Affairs Committee after reports on his ties to Russian lobbyists, said attention to the matter has hurt his career. “I’m tired of this gratuitous bullshit,” he said, before ending the call.

Rohrabacher’s ties to Russia are well-documented. A former speechwriter for Ronald Reagan who was first elected to represent southern California in 1988, he began his career as zealous cold warrior. After the fall of the Iron Curtain and an early-90s drunken arm-wrestling contest with Putin, Rohrabacher became a leading congressional advocate for closer ties to Russia, gaining the moniker, “Putin’s favorite congressman.” The FBI reportedly warned Rohrabacher in 2012 that Russian spies were trying to recruit him.

The committee report describes an April 2016 meeting that Rohrabacher and Behrends had in Moscow with Vladimir Yakunin, the former president of Russian Railways and a close confidant of Putin. Yakunin at the time was under US sanctions. The committee said that Yakunin “is significantly involved in Russian influence activities, including those targeting elections.” Much of the report’s information on Yakunin is redacted.

Rohrabacher told the committee that Yakunin asked him to look at material Russian prosecutors had assembled related to the Magnitsky Act, a 2012 law imposing sanctions on Russian officials. Rohrabacher and Behrends then met with another man, Konstantin Kosachev, the chair of the Council of the Federation Committee on Foreign Affairs. Kosachev was later sanctioned by the United States, and the committee says that he is “significantly involved in Russian influence activities, including those targeting the United States.”

During this meeting, Kosachev handed Rohrabacher a note asking if Rohrabacher would accept “sensitive documents.” Rohrabacher agreed. The lawmaker was then “approached by several individuals who handed him a folder of documents,” the report says. Rohrabacher didn’t know who the men were, but he later told the committee he believed they were from the Russian prosecutor’s office.

The Atlantic revealed details of Rohrabacher’s trip in 2017, reporting that State Department officials in Moscow were concerned that Rohrabacher had met with Russian intelligence agents.

The material Rohrabacher received included unsubstantiated allegations that three Americans—Dirk, Robert, and Daniel Ziff—who had donated money to Hillary Clinton and other Democrats, had engaged in financial fraud in Russia. The allegations were part of a Russian effort to undermine the Magnitsky Act. The Russian material noted that the Ziff brothers had invested with Bill Browder, a former investor in Russia and a major critic of Putin. Browder is a lead proponent of the Magnitsky Act, which is named after Sergei Magnitsky, a Russian lawyer who died in prison in 2009. After returning from Russia, Rohrabacher unsuccessfully attempted to change the name of the law, a step advocated by Russian lobbyists. (Browder has denied the Russian allegations, while the Ziffs have avoided commenting.)

A few months after the delegation’s trip, a Russian lawyer, Natalia Veselnitskaya, outlined the same allegations during a meeting in Trump Tower with Donald Trump Jr., Jared Kushner, and Paul Manafort, who at the time was a top Trump campaign official. Trump Jr. agreed to the meeting after being promised political dirt on Clinton, part of what a British publicist told him was “Russia and its government’s support” for his father. Special counsel Robert Mueller later indicted Veselnitskaya, who remains in Russia, for falsely claiming that she had not worked with Russia’s prosecutor general’s office.

Veselnitskaya pressed for Trump to support the repeal the Magnitsky Act. At the Trump Tower meeting, Trump Jr. said his father would consider doing so if elected, according to Mueller’s 2019 report. (The law remains in effect.)

The committee said that the substance of the documents Veselnitskaya brought to the 2016 meeting and the ones Rohrabacher received “are similar, and parts of the two documents are nearly, or completely, identical.”

Although the information Veselnitskaya provided at the Trump Tower meeting proved politically useless, Rohrabacher’s receipt of the same material months earlier from the Russian government supports the conclusion that the Kremlin was involved in both efforts.

“You won’t believe it: he supports the annexation of Crimea to Russia,” Butina wrote, also noting Rohrabacher’s opposition to US sanctions on Russia.

“Precisely for this reason I think that he is under the watch of the RF MFA,” Torshin responded, referring to Russia’s Ministry of Foreign Affairs. It’s not clear what “under the watch” means.

Rohrabacher has denied any clandestine ties to Russia and has publicly promoted his views. In 2018, Rohrabacher defended the Trump campaign officials’ decision to meet with Veselnitskaya. He told Mother Jones‘ David Corn: “There’s not a person in this town who would not take a meeting to get material like that.”

Such views contributed to Rohrabacher’s defeat later that year by Democrat Harley Rouda. Rohrabacher has since moved to York, Maine, and has become a lobbyist. A longtime advocate of legalizing marijuana, he has worked as a consultant for cannabis companies. In May, he registered to lobby Congress and Vice President Mike Pence’s office for a Virginia biotechnology company, Linear Technologies, that says it is working on a “cure for Covid-19 and other diseases.” Linear is led by Tim Yale, a Republican operative from Rohrabacher’s native Orange County who says he is is also working with Rudy Giuliani on a documentary related to Joe Biden and Ukraine. Giuliani has pushed unsubstantiated allegations made by pro-Russian Ukrainians, including one parliamentarian who a top US intelligence official recently warned was “spreading claims about corruption” meant to undermine Biden.

The Senate committee’s report recommends steps for members of Congress to avoid being manipulated by foreign intelligence, urging congressional leaders to work with the US intelligence community to assess risks of foreign travel. These recommendations appear to be based on Russia’s success in cultivating Rohrabacher.

This article has been updated with comments from Paul Behrends.