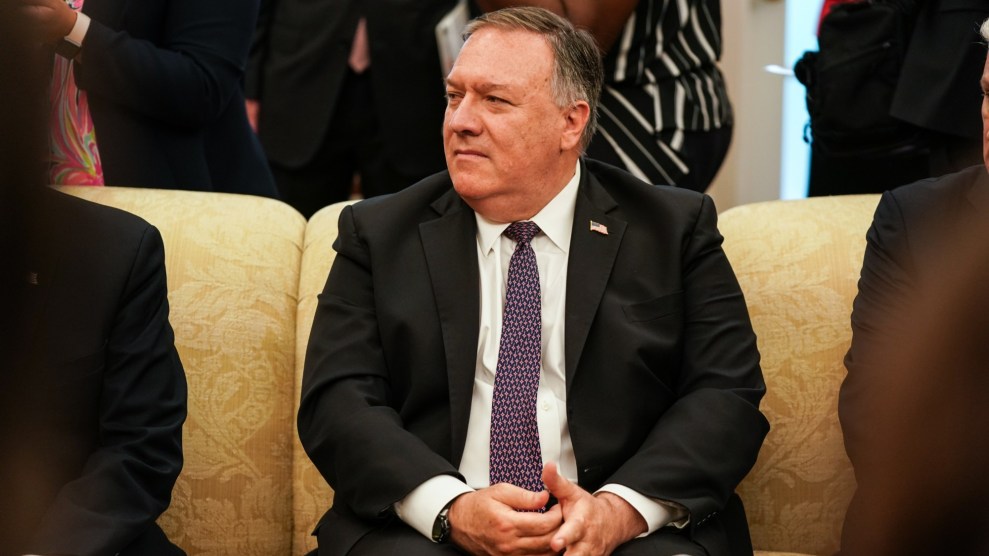 Last month, in a video seemingly devoid of irony, former ambassador to Germany Richard Grenell declared that “President Trump is the most pro-gay president in American history.” Believable perhaps if one’s head has been buried in sand for three years, Grenell’s video was part of an outreach effort by Log Cabin Republicans and other right-leaning groups hoping to persuade LGBTQ voters to back Trump.

Left out was any mention of the steady, faith-based crusade taking place in Trump’s State Department, where anti-LGTBQ views and policies have increasingly become standard under the leadership of Mike Pompeo.

“There has been a steady drumbeat of anti-LGBTI efforts.”

Pompeo, who took over at Foggy Bottom in April 2018, has long opposed same-sex marriage and once described homosexuality as a “perversion.” He’s maintained close ties with the Family Research Council—a Christian lobbying group that believes “every person is defined by their immutable, in-born biological sex”—and frequently sits for interviews with its leader, Tony Perkins. Pompeo has made no secret of his reliance on conservative Christian values to guide his decisions at State. Last year, he gave a speech on “being a Christian leader” to members of a Christian mental health counseling organization that, in its code of ethics, says, “Christian counselors do not condone or advocate for the pursuit of or active involvement in homosexual, bisexual or transgendered behaviors and lifestyles.”

But even by Pompeo’s standards, the State Department’s recent anti-LGBTQ agenda has been shocking. Last year, he unveiled a specious Commission on Unalienable Rights, charged with separating what he described as “unalienable” rights from the kind created by “politicians and bureaucrats.” The commission’s final report, released last month, unsurprisingly deemed marriage equality and abortion as “divisive social and political controversies,” not rights worthy of the same esteem as, say, religious freedom. Since the publication of the report, Pompeo has pushed the commission’s findings internally and set up an event centered on the report at the United Nations General Assembly.

With the commission’s views underpinning department policy, State officials have barred embassies from flying Pride flags, denied intersex and non-binary people a gender-neutral option on US passports, and refused to sign several international statements recognizing the human rights of LGBTQ people. “I think there has been a steady drumbeat of anti-LGBTI efforts,” says Mark Bromley, chair of the Council for Global Equality, which advocates for global LGBTQ rights as a central part of American foreign policy. “There was a steady trickle of that over the past three years,” he added, “but it seems to be coming to a head in a number of different places.”

The State Department is just one of several government bodies in the Trump era that has become more hostile to LGBTQ people, especially transgender people. The Defense Department banned trans people from serving openly in the military—and then falsely claimed it hadn’t done so. The Department of Education rescinded Obama-era guidance allowing trans students to use their preferred bathroom, while the Health and Human Services Department attempted to roll back protections that prevent insurers and medical providers from engaging in anti-trans discrimination. (A federal judge blocked the HHS proposal last month.)

What distinguishes Foggy Bottom is the breadth and shamelessness of its attacks on LGBTQ rights. The US delegation to the United Nations has spent the last three years pushing to remove neutral descriptors like “gender” from documents promoting human rights and rights for women. In one draft report on human trafficking from October 2018, the United States wanted to replace the phrase “gender-based violence” with “violence against women,” the Guardian reported. A State Department spokesperson said at the time that the move was not part of an effort to exclude transgender people. But at a UN conference the following year, US negotiators again sought to amend a document about gender equality to clarify that it “was referring only to women and girls,” Foreign Policy reported. As if there was any ambiguity about the motivation behind the effort, Ambassador Cherith Norman Chalet, Trump’s acting deputy representative to the UN, removed any doubt when she defended the US position in a March 2019 speech. “Let’s be clear—we are not about gender jargon,” she said. “We are about women. Women and girls. The life of all women and girls.”

The department has been engulfed by internal controversies, as well. A State employee told the department’s inspector general that Mari Stull—a former wine blogger who joined State’s International Organization bureau—had “raised objections” to a candidate for the role of deputy director for the Office of Human Rights and Humanitarian Affairs because of that candidate’s past work on Palestinian refugee issues and “on gay and lesbian rights.” According to a 2019 inspector general’s report, other employees said they’d “heard similar criticism” of the candidate by Stull, who left the department last year. Another employee contacted the IG’s office after being “disturbed” by a conversation with former Assistant Secretary of State for International Organization Affairs Kevin Moley, who had allegedly said Stull did not find the candidate to be “trustworthy” because of the candidate’s Palestinian rights work and “relationship with the gay and lesbian community.” In an interview with the IG, Moley denied ever hearing Stull criticize the staffer’s ties to the LGBTQ community. Stull declined to speak with the IG’s office for its report and did not respond to a request for comment from Mother Jones.

For his part, Pompeo has done little to combat anti-LGBTQ attitudes among his subordinates. “State is led by someone who unabashedly opposes marriage for same-sex couples, who has elevated other anti-LGBTQ people to positions of power within his agency, where they are then able to ingrain their discriminatory views into policy,” Molly Bangs, director of Equity Forward, an advocacy group that promotes reproductive rights and equality for LGBTQ people.

Even ostensible efforts by the State Department to support LGBTQ people have run into headwinds under Pompeo. Months before he praised Trump as the “most pro-gay president in American history,” Grenell launched an international push to decriminalize homosexuality. Even though Trump at first appeared not to know the effort even existed, he eventually warmed to it and tweeted approvingly of this “global campaign to decriminalize homosexuality.” But outside of a few meetings, this initiative has not accomplished much.

As I reported last year, Grenell’s work in Berlin did not seem to be well-coordinated with the officials working under Pompeo in Washington. Any effort to decriminalize homosexuality abroad would likely need to be run through State’s Bureau of Democracy, Human Rights and Labor. But the bureau’s staff was left out of the loop, and its Senate-confirmed leader, Robert Destro, seems to be aligned more with Pompeo’s worldview than with Grenell’s. Before entering government, Destro argued that same-sex couples are not protected under sex discrimination laws and once described marriage between a man and woman as “the very institution on which the entire natural, legal and social order depends.”

When asked if Grenell’s initiative was still ongoing, a State spokesperson said the department “works tirelessly” to protect the human rights of all people, adding, “The United States advances LGBTI rights through bilateral and multilateral channels, raising official concerns with governments both publicly and privately, coordinating our response with like-minded countries, and offering emergency assistance to LGBTI persons at risk.”

If the State Department under Trump was actually serious about helping LGBTQ people, it could start by reversing discriminatory policies created under past administrations. Animosity toward Obama-era regulations is, after all, a defining feature of the current administration. But State has actually waged a series of bitter legal battles to preserve anti-LGBTQ policies left over from Trump’s predecessors.

In one such case, Dana Zzyym, an intersex Navy veteran, sued the State Department in 2015 over the department’s refusal to provide them with a passport that identified their gender as neither male nor female. After a federal judge in Colorado ruled in Zzyym’s favor in 2018, the State Department, by then under Pompeo’s leadership, appealed. In May, a federal appeals court noted that requiring Zzyym to select a gender that’s not their own “injects inaccuracy into the data” and ordered the department to reconsider Zzyym’s application.

Late last month, the department appealed a federal court ruling that granted citizenship to a child who had been born outside the country to a gay couple via a surrogate. Under a policy that predates the Trump administration, the State Department does not consider children born abroad to be citizens unless they have a genetic relationship to an American parent.

Just over a year ago, Roee Kiviti and his husband, Adiel, sat in a federal building in West Los Angeles, waiting for their daughter’s passport to be approved. She had been born via a surrogate in Canada, using Adiel’s genetic material. Having already gone through the same process when their first child—a son who had been born using Roee’s genetic material—they didn’t expect much trouble. But the process quickly turned into a nightmare. After initially granting her a passport, the State Department ended up denying her application. The Kivitis soon became one of several recent couples to sue over the policy, which they believe is needlessly discriminatory against same-sex parents and their children.

Roee told me that straight couple after straight couple walked by him to get the necessary paperwork, while he and Adiel were questioned about their daughter’s parentage. Even though the Kivitis are married and are both US citizens, their child was considered by State officials to be “born out of wedlock.” Under the department’s interpretation of the Immigration and Nationality Act of 1952, Adiel would have needed to reside in the United States for five years prior to their daughter’s birth for her to be considered a citizen at birth. Because he had not, State officials denied the request.

In the Kivitis’ case, a federal judge concluded that the department’s interpretation of the law “appears to advantage certain opposite-sex couples as compared to same-sex couples” and ordered that the Kivitis’ daughter be considered a US citizen by birth.

The State Department insists that its policy is meant to be neutral and is not targeted at same-sex couples. And Grenell, when pressed for his views on the matter, claimed it has “nothing to do with being gay.” Congressional Democrats disagree. Last year, they blasted the policy as “a thinly veiled attack on L.G.B.T.Q. Americans” and urged Pompeo to rescind it.

Three federal judges have now ruled against the administration on the matter. But the State Department has chosen to continuing fighting in court, filing an appeal that could result in the Kivitis’ daughter losing her passport.

“It’s infuriating,” Roee Kiviti told me. “Not just to me as the parent, as the plaintiff, as an LGBTQ parent, but as an American whose tax dollars are being wasted to fight our family.”