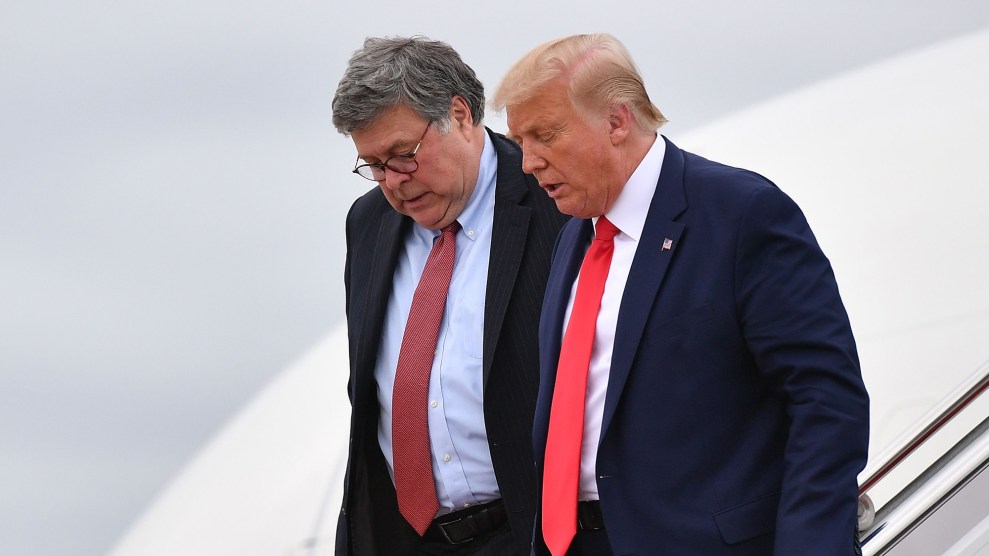 A pattern has emerged in recent years that’s easy to spot. Right before an election, Republican officials in battleground states announce voter fraud investigations. The goal is obvious: suppressing turnout. But what’s new this year is that it this underhanded tactic is being employed by the president and the Justice Department. The DOJ has long prohibited its prosecutors from public investigations that may sway the outcome of an election or taint its legitimacy. But under Bill Barr, the Trump administration has decided to break this rule, unleashing the agency to use its law enforcement powers for political ends.

Two stark examples of this strategy come from Alabama and Georgia. In 2017, ahead of Alabama’s special Senate election, the Republican secretary of state, John Merrill, claimed that nearly 700 people had illegally voted in the Republican primary. He wanted to prosecute the alleged offenders for felonies that would carry a prison sentence of up to 10 years. But Merrill had overblown an insignificant incident. Probate judges ultimately found that 140 people had voted in the Democratic primary, then illegally voted in the Republican Party’s runoff. That’s likely because so-called “crossover voting” was legal until the state legislature made it a crime earlier that year—a change Merrill did very little to publicize. Judges recommended no cases for prosecution, and the issue ended with a whimper. But not before Merrill’s claims generated scary headlines about voter fraud and felonies carrying 10-year sentences. It was a ploy straight from the voter-suppression playbook.

A similar tactic was employed in Georgia in 2018. Two days before the midterms, Secretary of State Brian Kemp came out with an explosive announcement: he was investigating the state Democratic Party for attempting to hack into the state’s voter registration system. At the time, Kemp was both the state’s top election official and the Republican nominee for governor in a dead-heat race against Democrat Stacey Abrams. Kemp had a history of bogus voter fraud allegations against his political opponents, and many recognized the brazen tactic this time. Election law expert Rick Hasen called it “perhaps the most outrageous example of election administration partisanship in the modern era” and “banana republic stuff.” But the allegation allowed Kemp to accuse his opponent and the opposition party of a serious crime, distracting from his own failures as secretary of state. Kemp won a narrow victory by less than 55,000 votes. In May 2020, the state’s attorney general, a Republican, confirmed what was suspected all along: there was no evidence of any crime.

Over the last month, the Trump administration has taken a page from Alabama and Georgia. In September, Attorney General Bill Barr informed President Donald Trump that nine mail-in military ballots, seven of them cast for Trump, were discarded at an election office in Luzerne County, Pennsylvania. The White House press secretary told reporters that “ballots for the president” had been “cast aside.” Trump hyped it in an interview on Fox News Radio, prompting the local US attorney investigating the incident to put out a (inaccurate, then corrected) statement about the investigation. The situation quickly went viral, generating hype about fraud that the president and his campaign have been trying to gin up for months (actually, years). While still under investigation, there is no evidence of malfeasance in Pennsylvania. It appears a single contract worker at the election office had tossed the ballots in a Republican-controlled country, and that election officials had quickly alerted authorities, appropriately handling the situation. Yet Trump and the Justice Department had successfully generated news about voter fraud, a central strategy as the Trump campaign and the Republican National Committee fight court battles to make it harder to vote by mail and prepare to contest absentee ballots after the election. The wrongdoing was on the part of the Trump administration.

“The GOP has practiced a simple playbook for *years*: make up a bonkers story about massive fraud & announce an investigation,” Daniel Nichanian, founding editor of the Appeal’s criminal justice-focused Political Report, tweeted after the Pennsylvania incident, linking to the previous episodes in Alabama and Georgia. “Generate breathless headlines & mistrust, & goes viral. Later when story fizzles, that gets tiny shred of attention.”

It’s not just Georgia and Alabama. GOP officials and operatives have a long history of making false allegations of voter fraud, only to see their accusations fall apart once scrutinized. But airing such charges right before an election threatens to destabilize and delegitimize it. As in Alabama and Georgia, the allegations can be used to scare voters away from the polls for fear of prosecution or attack a political opponent. But it’s particularly shocking for the US Justice Department to engage in these scare tactics.

Remember the DOJ announcement of voter fraud in Pennsylvania earlier this week? Not only did it violate DOJ policy, not only did they get the facts wrong & have to delete the release, now we learn, there was NO voter fraud at all, just administrative error https://t.co/rpYbbOrDsB https://t.co/lK3ZRb6S76

Not only was it inappropriate for the agency to comment on the ongoing investigation in Pennsylvania, but doing so violated a longstanding department policy not to interfere in elections for fear of influencing the results. A department handbook warns that starting public investigations close to an election “runs the obvious risk of chilling legitimate voting and campaign activities. It also runs the significant risk of interjecting the investigation itself as an issue, both in the campaign and in the adjudication of any ensuing election contest.” There are instances in which the agency has broken with this policy—including, infamously, James Comey’s decision to repeatedly update the public on an investigation into Hillary Clinton, helping to elect Donald Trump—but these guidelines have acted as a bulwark against election interference by government officials for decades.

Until last week. On Friday, the Justice Department rescinded part of this guidance, in place for at least 40 years, freeing prosecutors to launch public election-related investigations during the run-up to Election Day. According to ProPublica, the department’s Public Integrity Section has informed federal prosecutors of a new “exception to the general interference with elections policy.” The exception cites investigations into any alleged election offense by a federal official or employee, including employees of the US Postal Service and the Department of Defense. The exception is broad, but it singles out the Postal Service for scrutiny just as Trump, his campaign, and his party seek to restrict mail-in voting through lawsuits and contest counting of mailed in ballots.

The updated policy likely precedes an increase in fraud allegations from the Justice Department itself. And it appears to be part of Barr’s ongoing effort to transform the department into an arm of the Trump campaign, ready to engage in a longstanding GOP voter suppression tactic—and possibly aid the Trump campaign’s legal efforts to get ballots tossed during the vote-counting process. “It’s incredibly painful for me to say,” former DOJ civil rights official Justin Levitt told ProPublica, “but given what we’ve seen recently, Americans shouldn’t trust DOJ announcements right now.”

When Barr was confirmed in February 2019, the initial consensus was that he would play by the rules and respect the Justice Department’s longstanding role as an independent institution. Barr quickly showed that confidence in him as a by-the-book institutionalist was misplaced. He misrepresented the findings of Robert Mueller’s investigation into Russian interference so significantly that a federal judge later said in a ruling that Barr’s “lack of candor specifically call[s] into question Attorney General Barr’s credibility.” Barr set up his own investigations into Trump’s wild allegations of DOJ misconduct against his 2016 campaign and pushed to release it before the 2020 election, generating his own October surprise. Barr has interfered in department investigations on behalf of Trump cronies Roger Stone and Michael Flynn. He ousted the US attorney in the Southern District of New York who was investigating Trump’s allies, including Rudy Giuliani, in an episode that blew up in Barr’s face. This summer, Barr played a visible role in Trump’s war against Black Lives Matter protests, ordering federal forces to use chemical irritants against peaceful protesters in Lafayette Park across from the White House so that Trump could stage a photo op at St. John’s Church.

Since Barr has torched his credibility, any allegations of fraud emanating from the Justice Department in the coming weeks should be viewed skeptically. Barr is using an old playbook. You’ve been warned.