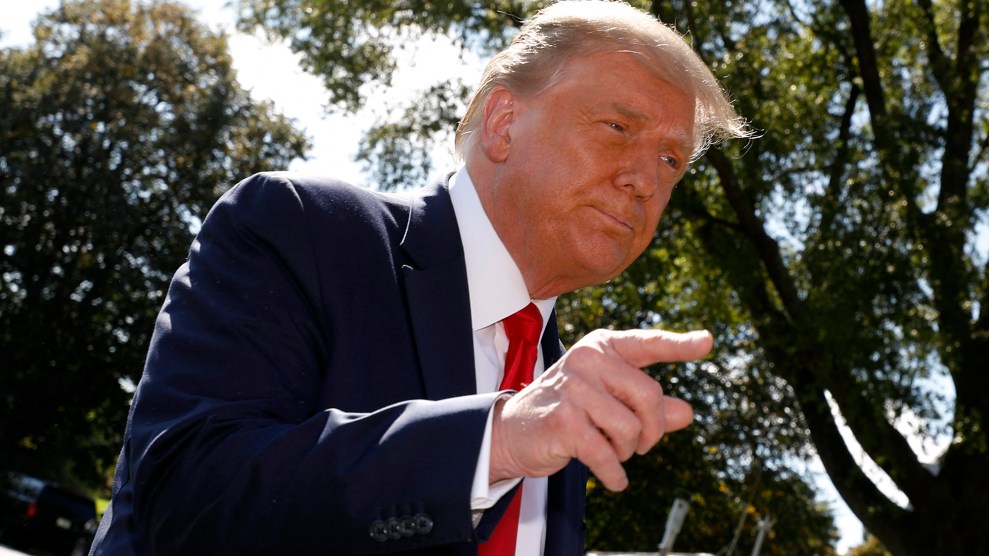 On Wednesday—one day after the debate in which he refused to condemn white supremacists and told a neofascist street gang to “stand by”—President Donald Trump reprised his bigotry at a campaign stop in Duluth, Minnesota. There, in front of a few thousand supporters at an airport, he attacked the state’s Somali American community and accused former Vice President Joe Biden of wanting to turn Minnesota into a “refugee camp.”

Trump warned his supporters that Biden had a “plan to inundate your state with a historic flood of refugees.” Those refugees, he added, would be “coming from the most dangerous places in the world, including Yemen, Syria, and your favorite country: Somalia. Right? You love Somalia.”

At this point, Trump pointed at a man in the crowd. “This guy loves Somalia,” he said, as the crowd booed. “Biden will turn Minnesota into a refugee camp—and he said that! Overwhelming public resources, overcrowding schools, and inundating your hospitals.”

“Biden will turn Minnesota into a refugee camp” — Speaking in a state with one of the largest Somali populations in the country, Trump goads his fans into booing refugees, prompting “lock her up!” chants directed at Ilhan Omar pic.twitter.com/dT2yuHxFDZ

It was not the first time Trump had attacked Somali refugees in Minnesota. Although the state has a long and proud history of welcoming refugees, Trump has very explicitly tried to exploit racist anger about non-white immigrant communities. During the 2016 campaign, Trump told voters in Minnesota that they had “suffered” from the “large numbers of Somali refugees coming into your state.” In 2017, Trump signed a watered-down version of his promised “Muslim ban” that virtually blocked Somalis from coming to the United States. Since then, he has repeatedly erased the US citizenship of Democratic Rep. Ilhan Omar—a Somali refugee. Trump has called Omar an “America-hating socialist” who should “go back” to the country she fled as a child.

“She’s telling us how to run our country,” he said last week in Pennsylvania. “How did you do where you came from? How’s your country doing?”

“And then she tells us how to run our country, can you believe it?” Trump said again on Wednesday, as the crowd chanted, “Lock her up.”

It’s an attack that specifically classifies some people as true Minnesotans and Americans and others as lesser ones, whose right to be here is a privilege that can simply be revoked. When Trump viciously attacked Omar during a North Carolina campaign stop last year, his supporters chanted, “Send her back, send her back.” These not-at-all-coded racist barrages against people of Somali descent are not confined to Minnesota, either; the president’s son, Donald Trump Jr., warned in 2018 that Somalis would “repopulate” Maine unless voters supported a Republican for US Senate.

None of this is new, and that’s the point. Tuesday’s debate set off another round of tut-tutting from members of the press and political world about the president’s reluctance to condemn white supremacists. He blustered his way through another non-answer about the Proud Boys on Wednesday, before catching a flight to his Minnesota rally. On Thursday, White House press secretary Kayleigh McEnany talked around a question about the president’s views toward these bigots.

“This all remains very puzzling,” an angry John Roberts of Fox News said on air a few minutes later. “Stop deflecting, stop blaming the media. I’m tired of it.”

Some pretty striking comments from John Roberts on Fox pic.twitter.com/zqftfKoluF

With all respect to Roberts, a far more credible journalist than many of the people at his network, it is not very puzzling. Trump makes his views on white supremacy crystal clear every time he holds a rally—every time he tells a Muslim, Somali-American congresswoman to “go back”; every time he says that “our country” is not also hers; every time he tells white Minnesotans that refugees from Africa are dangerous and a threat to their way of life. He made his views clear when he said that some white supremacists are “very fine people”; or that neo-fascists should “stand by”; or that a judge born in Indiana is biased because of his “Mexican heritage”; or that people coming across the border are “rapists”; and so on…)

The president doesn’t condemn these bigots because he is one. This whole exercise of asking him to condemn something and then wondering why he doesn’t is not simply pointless—it’s an active refusal to accept the facts as they’ve been laid out. He told you who he is; for once, you can take him at his word.