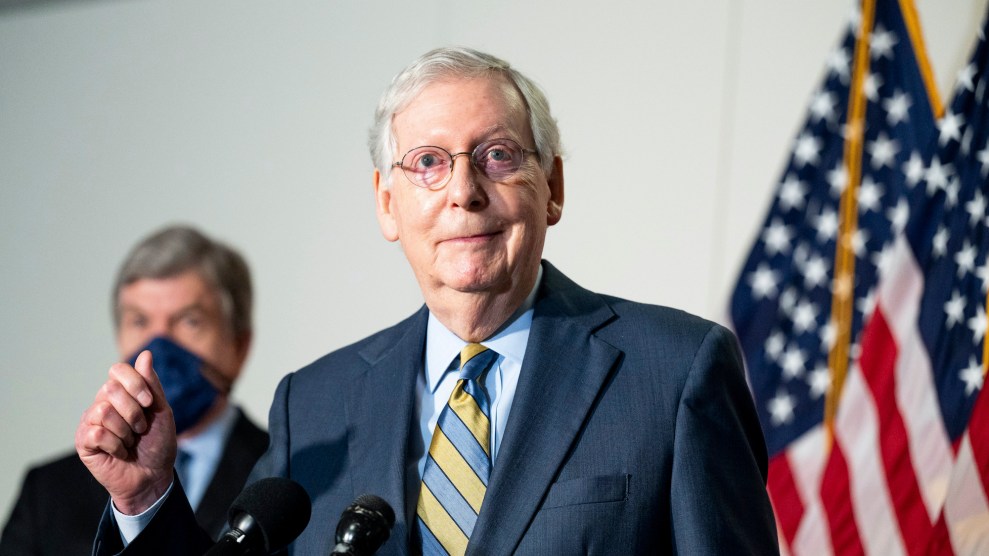 For years, Democratic candidates and campaign finance watchdogs have railed against the injection of increasingly large amounts of money into elections, arguing that it gives candidates who cater to special interests and the wealthy an advantage. Traditionally, it has. Over the years, the candidate who spends the most money typically wins. This year, Democrats, riding a wave of public anger over racial injustice and an outpouring of angst over the death of Ruth Bader Ginsburg and the fate of the Supreme Court, raised more money than ever before, much of it from small donors. A lot of this money flowed to high-profile Senate races, including a long-shot challenge to Senate Majority Leader Mitch McConnell. And yet, in many of these contests, it meant nothing.

In nine of the top 10 most-expensive Senate races, the Democratic candidate raised more than his or her Republican opponent, collecting a combined $595 million. Democrats won just three of those races.

And then there’s the presidential race. Joe Biden’s campaign, along with his allies, raised about $1.3 billion; President Trump and his allies raised about $863 million. While it may take weeks to fully settle the vote counts in every state, Biden is unlikely to beat Trump as resoundingly as he outraised him.

So has money lost its power in elections?

Not quite. According to the nonpartisan money-in-politics website OpenSecrets.org, in eight of the previous nine elections, the top spender has been the winner in races for the House of Representatives more than 90 percent of the time (the 2010 election was the exception, with the spending winner taking the race only about 85 percent of the time). In 2020, that was still true in 90.4 percent of House races.

On the Senate side, the top spender has prevailed more than 72 percent of the time over the last 20 years. In 2020, it happened in 73 percent of the races.

In aggregate, the pattern of candidates who spend the most being most likely to win has actually held up—it’s just that the exceptions to the rule this election were particularly painful (and costly) for Democrats.

In the South Carolina Senate race, Democrat Jaime Harrison raised a record $107.5 million in a bid to unseat Sen. Lindsey Graham, pulling in $57 million in one three-month period this summer. Those numbers would make many presidential primary campaigns envious. To put Harrison’s haul in further context, in 2018, the average Senate candidate raised about $8.9 million. And yet Harrison lost by 14 points.

Sheila Krumholz, executive director of OpenSecrets.org, points to the popularity of the fundraising tool ActBlue, which centralizes billing and processing of online donations—and to a lesser extent its Republican equivalent, WinRed—as the cause of this record fundraising. She says these sites make it extremely easy for candidates who might not have had any fundraising advantage on their own to reap the benefit of a tumultuous national election. All it takes is a link to a candidate’s fundraising page going viral to unleash a flood of donations.

“It’s ubiquitous, and that led to fund-raging—people giving tons of small donations in races across the country where they had no ability to back that up with voting,” Krumholz says, “leading to a lot of money that was driven by passion rather than strategy.”

Candidates didn’t need to have a good shot at winning to attract donations.

Ginsburg’s death and the concern over the balance of the Supreme Court may have helped Maine Democratic Senate candidate Sara Gideon raise $68.5 million (in the seven Senate elections that have taken place in Maine in the last 20 years, all of the candidates combined raised just $47.7 million), but it didn’t mean that was going to be money well-spent. Or even spent at all. According to the last fundraising report filed by Gideon’s campaign, as of October 14 she still had $20.6 million in cash on hand.

There is also a point of diminishing returns, Krumholz says. Even if a candidate outraises her opponent by tens of millions of dollars, it may not make much difference if her rival has raised sufficient funds to cover operatives, ads, and other expenses.

In South Carolina, although Graham went on national television a few weeks before the election and pleaded for donations, saying he was “being killed” by money from the left, he still managed to raise $72 million. That was far less than Harrison but more than enough to get him over the finish line. In fact, prior to 2020, only two Senate candidates had ever raised more than that. Similarly, Sen. Susan Collins (R-Maine) raised $26.5 million, which was dwarfed by Gideon’s fundraising but still a massive amount to spend wooing the 365,000 voters she ultimately needed to win the race.

While fundraising success didn’t translate to electoral success for most of 2020’s Democratic stars, the ability to tap into huge veins of funding is still not a bad problem for a candidate to have, Krumholz says. “It’s not a hindrance,” she says. “But how to leverage it in ways that really take advantage fo the possibilities, I think, remains a challenge.”