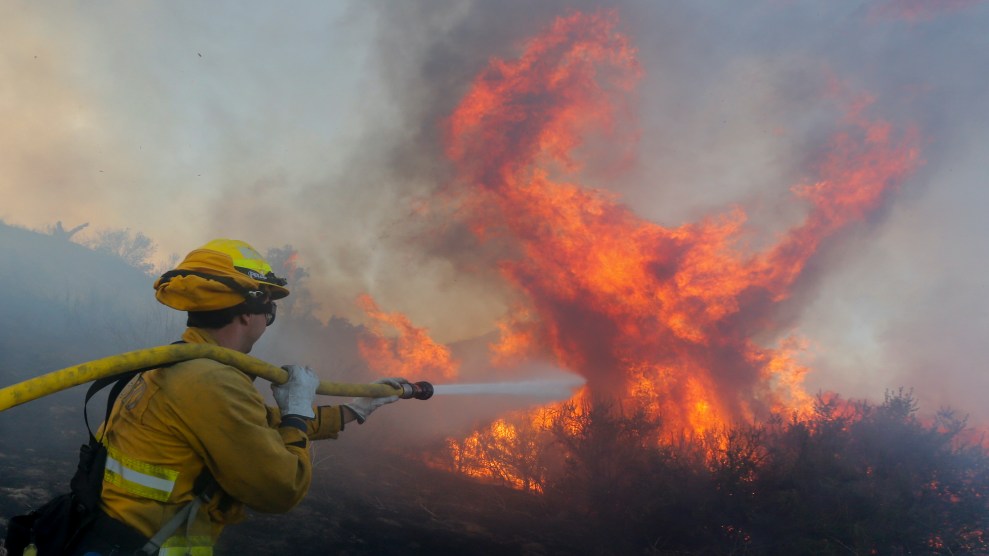 A firefighter battles a wildfire during the Bond Fire burns in Silverado, Calif., on Thursday, Dec. 3, 2020. (Ringo H.W. Chiu/AP)

If you’re unfortunate enough to breathe wildfire smoke, you’re getting a lungful of charred plant material, noxious gases, and—if the fire tore through human structures—incinerated synthetic materials. All across the board, it’s bad stuff, proven to be a severe detriment to human health, particularly for those with respiratory conditions like asthma. And not to pile on the worries, but that haze also turns out to be loaded with microbes like bacteria and fungi.

The problem is, scientists have only just begun to study this smoky microbial community. That led a pair of researchers to publish a new perspective piece in the journal Science last week calling for a multidisciplinary push to better characterize these microbes and determine how they might be making wildfire smoke even worse for human lungs. “It’s not just comprised of particulate matter and gases, but it also has a significant living component in it,” says University of Idaho fire scientist Leda Kobziar, coauthor of the piece. Wildfire smoke may actually spread beneficial organisms for an ecosystem, Kobziar adds, but “what might the consequences be for the spread of pathogens that we know are airborne?”

But hold on a tick: Shouldn’t the microbes get cooked to death in the flames? Well, that’s not giving these microbes any credit. You see, a wildfire burns with different intensities at different spots as it moves across a landscape. “At the smallest scales, complete combustion is coupled with incomplete combustion,” says Kobziar. “Even at one centimeter, you could get very high temperatures for long durations, and at the next centimeter, it can be completely skipped, and no heat at all. So that degree of variability provides a lot of pockets in which these microbes could survive fire.”

“What might the consequences be for the spread of pathogens that we know are airborne?”

Instead of perishing, they hitch rides on bits of charred carbon and in water vapor, as the wildfire’s heat propels all of the muck skyward. If they end up in tiny droplets of water, this could well protect them from desiccation as they travel downwind. “We know that microbes attached to dust particles are certainly transported across continents,” Kobziar says. “So we have no reason to believe that that’s not also occurring in smoke as smoke travels. But how long do they survive, and which ones survive? That is an open question, and that’s exactly the kind of research that we’re hoping this paper will inspire.”

Take, for instance, the fungus genus Coccidioides, whose species live in soil. When a fire tears through a landscape, it disturbs the soil both directly, by chewing it up with flames, but also indirectly: All that hot, rising air creates an atmospheric void near the surface, and more air rushes in from the sides to fill it. This can produce fierce winds that scour the earth, aerosolizing the fungi.

When firefighters inhale this rotten air, the fungi can lead to a condition called coccidioidomycosis, or valley fever, with symptoms including fever and shortness of breath. The condition may progress to cause pneumonia or meningitis, an infection of tissues surrounding the brain and spinal cord. (Infection by another fungus genus called Cryptococcus, also a concern in wildfire smoke, leads to similar symptoms.) Coccidioidomycosis is common enough among firefighters that the Centers for Disease Control and Prevention considers the profession at-risk for the fungal infection.

As wildfires become bigger and more intense thanks to climate change, researchers are finding a troubling rise in mycoses cases (meaning, any disease caused by a fungus) in the American West. Fungal spores “can act as an allergen and initiate asthma development in the atopic population and have been associated with decreased lung function, hospitalizations, and increased mortality,” says Mary Prunicki, director of air pollution and health research at Stanford University’s Sean N. Parker Center for Allergy Research, who wasn’t involved in this new paper. “Overall, many microbes are of concern for human health.”

But what about people far downwind? Wildfires on the West Coast have become so intense that their extreme heat lofts smoke high into the atmosphere, where winds pick up the haze and carry it all the way to the East Coast. So are New Yorkers at risk of infection from fungi in wildfire smoke from California? How about folks who live just 50 miles away from a fire? Or 100?

That’s all not well understood yet. Researchers can sample smoke with drones and characterize its microbial community, but they can’t yet say how this community might be transforming as the smoke plume moves farther and farther away from the fire. “Wildfires are typically associated with high winds and strong vertical transport, which is known to loft particles of biological origin,” says University of Washington atmospheric scientist Brett Palm, who wasn’t involved in this new paper. “It would be interesting to study the viability of these bioaerosols, and to understand how far they can be transported in smoke before depositing or becoming non-viable.”

It’s worth noting, though, that by flying instrument-packed planes through smoke plumes, scientists like Palm are already getting a clearer idea of what’s happening chemically as the smoke ages in the atmosphere, how new compounds form and old ones dissipate. A similar kind of changeover may well be happening with the plume’s microbial community, as some species persist and others perish.

Beyond its constituent microbes, the shape-shifting composition of wildfire smoke, and the extent of its health implications, are still open questions. “The full impacts of wild and prescribed fire smoke on populations—even fairly obvious impacts such as how fire smoke impacts people with cardiovascular disease—is not fully quantified nor completely studied,” says Nancy French, senior scientist at the Michigan Tech Research Institute, who studies wildfires but wasn’t involved in this new work. “There is a need for studies of all components of smoke on health, and microbes are in that category.”

Not only do researchers still have to fully flesh out the research on those individual components of smoke—gases, microbes, particulate matter—but they also have to figure out how those components interact to potentially affect human health. So for instance, we know full well that the charred vegetation in smoke, known as particulate matter 2.5, or PM 2.5, can get deep into the lungs and cause major problems: The smoke decreases the antimicrobial activity of the cells, known as pulmonary macrophages, that clear the lungs of nasty microbes.

Might the smoke’s PM 2.5 and microbes, then, work in cahoots, with the smoke clearing the way for the microbes to enter and harm the body? “Another aspect that is important to mention is the potential interaction between such potential infectious diseases transported through wildfire smoke and well-documented health impacts of PM 2.5 that constitute the smoke including a reduction of lung immunity (e.g. by reducing macrophages’ activity),” writes Tarik Benmarhnia, a climate change epidemiologist at the UC San Diego’s Scripps Institution of Oceanography and School of Medicine, in an email to WIRED. (He wasn’t involved in this new work.)

These open questions are the reason why Kobziar and her coauthors published their perspective piece. “Addressing these unknowns,” they write, “will require a multidisciplinary approach representing expertise in fire ecology, environmental microbiology, epidemiology, public health and infectious disease, and atmospheric sciences.” If scientists can get a better idea of which smoke-borne microbes might affect human health, they can help protect populations, particularly in the American West. Researchers might, for instance, develop an air quality monitoring device to alert public health officials of the presence of a particularly harmful fungus or bacterium.

Perhaps, then, this new paper will light a fire under the field of fire science.