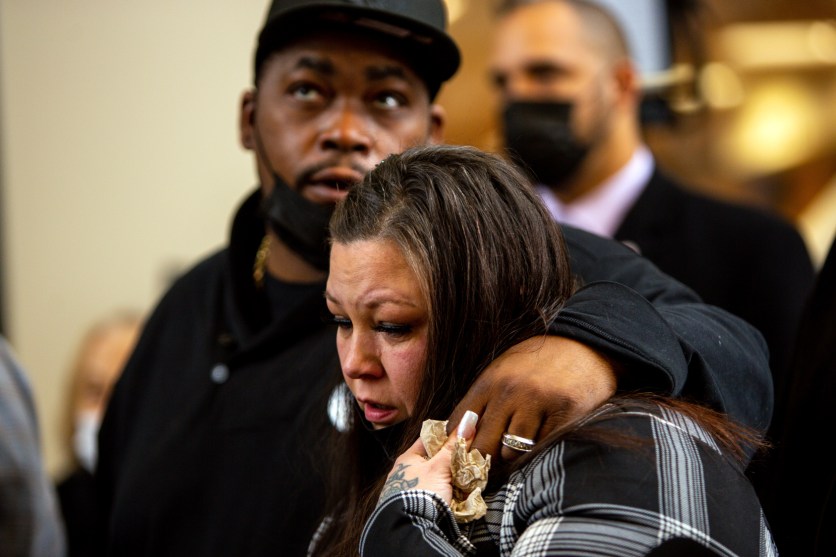 This morning a Hennepin County judge sentenced Kim Potter—the police officer who shot and killed a 20-year old Black man named Daunte Wright last April in the Minneapolis suburb of Brooklyn Center—to 16 months in prison and eight months on supervised release. She will also be fined $1,000.

It is a lighter sentence than some expected. A 26-year veteran of the department, former police union president, and a field training officer, Potter claimed to have been reaching for her Taser when she pulled out her gun and shot and killed Wright. My colleague Samantha Michaels wrote about so-called “weapons confusion” last year. “It’s not ’causes’—it’s just a simple root cause,” an expert in police weapons training told her of the problem. “It’s because they designed the Taser like a gun in order to take advantage of the firearms training that officers do.”

In December, Potter was convicted of first- and second-degree manslaughter. The state sentencing guidelines for first-degree manslaughter charges are up to 15 years imprisonment. The prosecution team, led by Attorney General Keith Ellison, had requested seven years, closer to the guidelines for someone with no criminal record. But, in her closing statements, Judge Regina Chu went below both. Chu said that guidelines can change “depending on the particular facts of the case.”

The particular facts of this case that warranted a “downward departure” from the typical sentencing guidelines according to the judge can be summarized like this: Being a cop is hard.

Chu explained, almost crying, that cops have to make quick decisions in tense and chaotic situations. She noted Potter meant to reach for her Taser. And the judge even took time to differentiate Potter’s charge from the other officers tried in the same court—Derek Chauvin, who killed George Floyd, and former MPD officer Mohamed Noor, who killed a woman named Justine Damond in 2017—because unlike those cases, “this is a cop who made a tragic mistake.”

“White women’s tears trump justice,” said Katie Wright, Daunte’s mother, of the sentence. “I thought my white woman tears would be good enough because they’re true and genuine. But when they’re coerced, coached, and taught by the defense attorney, I guess we don’t have a win in this at all.”

Wright gave testimony at the hearing, urging the judge that the maximum sentencing be applied. Through tears, she read a statement where she referred to Potter not by name but as “the defendant,” because, she explained, Potter continually referred to her son as “the driver” throughout the trial, further dehumanizing him, she said. “For that I’ll never be able to forgive you,” she said. “And I’ll never be able to forgive you for what you’ve stolen from us.”

Daunte Wright’s brother Damik Bryant, who recently confronted pro–Kim Potter protesters outside of the jail where Potter has already served 58 days, read a letter he wrote to Daunte. “I promise I’ll never give up fighting for you because that’s what big brothers do,” he said.

Wright’s father, Arbuey Wright, remembered his time with Daunte as a young child. “I would always tell him, no matter what, I got you,” said Arbuey Wright. “From the day he was born until April 11, I had him. I was always there for my son. Daunte’s life was cut short by Kim Potter, who claims she thought she had her Taser.”

Potter gave her own tear-filled testimony to the family of Wright in which she said she hoped they’d one day find a way to forgive her.

After she read Potter’s sentencing, Judge Chu spoke about the case and shared a quote from former President Obama on empathy. “Learning to stand in someone else’s shoes to see through their eyes is how peace begins,” she said. Judge Chu was not asking observers to imagine what it must feel like to be the mother, father, older brother, or young son of Daunte Wright. Judge Chu was urging empathy toward Potter. “That I granted a significant downward departure does not in any way diminish Daunte Wright’s life. His life mattered,” she said.

In a press conference after the hearing, civil rights attorney Ben Crump expressed surprise at the decision. “I thought we reached a new precedent in America where we were going to see equal justice regardless of the ethnicity of the offending party and the victims,” he said. Wright’s family called the sentence far too lenient, and that it was further evidence of the criminal justice system’s racist double standard applied when white police officers kill Black civilians.

“I feel cheated,” said Arbuey Wright. “They were so tied up in her feelings they forgot about my son getting killed.”