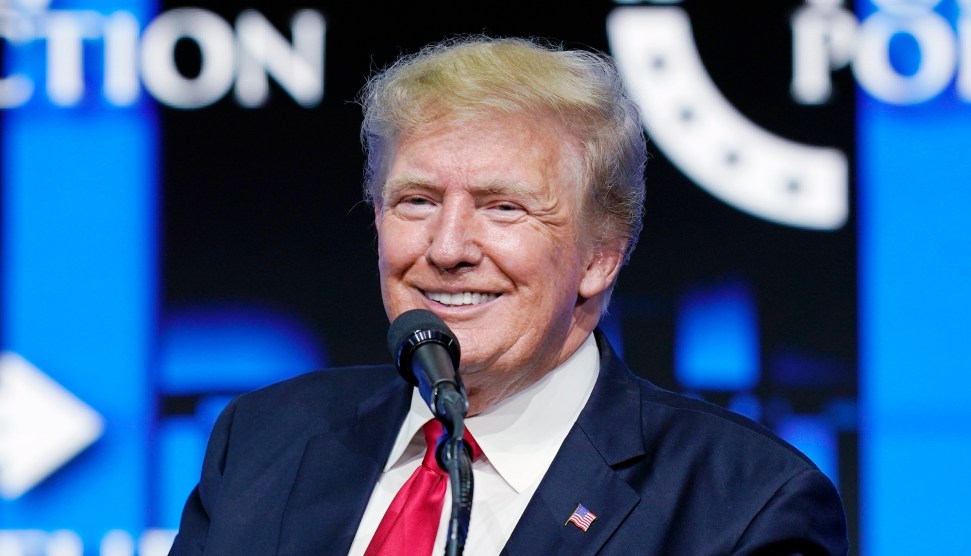 The business model of former President Donald Trump’s new digital media empire is largely dependent on one man: Donald Trump. For all the talk about freedom of speech and fighting the tech monopoly of Silicon Valley leftists, TruthSocial is a digital extension of the Trump brand. Paperwork filed Monday by a company Trump has teamed up with show that no one has any illusions about this. Without Trump, there simply is no TruthSocial.

Trump Media & Technology Group, the parent company of TruthSocial, is “highly dependent on the popularity and presence of President Trump, its Chairman and largest stockholder,” notes Digital World Acquisition Corp, a publicly-traded shell company that plans to merge with Trump’s media venture, in a filing submitted to the US Securities and Exchange Commission. DWAC goes on to warn its investors that this dependence on the defeated president brings with it some risks:

In his time on Twitter, Trump built a massive audience of tens of millions of followers, many of whom loathed him as much as his fans loved him. News cycles and even the stock market were driven by his tweets. So, as dependent as TruthSocial and the rest of TMTG will be on the former president’s continued interest (and existence), having the exclusive rights to his social media postings could also provide a huge boon for the company. But, it turns out, TruthSocial doesn’t have that.

DWAC disclosed in Monday’s filing TruthSocial does have exclusive rights to some of Trump’s social media postings—but it won’t have a monopoly on the type of political red meat that made Trump such a draw on Twitter in the first place. In general, Trump will be obligated to post content on TruthSocial six hours before it can be published anywhere else. But there’s a massive loophole: These rules don’t apply to any content that is related to political messaging, political fundraising, or get-out-the-vote efforts. Those can be posted anywhere Trump wants, whenever he wants.

Which is kind of a yuge exception to an exclusive deal.

According to the Trump Twitter Archive, at least half of Trump’s top 20 most liked tweets were directly about politics, and most of the rest directly related to his role as president, which is a pretty political job. The most popular tweet was his announcement he had Covid, followed by a statement that he was feeling well, which, considering the election that was looming at the time, was arguably as much about “political messaging” as a medical update.

Very few of Trump’s most popular tweets were strictly personal or unrelated to politics. He wished readers Merry Christmas and tweeted about the arrest of rapper A$AP Rocky and the death of Kobe Bryant. But it’s hard to imagine that those types of messages would be that much of a draw for TruthSocial.

DWAC is what’s known as a special purpose acquisition company, or SPAC—a “blank check” company that has gone public with literally no purpose or business. After going public, this empty shell of a corporation looks for another business that does have a purpose and wants to be publicly traded on the stock market but prefers to avoid the potentially onerous and expensive process of going through an initial public offering. If the two companies can merge, it makes for a quick shortcut to going public, which comes with tons of money and investment potential, and is exactly what Trump is seeking. Last fall, DWAC and TMTG agreed to partner up, but logistical hurdles still remain before that can happen. Monday’s filings are supposed to reveal to investors key details about the merger proposal.

DWAC went public with a share price of $10, as all SPACs do, and after announcing the plan to merge with the company behind TruthSocial, the share price shot up to a high of $97. It’s fallen sharply since then, recently trading below $40 before rising back up to $45.75 after Monday’s filing. The price of the stock has fallen and jumped erratically along with speculation about whether Elon Musk’s purchase of Twitter might allow Trump to return to the platform that banned him after the January 6 insurrection. While Trump has said he won’t go back to Twitter, he’s not exactly known for keeping his promises—and he’s only posted twice on TruthSocial since its creation last fall.

While Trump has said he won’t go back to Twitter, he’s not exactly known for keeping his promises.

What’s more, Trump’s deal with TMTG apparently prevents the company from firing him, even if it becomes clear he is no longer helpful to the brand. “The terms of a license agreement with President Trump is not terminable by TMTG when it may be desirable to TMTG,” the DWAC filing states. “The license agreement does not require President Trump to use Truth Social in certain circumstances and could require TMTG to make payments to President Trump for content” on the company’s planned video streaming service.

Specifically, the filing makes it clear that bad, or even illegal, behavior by Trump—the kind of behavior that is often grounds for voiding a contract—would not be a valid reason for TMTG to stop associating with Trump.

“TMTG has entered into a license agreement with President Trump wherein neither the personal nor political conduct of President Trump, even if such conduct could negatively reflect on TMTG’s reputation or brand or be considered offensive, dishonest, illegal, immoral, or unethical, or otherwise harmful to TMTG’s brand or reputation, shall be considered a breach of the license agreement,” DWAC told its investors.

The filing, as it is required to be, is also brutally honest about just what kind of impact Trump can have on a brand. While his Twitter activity was the focus of global attention, DWAC concedes that surveys have shown as little as 30 percent of people say they’d be interested in using a social media site associated with Trump. And, the company notes, its association with Trump could lead to a lot of pressure on advertisers and a lot of motivation for bad actors to try and hack the site, breach its security, or flood it with spam.

Even the fact that Trump’s name is like catnip for many Republicans is potentially problematic, the filing says, as GOP political groups have recently sent out fundraising appeals invoking Trump’s latest business endeavor. One fundraising email from the Republican National Committee asked recipients to sign up for TruthSocial and urged them: “please don’t be the reason Trump’s social site fails.” In its filing, DWAC acknowledges this might not be helpful if people “find these misleading solicitations undesirable.”

In the end, however, it’s possible that none of this will matter. In December, an earlier DWAC filing disclosed that both the SEC and the Financial Industry Regulatory Authority had initiated investigations, looking at whether TMTG and DWAC executives had improperly coordinated with each other before DWAC went public and whether insider trading had occurred around the time of DWAC’s initial public offering. DWAC and TMTG officials have denied any wrongdoing and the filing emphasizes that the mere existence of an investigation doesn’t mean it has merit. DWAC hadn’t mentioned the investigations in several months, but on Monday, DWAC stated that the probes remain active and that it is cooperating with authorities in both of them. Ultimately, those investigations could doom the merger entirely, the company warned investors.