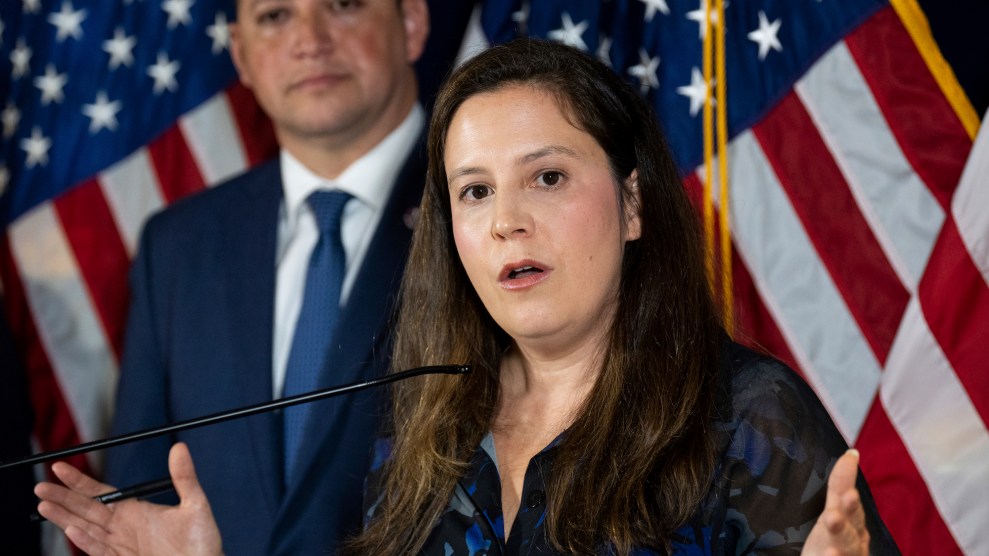 One week after the mass shooting tragedy in Uvalde, Texas, Rep. Elise Stefanik (R-N.Y.), the House Republican Conference chair, reiterated her opposition to gun control during a press conference that was focused on milk choice in school lunches for New York students. But lest anyone think she was indifferent to the slaughter of children, she insisted that this time, she and her Republican colleagues in Congress were not just offering thoughts and prayers. “What we are focusing on is making sure that we have increased resources for mental health,” she said, ticking off a number of measures Congress has passed, with help from Republicans, to improve the mental health system over the past few years, including improving the mental health records that went into the national background check system.

Today when I asked Rep. @EliseStefanik about passing new firearm legislation in Congress in the wake of the Buffalo and Uvalde mass shootings, she had this to say- pic.twitter.com/2Maw9cZH8f

Her comments were immediately criticized as another sop to the gun lobby (the same industry that employs her husband) and code for Republicans’ intention once more to obstruct any meaningful efforts to combat the nation’s gun violence epidemic. After all, Republicans invoke mental illness after every mass shooting. In 2019, after two mass shootings over a single weekend that left 31 people dead and dozens injured, President Donald Trump insisted, “Mental illness and hatred pulls the trigger.” But the funny thing is that Stefanik was right about one thing: Republicans in Congress have quietly done some good work on mental health in the past several years.

After the mass shooting at Sandy Hook Elementary School in Newtown, Connecticut, in December 2012, which left 20 first-graders and six adults dead, it seemed for a brief moment like the country’s political leaders might actually pass some aggressive measures to address gun violence. But then, like now, they fell back on muted calls for better mental health services in lieu of real solutions, like, say, an assault weapon ban. Data from the National Center for Health Statistics show that between 2000 and 2010, only five percent of gun-related murders were caused by someone with a mental illness. And yet, a few Republicans did follow through and introduce legislation to start to reform the tattered mental health system in the years after Sandy Hook, acknowledging that it was failing huge numbers of Americans with serious mental illnesses.

Leading the charge was former Rep. Tim Murphy (R-Pa.), a child psychologist who was forced to resign from Congress in 2017 after having had an affair with a woman half his age and then asking her to have an abortion during a pregnancy scare. But before all that, in 2013, around the one-year anniversary of the Sandy Hook shooting, Murphy introduced the “Helping Families in Mental Health Crisis Act” to try to plug some of the gaping holes in the mental health system. The bill wasn’t sexy; it launched a host of innovation grants to fund pilot projects and other evidence-based efforts to fix the system. It required the federal government to collect more data to figure out where new reforms were needed. And it would have updated the Health Insurance Portability and Accountability Act to address some parts of the privacy law that prevent families of adults with mental illness from communicating with doctors about their loved ones. Plus it proposed strengthening measures that require insurers and federal health programs to treat mental illness on par with other diseases.

Then-House Majority Leader Paul Ryan lent his support to Murphy’s bill in 2015, after yet another mass shooting, this one in San Bernardino, California, in which 14 people died and 21 others were injured. “I think we need to improve our mental health laws so we can address these problems before they get out of control,” Ryan said. “Mental health is a component to a lot of these shootings that, I think, we have not looked at seriously enough.”

It took three years, but finally, a watered-down version of Murphy’s bipartisan bill was rolled into the omnibus 21st Century Cures Act, which added funding to the National Institutes of Health and tackled everything from Lyme disease to opioid overdoses to prescription drug development. President Barack Obama signed the bill in December 2016. Among other things, the measure created the first cabinet-level position of Assistant Secretary for Mental Health and Substance Abuse Disorders at the US Department of Health and Human Services to coordinate mental health research and programs across the federal government. Other provisions were designed to help people with serious mental illnesses such as schizophrenia and bipolar disorder get treatment in the community. The bill authorized suicide prevention grants and created new requirements for various government agencies to collect data on everything from psychiatric bed availability to the involvement of mental illness in homicides.

“The federal legislation that makes up the Cures Act is very much systemically focused,” says Lisa Dailey, executive director of the Treatment Advocacy Center, a nonprofit focused on mental health reform and research. “It’s addressing many years of kind of business-as-usual that wasn’t working very well. A lot of the things that were addressed might not be very easily visible, but they were things that needed to be addressed.”

The law, which is up for reauthorization this year and has bipartisan support, became the most significant mental health reform measure in the US in 50 years. And yet, even with these efforts, data indicate that about 40 percent of people suffering from a serious mental illness never received any sort of mental health care in 2020. Moreover, you’d be hard-pressed to make the case that the law prevented a single mass shooting, given how many of them there have been since Obama signed it. There were 45 such episodes between January 2017 up to and including the Uvalde shooting in which three or more people were killed in an indiscriminate public rampage, according to this Mother Jones database. There were 31 such shootings in the six years before the bill passed.

If Republicans are serious about wanting to do more to improve the mental health system, that’s great. From a dire lack of psychiatric hospital beds to a shortage of mental health professionals and school counselors and research on brain diseases, the need is obvious. But none of those initiatives are likely to put a dent in the nation’s gun violence problem without a concomitant effort to control access to firearms. Just consider the recent school shooting that took place a few miles from the US Capitol a month before the Uvalde elementary school bloodbath.

In April, a 23-year-old man named Raymond Spencer set up a sniper’s nest in an apartment across the alley from the Edmund Burke School, a private school in northwest DC. At 3:15 p.m., just at dismissal time, he fired hundreds of bullets into the school with a semi-automatic weapon he’d purchased legally in Virginia. Set up on a tripod, the gun was equipped with a scope with a camera attached to it that he used to record a video he posted of the shooting on 4chan. The circumstances of this shooting contradict nearly all of the GOP talking points about preventing school shootings with mental health care and armed guards. Burke had two security guards on duty that day, both armed—one a retired Metropolitan Police Department officer, the other an off-duty DC cop. Retired officer Antonio Harris, who was outside the building helping direct traffic when the shooting started, became one of the first victims and the most seriously injured after being hit from hundreds of feet away.

Three other people were injured, including a 12-year-old student. By some miracle, no one was killed, but it took police hours to find the shooter, leaving kids locked down in terror in the school waiting to be rescued until long into the evening. When police finally found Spencer’s apartment, he killed himself with a handgun as they opened the door. Police found four assault weapons, two handguns, and nearly a thousand rounds of ammo among Spencer’s possessions.

More than a month later, we still don’t know much about Spencer other than that he worked as a lifeguard in Montgomery County, Md., during high school. He’d updated the Burke Wikipedia page while he shot at its students to reflect the shooting, but no one seems to know why he targeted the school. He’d never been a student there. Estranged from his family for more than a year, he wasn’t in school. He didn’t have a job, a partner, or any current friends who have come forward to talk to the media about him. He’d had no previous encounters with the police or mental health services.

“This guy was just an absolute loner,” D.C. Police Chief Robert J. Contee III told the Washington Post. “A lone, motivated person,” Contee said, with “no history of law enforcement contact, decides to go off the rails. How do you prevent something like this?”

The answer, of course, is not more psychiatric beds or even more psychologists. The one thing—the only thing—that served as a red flag in Spencer’s case was the fact that he had bought enough high-powered weapons and ammo to effectively arm a small cell of Ukrainian resistance fighters. If he hadn’t been able to buy assault weapons with high-capacity magazines and massive amounts of ammo legally, Raymond Spencer might not just be alive, but he might have simply remained an unhappy loner who someday might have been able to take advantage of some of the mental health reforms Republicans have succeeded in passing.