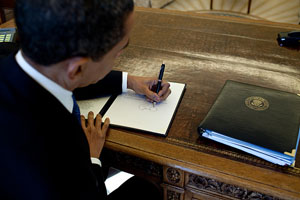 In 1997, in the Japanese city of Kyoto, the Clinton administration agreed to a groundbreaking treaty to combat global warming. And that’s when the trouble started. The Senate had unanimously refused to approve the Kyoto Protocol, and in the end the Clinton administration didn’t even submit it for a vote in the upper chamber. This made the US both the world’s biggest polluter and, ultimately, the only industrialized nation to reject the accord. Now, as world leaders attempt to negotiate a new climate deal at Copenhagen, environmentalists want to avoid a repeat of the Kyoto debacle. That’s why some green groups are urging Obama to do an end-run around the Senate and assert that his presidential powers empower him to commit the US to a climate treaty on his own.

Under Article II of the constitution, a president can sign an international treaty, but it must by ratified by two-thirds of the Senate before it becomes law. But there are also other types of international accords, like trade deals, that can be entered via a congressional-executive agreement, which requires only the approval of a simple majority in both houses of Congress. There’s no ironclad rule that determines which international pacts fall into which category. But neither route is easy. The last treaty to win ratification was the Strategic Offensive Reductions Treaty in 2002, which reduced the nuclear arsenals of Russia and US. Trade agreements are no picnic, either—the most recent pact approved was with Peru in 2007, while Bush administration deals with Colombia, South Korea and Panama are still languishing on Capitol Hill. When you consider that a domestic cap-and-trade bill has yet to win backing from the 60 senators required to even bring the measure up for a vote, the chances of securing 67 supporters for a major international treaty seem very slim indeed.

Against that backdrop, some environmental groups and legal experts are calling on Obama to take unilateral action. At a briefing in Copenhagen last week, Greenpeace and the Center for Biological Diversity (CBD), an Arizona-based conservation group, argued that the president could become a party to a binding climate agreement simply by signing an executive agreement, bypassing Congress altogether. There is “very solid legal footing for negotiating an executive agreement here in Copenhagen,” argued Kassie Siegel, senior counsel of CBD, which has issued a new report outlining what it sees as Obama’s legal options for entering a climate accord. Friends of the Earth has also endorsed this concept. “If he wants to lead the world on climate change, he has to step up to the plate and commit the US to the treaty process,” said FOE president Erich Pica.

The president has full authority to sign a climate treaty on his own, CBD argues, because Congress has already granted him the domestic power to regulate emissions. In making this claim, CBD is referring to a number of federal laws, most notably the Clean Air Act. In early December the Environmental Protection Agency (EPA) issued a final declaration that greenhouse gases are a threat to human health and can be regulated under the 1990 amendments to the legislation. The EPA’s ruling, as well as new rules that it is expected to release, enable Obama to sign an international accord with or without congressional approval, CBD argues.

CBD also cites the Global Climate Protection Act of 1987—a largely forgotten law that empowers the president to “identify technologies and activities to limit mankind’s adverse effect on the global climate” by “slowing the rate of increase of concentrations of greenhouse gases in the atmosphere in the near term” and “developing and proposing to Congress a coordinated national policy on global climate change.” This 1987 legislation also states that the “Secretary of State shall be responsible to coordinate those aspects of United States policy requiring action through the channels of multilateral diplomacy, including the United Nations Environment Program and other international organizations.”

Some legal experts have also made the case that the president does not need the approval of 67 senators before joining a global effort to stop planet-warming pollution. Michael B. Gerrard, a professor at the Center for Climate Change Law at Columbia University’s law school, recently wrote that the administration could enter a binding international climate pact via an executive agreement combined with the existing authority granted to him under domestic law. Michael Widmore, the executive director of the Institute for Policy Integrity at New York University School of Law has echoed this view, noting that a section of the Clean Air act authorizes the president “to enter international agreements… and to develop standards and regulations which protect the stratosphere.” He concluded: “This could provide a foundation for an executive agreement—and Obama wouldn’t need to round up 60 votes from the Senate.”

But even if this course of action is legally feasible, is it actually a good idea? It’s true that the Supreme Court has determined that the federal government can regulate greenhouse gas emissions under the Clean Air Act. But the administration, Congress, and most of the environmental community has stated a preference for a new federal law that specifically deals with carbon dioxide pollution. That’s because only so much can be done to reduce emissions using EPA rules alone.

EPA regulation does not provide the timing or certainty on emissions cuts that other nations are seeking from the US at Copenhagen. For starters, current EPA regulations lack any firm targets about the size of carbon dioxide cuts or a deadline for making reductions. And because such rules are usually implemented in phases, action would probably be slow. EPA regulations would also likely be the target of a deluge of lawsuits, potentially causing long delays and making it harder for other nations to count on US commitments. Nor could EPA rules be used to create mechanisms for financing adaptation and mitigation, seen as essential to any final climate accord. “The sort of international agreement that the United States could be part of while using EPA regulation to deliver on its commitments—that is, an agreement that wouldn’t require Senate or Congressional approval—would look radically different from what most of the negotiators gathered in Denmark have in mind,” wrote Michael Levi of the Council on Foreign Relations.

Siegel of the CBD acknowledged that a legislative solution would be “the best way to go.” But she observed that the “Senate has been standing in the way for 12 years now,” and Obama should not feel compelled to wait. She added: “What we are saying is he is not legally constrained here.”

But other environmental groups warn that trying to act on climate without Congress could be politically disastrous. “He can do a lot of things that a lot of groups want to see him do—if he’s willing to see it kill the Senate [cap-and-trade] bill,” argued Alden Meyer, director of strategy and policy for the Union of Concerned Scientists. “That’s the political reality.”

A solid bloc of Senate Democrats is still unwilling to support a domestic cap-and-trade measure, and at least one has already objected to the mere idea of Obama making non-binding commitments at Copenhagen to targets that weren’t previously approved by the upper chamber. Then there are the Republicans seeking to torpedo climate action outright. On Thursday Sen. James Inhofe briefly touched down in Copenhagen to inform the international community that the US Congress won’t support climate legislation. “You don’t want to feed into that,” said Meyer. A glimpse of the likely GOP line of attack could be viewed in a rather audacious January op-ed by John Yoo and John Bolton—hardly shrinking violets on the subject of expansive presidential powers. The pair warned that Obama may seek to sidestep the Senate and sign a climate treaty alone, and that such a course of action would be an unacceptable threat to the Senate’s constitutional authority.

And the risks aren’t purely political. Getting into a turf war with the Senate could result in very real setbacks for Obama’s environmental agenda. Senate Republicans have already tried once this year to cut off funding to the EPA to prevent it from regulating carbon, and could easily do so again. In addition, if a climate accord hasn’t been ratified by the Senate but is instead implemented via regulations, it could be more easily reversed by Congress or a future president. “The international community has to have the assurance that any commitment by the United States is negotiated on behalf of the country as a whole, and will be lived up to,” said Matthias Duwe, director of the Climate Action Network Europe. “It would be detrimental if there was a rollback afterwards.”

While CBD acknowledges that it’s rare for the US to enter an international pact through a sole executive agreements, it argues that there “is no real dispute” that this type of agreement is binding under international law. But the report provides only a handful of precedents. Some are old (such as 1937 and 1941 agreements with the Soviet Union), and others deal with an extremely unusual or urgent situation (like the Iran hostage crisis). There’s also the question of the legal precedent that would be established by such a move. One of the biggest criticisms of the Bush administration from the left was its aggressive drive to expand executive power, particularly in the national security realm, without appropriate consultation with Congress. If Obama acted alone on climate, it could enable future presidents to follow his example in other areas of foreign policy.

If the US and the rest of the world has learned anything from the Kyoto process, it’s that it’s perilous for an administration to promise policies that will trigger a revolt on Capitol Hill. “It’s not wise for the executive branch to make agreements that go way beyond what they could expect Congress to go along with,” said David Doniger, who served as the director of climate change policy at the Environmental Protection Agency during the Clinton administration and is now policy director of the climate center at the Natural Resources Defense Council.

Still, certain US climate activists insist that the time has come for Obama to deliver big in Copenhagen. Said Steve Herz, climate finance adviser at Greenpeace, “This is precisely the kind of difficult decision we elected him to make.”