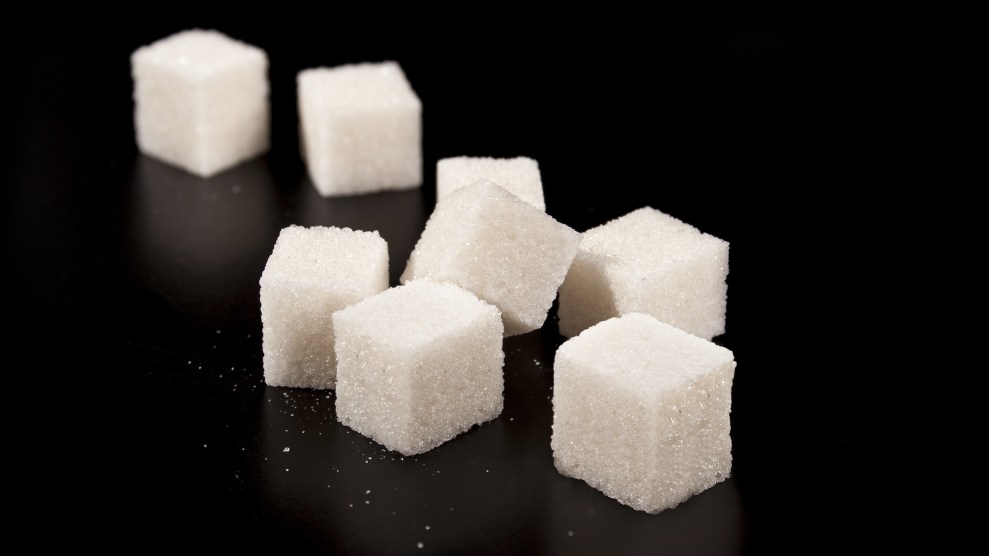 These days, the link between heavy sugar consumption and heart disease is as clear as a glass of Sprite, and readily acknowledged by the American Heart Association. But for decades, Americans concerned about cardiovascular trouble were told that salvation lay in avoiding dietary fat, not sugar. For a blockbuster 2012 Mother Jones piece, Cristin Kearns and Gary Taubes uncovered old documents showing that starting in the 1960s, the sweetener industry used “Big Tobacco-style tactics” to ensure that government agencies would downplay sugar-related health trouble, including including diabetes, obesity, and heart disease.

“Let me assure you this is quite what we had in mind and we look forward to its appearance in print,”  a Sugar Research Foundation official wrote to one of the Harvard researchers.

And now Kearns, a researcher at the University California-San Francisco’s Institute for Health Policy Studies, is part of a team that has found yet another set of documents shedding more light on that shadowy campaign. Their report, published Monday in the journal JAMA Internal Medicine, is required reading for anyone who wants to understand how corporate funding shapes scientific research and ultimately public health policy.

Digging into historic archives from the University of Illinois and Harvard, the group got hold of correspondence between academic researchers and the Sugar Research Foundation, an industry-funded group that has since morphed into the Sugar Association. By the early 1960s, the correspondence shows, Big Sugar had become concerned about a rising tide of research suggesting that excess sugar might be just as threatening to heart health as high-fat diets. The answer, a Sugar Research Foundation official opined in a letter, was to embark on a “major program” to “refute our detractors,” including through industry-funded research. Things came to a head in 1965, when an issue of the prestigious journal Annals of Internal Medicine included three major papers and an editorial implicating sugar in heart disease—which in turn inspired a full-page New York Herald Tribune article on the perils of excess sweetness.

That same year, Fredrick Stare, chair of the Harvard University School of Public Health Nutrition Department and an expert in coronary disease, joined the Sugar Research Foundation’s scientific advisory board, and the group launched Project 226—the funding of a paper by two professors in Stare’s department that would evaluate recent research on sugar’s role in heart disease. For their trouble, the Harvard researchers would eventually earn $48,900 (in 2016 dollars) from the Sugar Research Foundation. The SRF received working drafts of the paper as the project proceeded, the correspondence shows. The Harvard researchers declined to disclose Big Sugar’s funding and involvement when they published the paper in the New England Journal of Medicine in 1967.

By the 1990s, food manufacturers were profitably churning out low- and no-fat versions of sugary stuff like granola bars.

Kearns and her colleagues at UCSF stress that they found “no direct evidence that the sugar industry wrote or changed the NEJM review manuscript.” But they did find that the paper seemed to please its funders. “Let me assure you this is quite what we had in mind and we look forward to its appearance in print,”  a Sugar Research Foundation official wrote to one of the Harvard researchers after reading the paper’s final draft. And it’s easy to see why: The paper downplayed research implicating sugar and concluded there was “‘no doubt’ that the only dietary intervention required to prevent CHD [coronary heart disease] was to reduce dietary cholesterol and substitute polyunsaturated fat for saturated fat in the American diet,” Kearns and her team write.  Sugar, in short, got a free ride.

And as Kearns and Taubes showed in their Mother Jones piece, the industry continued to fund pro-sugar research at prestigious institutions, published in prestigious journals, through the 1970s and ’80s, and the USDA and Food and Drug Administration took a lenient view of the sweet stuff for decades. And the low-fat craze was born. By the 1990s, food manufacturers were profitably churning out low- and no-fat versions of sugary stuff like granola bars, marketed under a health halo.

Since then, the regulatory agencies have largely soured on sugar’s health impacts. Back in May, the FDA announced a new rule requiring food companies to disclose how much on labels how much sugar they’ve added to products, to “reflect new scientific information, including the link between diet and chronic diseases such as obesity and heart disease.” The “new” in that sentence is a bit rich, given how long such concerns have existed, as Kearns and Taubes show.

And while American sweet tooth has waned in recent years, we still take in too much sugar. According to the American Heart Association, “most US adults consume about 22 teaspoons of added sugars a day”—much higher than its recommended maximum amount for men (9 teaspoons) and women (6 teaspoons).

And sugar purveyors are still up to old tricks. Last year, The New York Times showed that sugary-beverage giant Coca-Cola had been quietly funding academic research insisting that lack of exercise, not excess sugar, drives high rates of obesity and diabetes. And as Mother Jones’ Julia Lurie reported last year, Coca-Cola and other sweet-food giants bankroll Together Counts, an educational campaign delivering a similar message to  school kids.