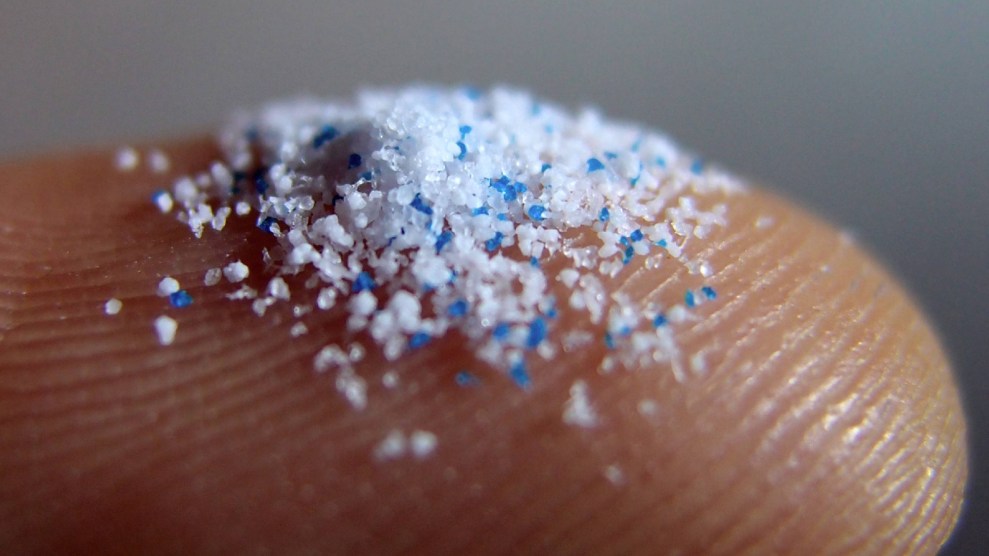 This story was created by the Guardian and is reproduced here as part of the Climate Desk collaboration.

Microplastic pollution has been discovered lodged deep in the lungs of living people for the first time. The particles were found in almost all the samples analyzed.

The scientists said microplastic pollution was now ubiquitous across the planet, making human exposure unavoidable and meaning “there is an increasing concern regarding the hazards” to health.

Samples were taken from tissue removed from 13 patients undergoing surgery and microplastics were found in 11 cases. The most common particles were polypropylene, used in plastic packaging and pipes, and PET, used in bottles. Two previous studies had found microplastics at similarly high rates in lung tissue taken during autopsies.

People were already known to breathe in the tiny particles, as well as consuming them via food and water. Workers exposed to high levels of microplastics are also known to have developed disease.

“We did not expect to find the highest number of particles in the lower regions of the lungs, or particles of the sizes we found.”

Microplastics were detected in human blood for the first time in March, showing the particles can travel around the body and may lodge in organs. The impact on health is as yet unknown. But researchers are concerned as microplastics cause damage to human cells in the laboratory and air pollution particles are already known to enter the body and cause millions of early deaths a year.

“We did not expect to find the highest number of particles in the lower regions of the lungs, or particles of the sizes we found,” said Laura Sadofsky at Hull York medical school in the UK, a senior author of the study. “It is surprising as the airways are smaller in the lower parts of the lungs and we would have expected particles of these sizes to be filtered out or trapped before getting this deep.”

“This data provides an important advance in the field of air pollution, microplastics, and human health,” she said. The information could be used to create realistic conditions for laboratory experiments to determine health impacts.

The research, which has been accepted for publication by the journal Science of the Total Environment, used samples of healthy lung tissue from next to the surgery targets. It analyzed particles down to 0.003mm in size and used spectroscopy to identify the type of plastic. It also used control samples to account for the level of background contamination.

A 2021 study in Brazil on autopsy samples found microplastics in 13 of the 20 people analyzed, whose average age was higher than those assessed by Sadofsky’s study. Polyethylene, used in plastic bags, was one of the most common particles. The researchers concluded: “Deleterious health outcomes may be related to … these contaminants in the respiratory system following inhalation.”

A US study of lung cancer patients in 1998 found plastic and plant fibers (such as cotton) in more than 100 samples. In cancerous tissue, 97 percent of samples contained the fibers and in non-cancerous samples, 83 percent were contaminated.

Huge amounts of plastic waste are dumped in the environment, and microplastics contaminate the entire planet, from the summit of Mount Everest to the deepest oceans. Microplastics have been found in the placentas of pregnant women, and in pregnant rats they pass rapidly through the lungs into the hearts, brains and other organs of the fetuses.

A recent review assessed cancer risk and concluded: “More detailed research on how micro- and nanoplastics affect the structures and processes of the human body, and whether and how they can transform cells and induce carcinogenesis, is urgently needed, particularly in light of the exponential increase in plastic production.”