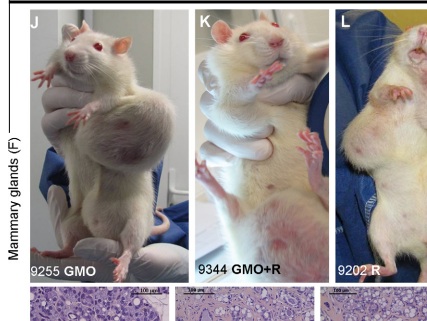 Mammary tumors that developed in rats fed GMO corn and/or low levels of Roundup. Whether the feeding regimes can be said to have caused the tumors remains a matter of debate. From the paper "Long term toxicity of a Roundup herbicide and a Roundup-tolerant genetically modi?ed maize," published in Food and Chemical Toxicology.

This week, a French research team published a paper in a peer-reviewed US journal showing that rats exposed to low doses of both genetically modified corn and the widely used herbicide Roundup had negative health effects. The results, already generating plenty of debate, are not as clear-cut as they seem at first glance. But they do shine a harsh light on the ag-biotech industry’s mantra that GMOs have indisputably proven safe to eat—and establish an urgent need for more long-term research.

Before I dig into the study’s details, it’s worth pondering what we know about the long-term effects of eating genetically modified foods. Surprisingly little, it turns out, given how ubiquitous they are in the US food supply. Genetically engineered seeds first hit commercial farm fields in 1996, and quickly became ubiquitous in the largest and most subsidized of US crops. Today, most non-organic US corn, soy, cotton, sugar beets are GMO—and combined, they provide a vast portion of the sweeteners, fats, and additives used by food manufacturers, and nearly all of the feed used by the meat industry.

Before they ever hit supermarket shelves or factory livestock farms, back in the ’80s, the Food and Drug Administration gave GMOs “generally regarded as safe” status, meaning that the industry had no obligation to conduct long-term safety studies. And since the seed companies wield patent power over their products, researchers have little access to GMO seeds for independent safety testing.

Now, it’s true that GMOs have been proven safe in one sense: No one, to the best of my knowledge, has ever dropped dead from drinking, say, a Coke sweetened with high-fructose syrup from GMO corn, or from peanut butter tarted up with soy oil. But that just means GMOs don’t have what scientists call “acute” effects—severe ones that you notice right away.

But what about “chronic” effects, ones that come on gradually and can’t be easily tied to any one thing? Here we are eating in the the dark. Awash in added sweeteners and fats, the US diet in the aggregate is dismal. Nutrition-related maladies like diabetes, metabolic syndrome, and pancreatic and kidney cancers have been rising for decades and continue lurching upward—as as do rates of food allergies. Life expectancy, after decades of gains, has stagnated—at a level well below those of other industrialized countries.

So are GMOs adding subtly to to this sea of dysfunction? The French researchers’ study (full text), published in the US journal Food and Chemical Toxicity, raises concerns. The study surely counts as the most ambitious and comprehensive safety assessment of GMOs ever conducted. It involved 200 rats and spanned two years, the life expectancy the particular kind of rat used. The longest-running previous study lasted 240 days, Michael Hansen, senior staff scientist at Consumers Union and an expert on GMO research, told me. Industry-funded studies typically last just 90 days, he added.

The researchers sought to determine how eating Monsanto’s Roundup Ready corn affected rats’ health. And they wanted to figure out whether any effects came from the corn itself or any Roundup traces that might come with it. So they separated 200 rats into ten groups: three that had part of their standard lab-rat diet replaced at varying levels (maximum 33 percent) with Roundup Ready corn that had been treated with Roundup in the field; three getting the same feed protocol, but with untreated Roundup Ready corn; three getting no GMO corn but tiny amounts of Roundup in their drinking water at varying levels; and one control group ate two-thirds standard lab-rat chow and one-third non-GMO corn. Each group contained 10 females and 10 males.

So what happened? The researchers say their results, summarized here, show “severe adverse health effects including mammary tumors and kidney and liver damage, leading to premature death,” in both from both Roundup Ready corn and Roundup itself, “whether they were used separately or together.” Interestingly, almost all of the ill effects manifested after 90 days—the industry’s preferred length for its own feeding studies. By the end of the study, the researchers report, “50 percent-80 percent of the females had developed large tumors compared to 30 percent in the control group.” As for males, “Liver congestions and necrosis were 2.5 to 5.5 times higher than in the control group … [and] there were also 1. –2.3 times more instances of ‘marked and severe’ kidney disease.” Overall, among the rats receiving GMO and/or Roundup, “Up to 50 percent of males and 70 percent of females died prematurely, before deaths could be put down to normal ageing, compared with only 30 percent and 20 percent in the control group.”

So does the study close the case—are GMOs slowly killing us? Not so fast. Predictably, industry-aligned scientists are raising questions about the study, but even long-time critics like Consumers Union’s Hansen have concerns. Now, Hansen stresses that the new paper is “longer and better designed than any of the industry studies,” adding that the journal in question, Food and Chemical Toxicity, is “well-respected.”

But the sample size—ten males and ten females per group—is simply too small to draw any conclusions, Hansen says. Moreover, he adds, the researchers used a strain of rat that is known to be highly prone to developing mammary tumors. That factor, plus the small sample size, means that the prevalence of mammary tumors found among the treated female rats could be happenstance, he said.

“I don’t want to trash” the study, said one researcher, “but I just don’t see enough there that’s very persuasive to me at this point.”

However, Hansen told me, while all of the individual comparisons—say, kidney dysfunction or mammary tumors between 10 females eating a certain level of GMO feed and 10 females eating non-GMO feed—are “statistically insignificant” because of sample size, taken as a whole, the results paint a troubling picture. Overall, the study made 54 comparisons between treated rats and control rats, and in all but four of them—two involving females, two involving males—the treated rats showed worse outcomes. “That’s suggestive that there’s something going on and there that should be further research,” he said.

I asked Hansen why serious researchers wouldn’t have used enough rats in each group to get more robust results. He said that multi-year rat studies, especially ones involving so many different comparison sets, are “extremely expensive,” and that the researchers likely did the best they could given their resources.

Another scientist not aligned with industry interests, Ted Schettler, science director of the Science and Environmental Health Network (SEHN), echoed Hansen’s concerns about sample size. And he added another: The authors didn’t include data about the total food and water intake of the rats in the various groups. The amount of food and water animals consume “can affect both tumor development and kidney function,” he said. “And [it] very well may affect mortality.”

In a Wednesday conference call with reporters, I raised Schettler’s concern with study author Gilles-Eric Séralini, a professor at University of Caen in France. Séralini replied that he and his collaborators couldn’t get all the data into their paper because it’s “the longest and most detailed [GMO feeding study] that has ever been done so we couldn’t put [all the data] in one paper.” He said that all the groups had roughly equal feeding and drinking habits, with the exception of the the group that got the highest dose of Roundup, which drank less water than the others. He added that the feeding data, along with comparisons showing more GMO effects, would be published in future papers now in progress.

Schettler added the way the paper presents some of its data is “unusual” and was hard for him to decipher. Overall, he said, he’s “intrigued” by the results, but isn’t convinced. “I don’t want to trash” the study, he said, “but I just don’t see enough there that’s very persuasive to me at this point.” He added: “It does suggest to me that we need longer term feeding studies with GM foodstuff, in a standardized way with the right number of animals in each group so we can pick up the changes and be confident that they exist.” He stressed that using enough rats to show robust, statistically significant results would be very expensive.

So where does all of this leave us? This latest study is hardly definitive, but it provides a disturbing hint that all might not be right with our food—and shows beyond a doubt that further study is needed. Hansen and Schettler’s remarks to me about how proper studies would require a serious commitment of resources reminded me of just how little funding GMO safety studies get here in the United States, the global capital of GMO production and consumption.

Between 1992 and 2002—the period over which GMO crops moved rapidly from test plants to farm fields to dinner tables, the USDA spent about $1.8 billion on ag-biotechnology research—of which about 1 percent went to safety testing, a Union of Concerned Scientists analysis shows. Meanwhile, the ag-biotech industry uses its patent power to maintain tight control over who researches what—and dominates the research agenda at America’s main ag-research universities. When we eat GMOs, as millions of Americans do every day, we’re still eating in the dark. The French study didn’t fully illuminate the situation, but it’s a start.