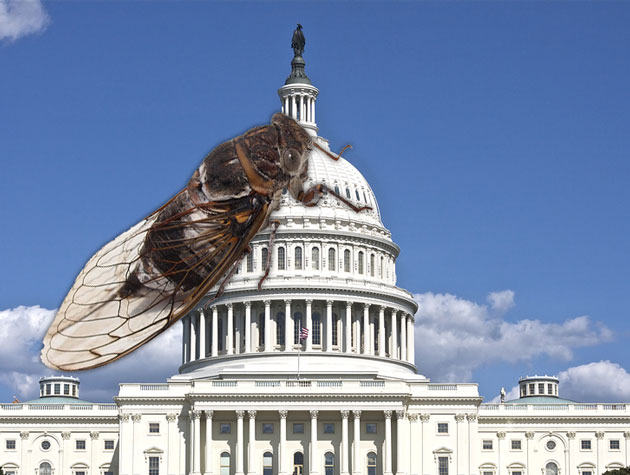 The “Great East Coast Cicada Sex Invasion of 2013” is upon us.

After 17 years of feeding and living under the earth’s surface, billions of “Brood II” cicadas will emerge this summer between Connecticut and Georgia, swarming in thick, forbidding billows of shed exoskeletons and raucous insect lovemaking. (To get an idea of what the cicada mating call sounds like, click here for audio.)

1. Ronald Reagan name-checks the cicada: In June 1987, Greatest President in American History Ronald Reagan delivered one of his weekly radio addresses on the budget plan for fiscal year 1988. In his prepared statement, he used the cicada in a simile to bash Democratic budget proposals:

Like the cicadas, the big spenders are hatching out again and threatening to overrun Congress.

President Reagan then asked the American people to get behind a balanced budget amendment and the line item veto to “make the cicadas in Congress go back underground.”

2. John Kerry and the cicada-morphing attack ad: Reagan wasn’t the only Republican (or politician, for that matter) to invoke cicadas in a political attack. During the 2004 presidential campaign, the Republican National Committee launched a 1:15-long web ad comparing Democratic candidate John Kerry to the “Brood X” cicada. The attack ad includes an up-close shot of a cicada’s face morphing into a picture of a confused-looking John Kerry:

The video, which (naturally) painted Kerry as a serial flip-flopper, was emailed to approximately 700,000 supporters of President George W. Bush: “Every 17 years, cicadas emerge, morph out of their shell, and change their appearance,” the narrator observes. “Like a cicada, Sen. Kerry would like to shed his Senate career and morph into a fiscal conservative, a centrist Democrat opposed to taxes, strong on defense.”

The Kerry campaign and the Democratic National Committee responded to the ad by saying they were “not bugging out” over it.

John Kerry would go on to lose to George W. Bush in the November election by about 3 million votes.

3. Teddy Roosevelt vs. the anti-imperialist cicadas: In 1902, President Theodore Roosevelt gave a Memorial Day speech at Arlington National Cemetery. During that speech, he passionately defended American imperialism in the Philippines and his administration’s policy of imposing “orderly freedom” on the Filipino people.

“Is it only in the Philippines that Americans sometimes commit deeds that cause all other Americans to regret? No!” Roosevelt said. “From time to time there occur in our country, to the deep and lasting shame of our people, lynchings carried on under circumstances of inhuman cruelty and barbarity—cruelty infinitely worse than any that has ever been committed by our troops in the Philippines.”

It wasn’t Mark Twain or the American Anti-Imperialist League who showed up to protest Roosevelt’s speech; it was a horde of cicadas that almost managed to drown out the president’s growling voice: “Invisible choirs of seventeen-year cicadas buzzed in counterpoint to [Roosevelt’s] voice,” Edmund Morris wrote in his 1979 Pulitzer-winning biography The Rise of Theodore Roosevelt.

4. The federal government’s history of telling Americans to not freak out about cicadas: The US government has been reminding Americans not to freak out about the cicadas for decades. And for good reason: In the 1850s, people believed they were an omen of war due to their scary red eyes and the “W” on their wings. In the 1910s, the Kentucky Post reported on panic-stricken crowds arming themselves to the teeth with shovels as they prepared to do battle with the incoming “locusts,” and newspapers ran terrifying headlines like this one: 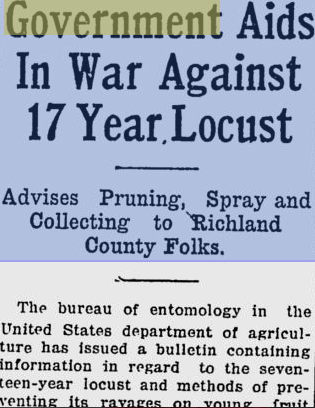 America eventually calmed down: “The government experts assure us that the cicada is not as dangerous or as devastating as he sounds,” a Gazette Times story from July 1923—titled “The Periodical Cicada, Naturalists Alarmed”—read. In the 1930s, government experts also reassured concerned citizens regarding cicada “locusts.” Even in the Reagan era, the government issued an official public pamphlet on the subject of cicadas. The government’s care-free attitude persists today: “The Obama administration currently has no plan to suppress the ‘cicada invasion,'” an administration official tells me. (Partly because, as off-putting as they sound and appear, cicadas are good for plants and the affected environment.)

In 2004, the harmlessness and notoriety of the cicada prompted Brandon Breeden, head writer of the website Cicadaville.com, to spread satirical rumors about how cicadas are “vicious killers seething with deadly venom,” and how “children are [cicadas’] primary source of nutrition.” As a result, Breeden received emails thanking him “for the truth about cicadas the government’s been keeping secret.”

(Cicadaville.com has since been converted into a Japanese website about STDs.)

5. Cicadas were initially documented by a politician: The first time periodical cicadas were documented on American soil (other than by Native American observers) was when William Bradford, second governor of the Plymouth Colony and signer of the Mayflower Compact, described them in 1633:

And the spring before, especially all the month of May, there was a such a quantity of a great sort of flies like for bigness to wasps or bumblebees, which came out of holes in the ground and replenished all the woods, and ate the green things, and made such a constant yelling noise as made all the woods ring of them, and ready to deaf the hearers. They have not by the English been heard or seen before, or since.

6. Cicadas and global warming: In summer 2009, a bunch of “Brood II” cicadas emerged from the soil four years before they were supposed to. One possible explanation? Man-made climate change, of course!

[Prof. Gene] Kritsky said that cicadas count the passage of years by the pattern of fluid flow in tree roots—and that a mild December-January followed by a hard freeze and then another period of warmth affects that flow.

“Our working hypothesis is that the way juvenile cicada nymphs keep time is by the way fluid flows in tree roots. If the timekeeping gets messed up in the first four years, they will come out four years early.”

In the summer of 2011, the health department in Columbia, Missouri, kept the local Sparky’s Homemade Ice Cream from selling a popular ice cream laced with cicada because, according to the department manager of environmental health, it was “not really regulated” and the proprietor “didn’t really have a plan for how he would cook them.” The cicada-flavored dessert included the boiled insects covered with milk chocolate and brown sugar. Here’s a CBS News report on the Sparky’s bug-enriched flavor:

8. CICADAs may one day help America fight ground wars: In January 2012, the US Naval Research Laboratory unveiled new micro-drones called Close in Covert Autonomous Disposable Aircraft (CICADA). The tiny CICADAs, which the naval research lab has been developing since 2006, come equipped with GPS circuits and smartphone-style two-axis gyroscopes. The idea was to create small UAVs that would collect battlefield intel and serve as a communications network for advancing American forces. Check out this photo of a CICADA, courtesy of the Navy: 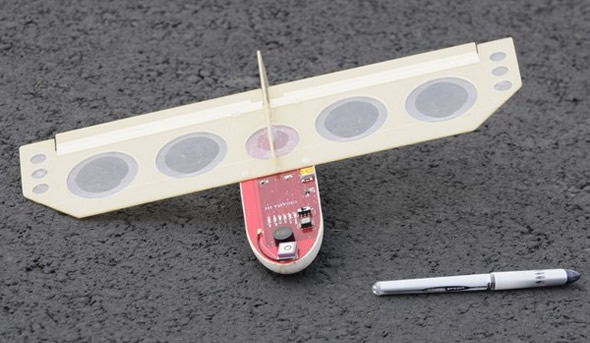