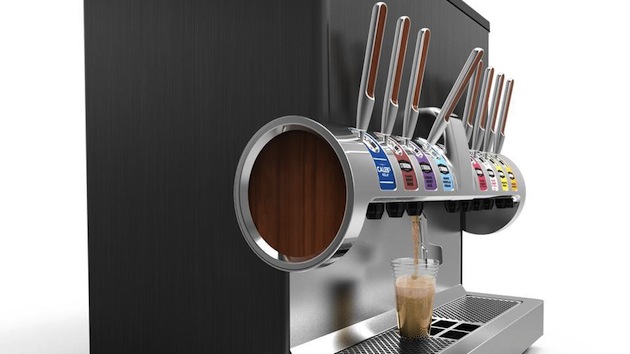 Selling massive volumes of colored, sweetened, fizzed-up tapwater at a fat markup isn’t what it used to be. US soda sales declined for the 10th straight year in 2014. For a while, beverage giants Coca-Cola and PepsiCo could turn to diet soda for relief. But now, the artificially sweetened stuff is losing popularity even faster than regular soda—diet beverage sales are down nearly 20 percent since their 2009 peak and are expected to plunge an additional 5 percent this year.

And just like Big Beer, the soda giants are taking the approach of, “If you can’t beat ’em, buy’ em or imitate ’em.” The incentive is clear. Not only are craft sodas growing in popularity while the overall category shrinks, but the price they fetch in the market is much sweeter. As 12-pack of 12-oz Pepsis sells for as little as $5; Reed’s gets that much for a four-pack of its ginger ale.

PepsiCo recently announced plans for a line of “craft” sodas called Stubborn, in flavors including black cherry with tarragon, orange hibiscus, pineapple cream, and agave vanilla cream, the Associated Press reports. Sweetened with cane sugar instead of high-fructose corn syrup, they’ll initially be served at soda fountains, through a special machine that delivers what the company has called a “tap-like pouring ritual.” (Apparently, convenience-store clerks overseeing these contraptions will have to supply their own hipster mustaches.)

The imminent Stubborn launch (the date hasn’t been announced) isn’t Pepsi’s first dip of the toe into the burgeoning alt-soda market. Earlier this year, it launched Mountain Dewshine, a clear, sugar-sweetened version of the creepy-green, corn syrup- and caffeine-laden beverage. Employing a clumsy backwoods marketing scheme likening the soft drink to illicit moonshine, PepsiCo underlines the “craft” nature of Dewshine by making it available only in glass bottles. Last year, the company rolled out Caleb’s Kola, a “blend of sustainable Fair Trade cane sugar, kola nuts from Africa, a special blend of spices from around the world, and a hint of citrus.” (“‘Caleb’ is Caleb Bradham, who in the 1890s developed the recipe for Pepsi,” Bloomberg reports.)

A 12-oz serving of Mountain Dewshine delivers 42 grams of sugar—roughly equal to the sugar content of regular Mountain Dew (46 grams).

Rival Coca-Cola has is also testing the crafty waters. In June, the company snapped up the Hansen’s and Blue Sky “natural soda” brands—apparently, the first move made by its new Craft Beverages unit, which Coca-Cola formed back in March, the Wall Street Journal reports. The company has yet to launch a homegrown craft line, but given that it saw fit to devote an entire unit to the concept, it’s a fair bet that we’ll be hearing about a craft Coke project soon.

The question is, will donning the “artisanal” halo be enough to revive Big Soda’s flagging fortunes?

As my colleague Maddie Oatman reported back in March, the World Health Organization recommends that people consume no more than 25 grams (about six teaspoons) of added sugar per day. A 12-oz serving of Mountain Dewshine delivers 42 grams of sugar—roughly equal to the sugar content of regular Mountain Dew (46 grams). The Big Soda business model thrived when people didn’t think twice about swilling down several Mountain Dews per day. Consumers who are now shying away from Mountain Dew because of its sugar content aren’t likely to revert to their old habit just because Dewshine comes in glass bottles (and is pricier, to boot).

A recent piece in Food Dive summed up the problem:

People like soda. They’re just not drinking soda as much as they used to because it’s not part of their diet anymore,” said Jonathan Texeira, co-owner of beverage distributor Refreshments Direct and the Batch Craft Soda brand. “Occasionally, they’re gonna want a root beer, say, once or twice a week, and when they do, they would like to have a really good root beer.”

There are two problems for Big Soda in that last sentence. The first is that when people want a “really good root beer,” why would they turn to Coke or Pepsi, best known for mass-produced swill, when so many small, regional soda makers are popping up? The second is the “once or twice a week” bit. The entire Big Soda business model—its vast factories, its freight fleets, its distribution deals with retailers like Walmart—is predicated on churning out and selling vast amounts of cheap product to a public that sees soda as a daily staple, not a treat. I predict craft soda will remain a niche market—one not likely to bring the fizz back to Pepsi and Coke sales.