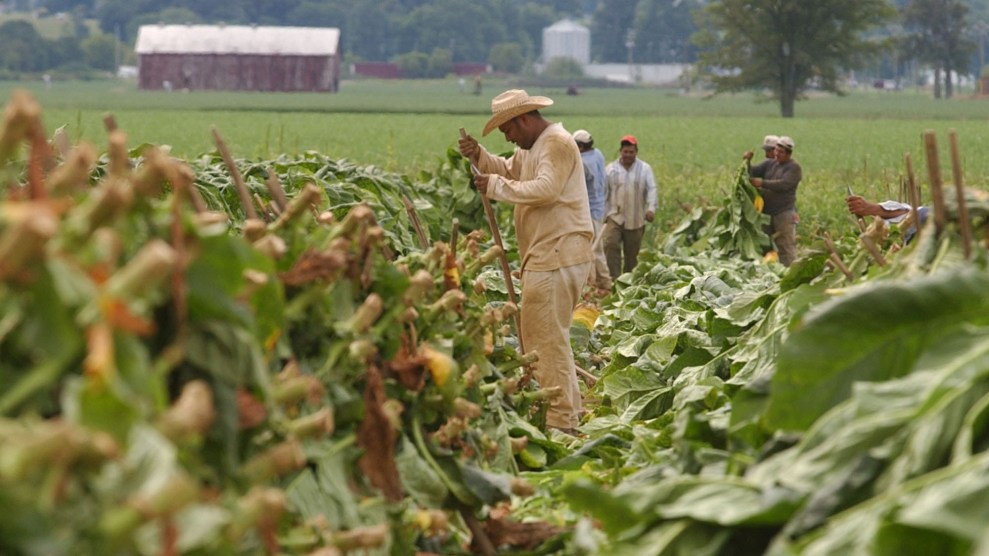 Update (10/3/2020): On Nov. 2, on the eve of the national election, the US Department of Labor made a rule change that will spare H-2A farm workers from the wage cuts discussed below, but will severely limit the pay raises they receive going forward. The move will make the Agricultural Labor Survey irrelevant to setting wages for the more than 200,000people who work on US farms under temporary H-2A immigrant visas. Under the new rule, the DOL will freeze wages for H-2A workers at 2020 levels for two years, and then adjust them starting in 2023 based on a measure called the BLS Employment Cost Index (ECI). In recent years, the now-irrelevant Agricultural Labor Survey has resulted in wage gains for H-2A workers that are “much higher” than the ECI’s, the notice states. The ECI’s lower rate of increase—and thus slower wage growth—will result in a $170.68 million annual “transfer” from farm workers to growers over the next ten years—or about $1.68 billion total over the next decade—representing money saved by growers and lost by farm workers. “The actual loss in wages to farmworkers is probably much larger than DOL’s estimate of $178 million per year, because it underestimates the number of workers affected,” the advocacy group Farmworker Justice wrote in a an emailed statement. “DOL assumed only a 6.2% increase in the number of H-2A workers requested and approved per year, when the rate of annual increase has been hovering around 15% per year. More importantly, DOL only includes potential wage loss for H-2A temporary foreign workers, not for the thousands of U.S. workers who work at H-2A employers along with guestworkers.”

While the DOL actively seeks to limit H-2A worker wages, the agency has taken a laissez-faire approach to protecting them, and other workers, from the coronavirus.

For all of its virulent xenophobia, the Trump administration does seem to cherish one form of immigration: the federal visa program for guest farmworkers, known as H-2A. Under Trump, the number of foreign nationals receiving H-2A visas has surged from 134,368 in 2016 to 204,801 in 2019. One reason for this H-2A exceptionalism may be that the program has long been notoriously geared to serve the interests of farmers over the workers themselves. While in the program, at the mercy of their employers, some workers have been subjected to abuses like wage theft and substandard housing.

And now, even as farms grow ever more-reliant on the program for labor, and even as the coronavirus pandemic makes farm work even more dangerous than it already was, Trump may have found a way to make it more farmer-friendly and anti-worker still: by slashing wages. The US Department of Agriculture recently executed a bureaucratic maneuver that could do just that, says Evy Peña, communications and development director for the Mexico-based Centro de los Derechos del Migrante (Center for Immigrant Rights).

The H-2A program has long been notoriously geared to serve the interests of farmers over the workers themselves.

Understanding how requires some background. Guest-worker wages vary by state, through a mechanism that prevents farmers from paying them less than the prevailing rate in the surrounding area, which would undermine bargaining power for other nearby workers. This “adverse effect wage rate,” calculated for each state by the US Department of Labor, ranges from $11.71 per hour in Florida, Alabama, and Georgia, to around $15 on the west coast. To calculate the rate, the labor department relies on the Agricultural Labor Survey, a twice-a-year polling of farmers conducted by the USDA.

The Department of Labor has not responded to a query about whether the USDA’s move will do away with the higher rates. Its secretary, Eugene Scalia (son of the late Supreme Court justice Antonin Scalia), is a former “management side” labor lawyer with a history of pushing the interests of big business over those of low-wage workers.

And slashing wages for H-2A workers has been an explicit goal of USDA secretary Sonny Perdue’s, a former governor of Georgia with extensive agribusiness ties, for nearly a year. Back in January, he told attendees at an agribusiness conference that “we have to do something” to cut the program’s above-minimum wages. In April, NPR’s Franco Ordoñez reported that Perdue was working with White House allies to “see how to reduce wage rates for foreign guest workers on American farms,” using reduced farm sales because of the pandemic as an excuse.

For workers in many states, the pay cut would be substantial. In Perdue’s home state of Georgia, with its labor-intensive $14 billion agriculture industry, the current hourly rate for H-2A workers stands at $11.71, while the minimum wages stands at $7.25. A move from the adverse effect wage rate to the minimum rate would amount to a 38 pay percent cut. In neighboring Florida, which also boasts a large, labor-intensive farm economy, the pay cut for H2-A workers would amount to 26 percent.

“This pay cut would only increase the risk of exploitation for an already vulnerable population.”

Then there’s Iowa, home state of USDA under secretary for farm production and conservation Bill Northey, who signed the decree canceling the Agricultural Labor Survey. In that state, the adverse effect wage rate for H-2A workers stands at $14.58 while the minimum wage stands at $7.25. That’s would be a more than 50 percent pay cut. Before joining the Trump administration, Northey served as the secretary of Iowa’s agriculture department.

The cuts, if they’re realized, come at a time when the workers who feed the United States operate under severe stress from the threat of COVID-19.” The wages of workers who are putting their lives at risk while feeding the country are far too low already,” Peña said. “This pay cut would only increase the risk of exploitation for an already vulnerable population.”