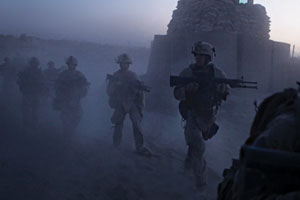 Now that the bad war in Iraq is over, all we’ve got left is our good one in Afghanistan. Last week, the center-left Afghanistan Study Group (ASG) officially released its “New Way Forward” report. “Prosecuting the war in Afghanistan is no longer essential for U.S. security interests,” it announces up front. ASG’s report offers some basic principles around which to build a viable “Plan B,” a strategy that accepts that victory over insurgents isn’t essential to preserving America’s national security interests. Its key recommendations include promoting political inclusion, downsizing the US military footprint, focusing security efforts on Al Qaeda, promoting economic development, and engaging regional stakeholders.

Considering the wealth of expertise on ASG’s roster—which includes regional security expert Paul Pillar, economist James K. Galbraith, and group chair Steve Clemons—you’d expect to see hard-thought-out ideas, elaborate arguments, and inspired insight. Not so much, it turns out. Instead, the report is chock-full of vague recommendations and dated, sometimes curiously optimistic thinking.

“Protecting our interests does not require a U.S. military victory over the Taliban,” it reads. It dismisses the group as a Pashtun insurgency that feeds on feelings of disenfranchisement among rural Pashtuns, whose rise in the 1990s “was due to an unusual set of circumstances that no longer exist and are unlikely to be repeated.” [emphasis added] “Non-Pashtun Afghans now have ample experience with Taliban rule,” the report says, “and they are bound to resist any Taliban efforts to regain control in Kabul.” All this, just as David Petraeus admits that the Taliban’s footprint is spreading.

The report doesn’t explore the”unusual set of circumstances” it mentions, and fails to note the open and ugly disagreement between Afghan President Hamid Karzai and western diplomats on the question of reconciliation with the Taliban. It also doesn’t address the Taliban’s complex relationship with regional players like the Pakistani intelligence service. Over at The Nation, Richard Dreyfuss writes that:

What the ASG woefully ignores, understates, or dismisses, however, is the fact that the Taliban is not merely a rural insurgency but a lethally organized force supported by Pakistan and its intelligence service, the ISI. The war in Afghanistan is, indeed, a civil war, but one in which one side is vigorously supported by Pakistan and the other side, largely represented by the former Northern Alliance and powerful segments of the Afghan government and parliament, is backed by India, Iran, and Russia. The ASG notes, in passing, the Pakistan ISI involvement, but it doesn’t give it the prominence it deserves, especially since it is Pakistan that has the ability to bring most, if not all, of the Taliban to the bargaining table. [emphasis added]

That bolded text emphasizes the biggest frustration with a report like this: it masters the fine art of saying a lot while saying nothing at all.

One of President Obama’s central justifications for fighting the war in Afghanistan was to prevent it from re-emerging as a safe haven for Al Qaeda. Never fear, the report says. Given the organization’s reduced visibility and activity in Afghanistan, ASG argues, a drawdown wouldn’t make the group “substantially more lethal.” And if the Taliban were to regain some measure of control “it would not likely invite Al Qaeda to re-establish a significant presence there.” But a recent Al Jazeera report from northern Afghanistan shows that Al Qaeda is ready and waiting to bolster its support of the Taliban:

In the ASG’s report, you won’t find any mention of limiting corruption, or of Karzai’s growing resistance to the American-style strategy to root it out in his government. Nor will you get a sense of how the United States could go about engaging regional actors as diverse as China, Pakistan, India, and Saudi Arabia.

Despite all its tantalizing vagueness, the report does highlight what the Obama administration and pro-COINers tend to ignore: that a way out can, in fact, be a way forward. But if the experts behind the report are going to have any serious impact on the discussion, they have to decide how to bridge the reality of the war with our aspirations for what the good war is supposed to be.