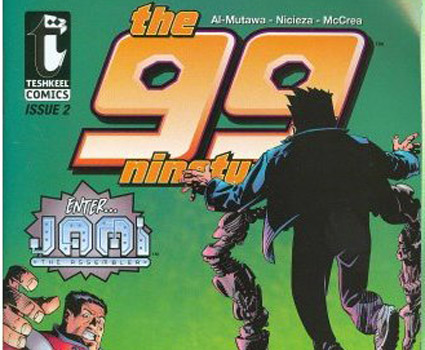 Five years ago, comic book series “The 99” became a sensation in the Middle East, winning over magazine writers, think-tank wonks, and a generation of kids who have become obsessed with the comics. Even President Obama has praised it for capturing “the imagination of so many young people, with superheroes who embody the teachings and tolerance of Islam.”

Created by clinical psychologist Dr. Naif al-Mutawa, a Kuwaiti American who sought to create positive role models for kids in the Arab world and beyond, the series features 99 superheroes, each representing one of the 99 concepts of God as depicted in Islam—although religion is not explicitly referenced. After coming up with the concept, he raised more than $7 million to fund his project, and then hired the former artists and creators of famous American comic books to make it a reality. Last year, the family friendly Hub TV channel agreed to air the animated version of “The 99” in the United States.

Unfortunately for Mutawa, anti-Islam activists like Pamela Geller made it their mission to keep “The 99” off the air. “These Islamic butt-kickers are ready to bring truth, justice and indoctrination to impressionable Western minds,” Geller wrote in one blog post. New York Post columnist Andrea Payser also wrote a column attacking the show: “Coming soon to a TV in your child’s bedroom is a posse of righteous, Sharia-compliant Muslim superheroes.”

The damage was done. The Hub delayed the air date indefinitely, disappointing Mutawa. “Unfortunately, corporate America gets scared when people start attacking,” he told me.

It’s true that when faced with a choice between a bully and a show that challenges conservative “values,” corporate America often sides with the bully. “How cliché,” Mutawa says, “that the characters who were designed to create tolerance and multiculturalism are the ones attacked by the bigots.”

The journey of “The 99” from its birth in the Middle East to the attempts to bring the show to America is the subject of Wham! Bam! Islam!, a documentary by flimmaker Isaac Solotaroff that will air tonight on PBS. Mutawa hopes that Solotaroff’s doc will help help counter the conservative campaign against his program. “They shut a door. We opened a window. The PBS documentary coming out will let America know what happened with ‘The 99′” he says. “The irony is, even though America bought the show a year before the Saudis did, it’s going to show up on Saudi TV first. It kind of puts extremism in perspective.”

Also read our interview with graphic novelist Craig Thompson, whose new book, Habibi, explores stories of the Bible and the Koran.