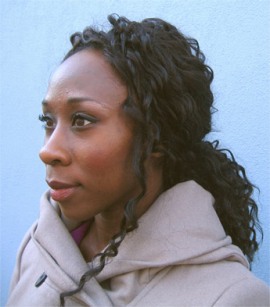 Esi EdugyanIn 2011 Esi Edugyan’s bestelling novel Half Blood Blues snagged Canada’s highest literary honor, was a finalist for Britain’s Man Booker Prize, and was translated into nine languages. A Canadian with roots in Ghana, 34-year-old Edugyan’s novel explores the overlooked histories of Africans and mixed-race foreigners through the travails of a popular jazz band trapped in Nazi-era Europe. With a light touch and a deft hand, she provides original insight on the black American experience. So it’s a shame the novel is only now being released in the US, by Picador on February 28th.

The story opens as the Hot-Time Swingers, whose members include African-Americans, a Jew and a German with African ancestry, cut a record in occupied Paris. Their sound will become legend, but in Nazi Europe jazz is the degenerate music of half-breeds, or mischlings. When the band’s frontman, the young trumpeter Hieronymus Falk, nicknamed Hiero, rashly decides to venture outside for a glass of milk, he is arrested.

A shy 19-year-old, Hiero is the locus of his band’s hopes and an undisputed genius. In one scene Louis Armstrong gifts the boy with his trumpet. But as one of Germany’s ‘Rhineland Bastards,’ (the offspring of German women and French-Senegalese colonial soldiers posted in the Rhineland following WWI), Hiero is a mischling of the first order and a refugee of sorts: considered stateless in Germany and a despised German in Paris, he’s a young man in limbo, an easy target. When Hiero is banished to a concentration camp and presumed dead, what remains of the band disintegrates.

The virtuosity of Edugyan’s writing is noticeable in how Hiero, who serves as a projection screen for the motivations of others, is himself barely sketched. The narrator is Sid Griffiths, a jealous bassist whose talents at rendering the sounds of jazz into words, in a brassy, thumping patois, overshadows his musical abilities.

Fifty years later, Sid is a retired medical transcriber in Baltimore with a secret: he committed a betrayal that sent Hiero to the camps. When his old bandmate Chip turns up, he informs Sid that Hiero is alive. As they set out to find him, the story moves between the dawn of a reunified Europe and Sid’s flashbacks from the early days of the war. The old man’s shame is slowly exhumed—along with the complex implications of the band members’ skin colors, nationalities and ethnicities in hostile territory.

And yet Edugyan avoids the familiar tropes of Nazi thuggery. Rather than dwelling on their well-documented rape and mayhem proclivities, she reveals how the Red-Hot Swingers transform the Nazi Party anthem into protest music.

The novel’s surprising end, and Edugyan herself, are proof that the mischling experience beautifies art in all of its forms.