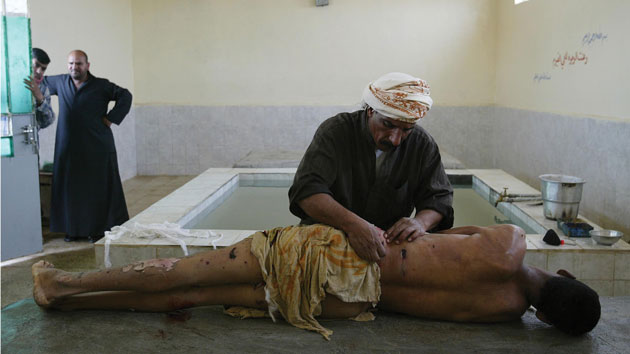 A professional body washer prepares a bombing victim for Muslim burial in Najaf, Iraq. This photo ran on the front page of the New York Times on March 4, 2004. Joao Silva/The New York Times/Redux

His enthrallment eventually turned to bafflement and revulsion. Seeking to better understand his reaction to the images, Shields set about the task of analyzing all of the war photos that have appeared on the front page of the New York Times over more than a decade, from the invasion of Afghanistan in 2001 to the middle of 2014. “In the thousand combat photos that I studied, I found virtually nothing of the smell and heat, and above all the reality—the death, the human blood—of war,” he says.

The “governing ethos” of the Times was “unmistakably one that glamorized war and the sacrifices made in the service of war,” Shields writes in War Is Beautiful: The New York Times Pictorial Guide to the Glamour of Armed Conflict, a new coffee-table book that showcases the paper of record’s front-page war photography along with Shields’ diatribe against it. Shields chose 64 images for War Is Beautiful, a collection that is, as he puts it, “the most powerful representation of my case and indeed representative.” But if Shields’ goal is to convince readers that the Times is merely running “military recruitment posters” and is pushing a war-is-good narrative, the book leaves much to be desired.

Shields separates his selected photos into 10 aesthetic mandates, or tropes, he believes the Times imposes upon itself: Nature, Playground, Father, God, Pietà, Painting, Movie, Beauty, Love, and Death. In the Father photos, which Shields’ views as depictions of soldiers portrayed as benevolent caretakers, a Marine medic cradles a young girl whose mother was killed by crossfire in Iraq. In the Love images, where war and soldiering are understood as “unmistakably erotic,” three Marines chat with the entertainer known as the Naked Cowgirl in Times Square. Among the photos that fall under the Nature banner, “the preserve of masculine desire for war,” Army Specialist Robert Soto runs for cover in Afghanistan’s Korengal Valley as Taliban fighters ambush his platoon. 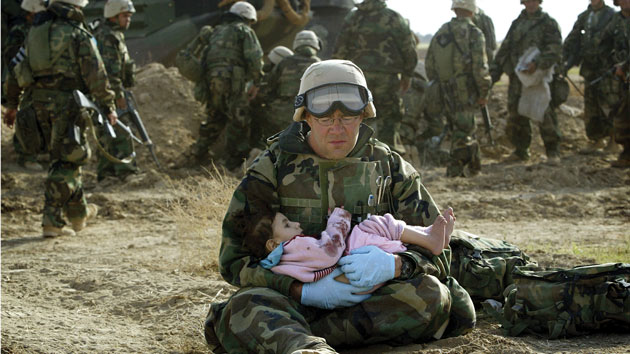 A Marine doctor holds a girl after her mother was killed by crossfire on the front line near Rifa, Iraq. This photo ran on the front page of the New York Times on March 30, 2003. Damir Sagolj/Reuters

The 10 tropes he outlines are broad enough to fit any topic, and many of the photos within his selection would be at home in any of them. For example, three of the five pictures that make up the “Pietà” chapter, which selects photos with perceived religious implications, are of the dead.

Shields’ argument hinges on the concept that these photos are too beautiful—in both presentation and content—to be honest depictions of war. He claims that the Times’ images of war are more at home in the “painterly tradition” and the art world than in journalism. “The photo editors and the photographers are over-invested in surface compositional beauty and under-invested in actually portraying the hell of war,” he tells me. “They prettify, beautify, glamorize war.”

Even if they are more honest, unsparingly violent war photos don’t always push people to action or understanding.

Of the 1,000 front-page photos Shields reviewed, 700 of them were “wrongly beautiful,” he says, suggesting that an inherently ugly subject demands ugly images. But his book is vague on what proper war photography should look like: Should the photos be out of focus, with poor framing, or in bad lighting? Shields quotes photojournalist Ashley Gilbertson on how difficult it was to shoot in Iraq—”just a flat, ugly, Middle Eastern country”—and then disparages the Times‘ photo editors and photographers for “prettifying” war, glossing over the hard truths of it. And yet Gilbertson’s own acclaimed images are well-composed and aesthetically pleasing.

Within Shields’ selection of images, there is evidence of what he calls “the reality—the death, the human blood—of war.” As he writes in his introduction, “The Times uses its front-page war photographs to convey that a chaotic world is ultimately under control.” But where is the control in the image of the helpless medic who can do nothing to bring back a girl’s mother? Or in the 2007 photo of a terrified boy in Baghdad peering into a car splashed with blood? Or the shot of a barefoot woman fleeing the the aftermath of a triple car bombing in Baghdad? In drawing attention to a 2004 image of a screaming Palestinian man carrying a lifeless child whose face is streaked with blood, Shields snipes, “Congratulations, you chose one image that looks slightly realistic.”

Yet notably absent in Shields’ selection are A1 images like Massoud Houssaini’s Pulitzer Prize-winning “Girl In Green”, which shows a girl with her mouth open in a scream, arms stretched down with open palms, surrounded by dead and wounded children after a suicide bomb ripped through a religious celebration at a holy shrine in Kabul in December 2011. 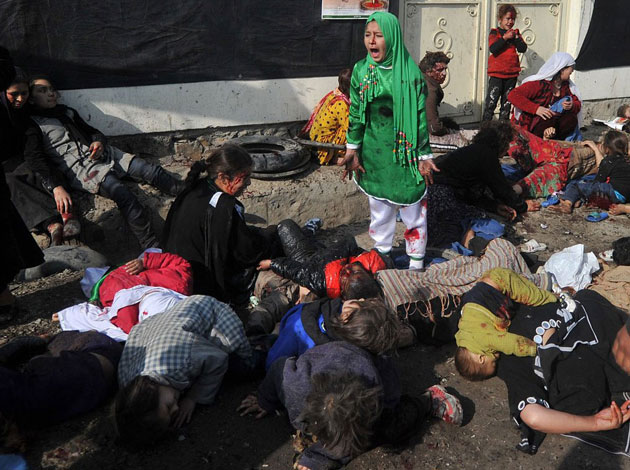 The aftermath of a suicide bombing at a religious ceremony in Kabul. This photo ran on the front page of the New York Times on December 7, 2011. Massoud Houssaini/Agence France-Press

For Shields, a more honest portrayal of war would include more blood, more terror. But war is not only body parts and savagery. It’s also the things his selection highlights, those things that seem too clean for war: A tidy, flower-adorned grave at Arlington National Cemetery visited by a newly-single mother. The camaraderie and bravery of troops who cover a wounded man until he can be brought to safety. The lightness of soldiers playing baseball at a Forward Operating Base in Iraq. These are no less war photographs simply because they do not show life-and-death moments. An accurate version of the totality of war has to show its many facets.

An accurate version of the totality of war has to show its many facets.

Even if they are more honest, unsparingly violent war photos don’t always push people to action or even understanding. Photos of young children ripped apart by bombs in Syria have circulated for years. And yet that tragedy didn’t strike many Americans and Europeans in any meaningful way until the viral spread of a photo of a three-year-old boy, Aylan Kurdi, who washed up face down on the shores of Greece with his tiny shoes still on. The photo is distressing, but not gruesome. And it succeeded where much bloodier images failed to wake people up to the humanitarian crisis caused by a four-and-a-half-year-old war that’s killed more than 240,000 people, internally displaced 6.5 million, and has turned another 9 million into refugees.

War is Beautiful does highlight some important dilemmas that face all media outlets that cover war: How far should newsrooms go to show the gruesome reality of armed conflict? Where is the line between sparking interest or concern and triggering horror and revulsion? When does photojournalism become propaganda? And what is the overall goal of depicting war? These are questions that have accompanied nearly every war that has ever been photographed.

So why is it that the public won’t engage in the visceral tragedy of war unless it’s packaged nicely? In choosing what to publish, editors’ decisions often hang less on a conscious narrative and more on what they think their publication’s readers will be able to stomach. Should readers be demanding gorier images from the media? “I think the book fails if it only is a finger-waving exercise at the Times,” says Shields. “I do mean to implicate all of us, including myself.”

The images that populate War Is Beautiful are undeniably beautiful. Whether or not they’re accurate portrayals of war is up to you. 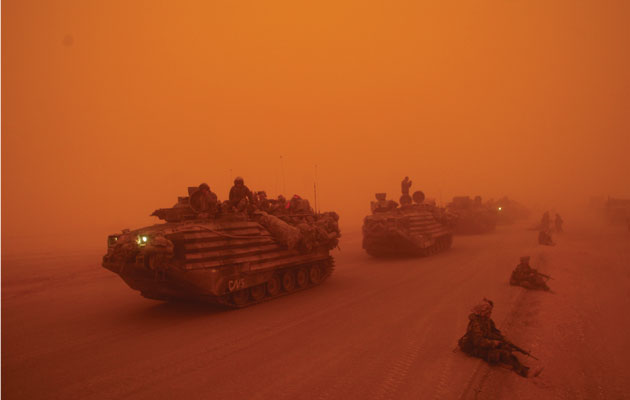 A convoy from the First Marine Division caught in a sand storm in Iraq. This photo ran on the front page of the New York Times on March 26, 2003. Ozier Muhammad/The New York Times/Redux 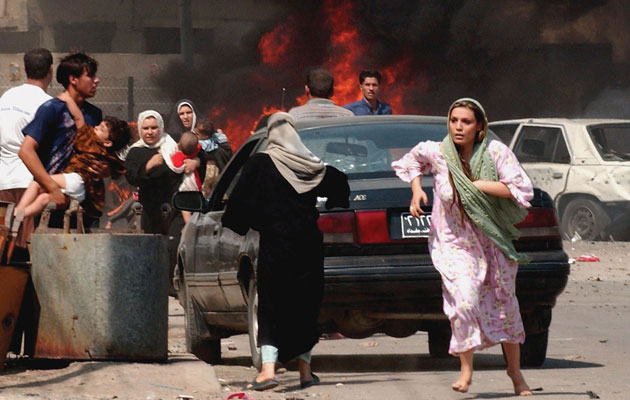 People flee after three explosions rock the streets of Baghdad. This photo ran on the front page of the New York Times on October 1, 2004. Wathiq Khuzaie/Getty Images 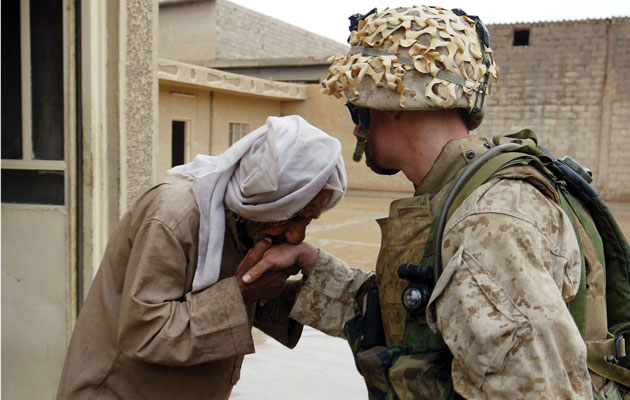 An Iraqi thanks Marine Cpl. Joseph Sharp after a delivery of food and water to civilians in Fallujah, Iraq. This photo ran on the front page of the New York Times on April 20, 2004. John Moore/Associated Press 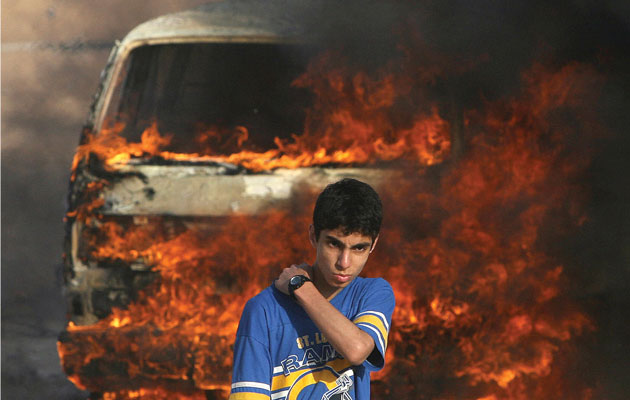 A Palestinian boy stands near the site of clashes between Hamas and Fatah in Gaza City. This photo ran on the front page of the New York Times on May 15, 2007. Mohammed Abed/Agence France-Presse/Getty Images