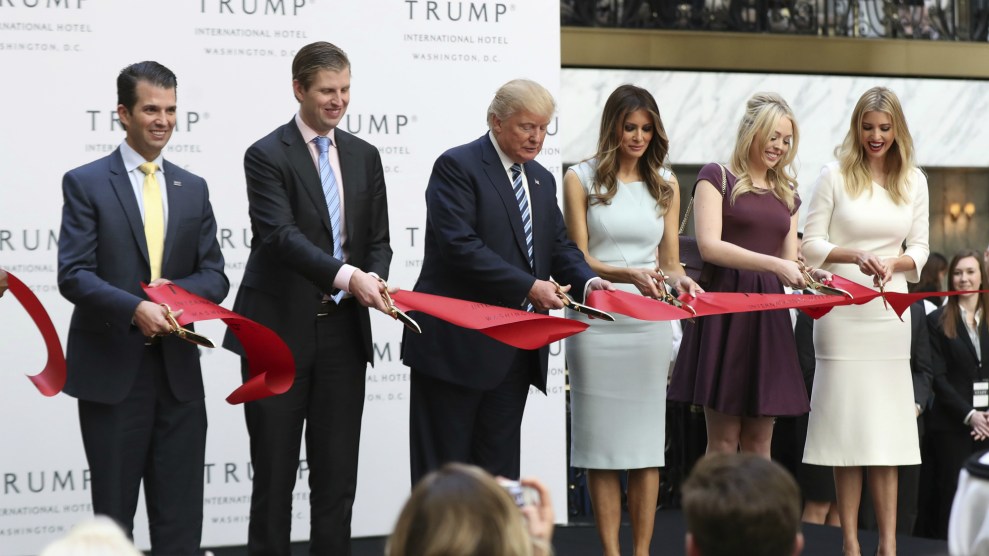 Donald Trump will enter the White House with a problem no president has had: His sprawling international business empire poses the potential for conflicts of interest on an unprecedented scale. He owes large amounts of money to foreign banks, including those in Germany and China—a possible point of leverage on a commander in chief. His family-run company does deals with foreign investors and groups with political ties and interests that could run contrary to US national security concerns. With his new Washington, DC, hotel in a federally owned government building, the Trump Organization could have to negotiate with the Trump administration.

There still remains so much publicly unknown about his wide-ranging business operations that all the potential conflicts of interest cannot be identified. Presidents must file a relatively undetailed personal financial disclosure, but no law compels a president to be fully transparent about his finances (Trump can keep hiding his tax returns) or to divest himself from his financial interests. Conflict-of-interest rules that cover federal employees do not apply to the president. Most presidents do take steps to distance themselves from their assets, but Trump has not yet detailed his plan for doing so. And in his case, his vast holdings could pose a serious constitutional problem.

Richard Painter, an attorney who served as George W. Bush’s chief White House ethics lawyer, thinks Trump could run into trouble with Article One, Section 9 of the Constitution—the emoluments clause. The clause prohibits anyone in federal office from holding a title of nobility granted by a foreign king and from accepting gifts from foreign governments. In the years before the Constitution was drafted, it was common for European monarchs to lavish gifts on ambassadors and other foreign government officials. Several early American diplomats received bejeweled trinkets and fancy horses from European nobles. The emoluments clause was designed to prevent officials from pocketing gifts that might influence them, and it requires congressional approval for senior federal office holders to accept gifts from foreign governments. And, Painter says, the clause can be interpreted as a prohibition on a government official benefiting financially from a relationship with a foreign government. And Trump appears to have just that. An investigation by the New York Times found that the president-elect holds a 30 percent stake in a partnership that borrowed $950 million from four lenders, including the Bank of China, which is owned by the Chinese government.

The emoluments clause has never been litigated, at least relating to a president. But questions regarding its application were raised in September—in connection with Hillary Clinton. Erik Jensen, a law professor emeritus at Case Western Reserve, was among the legal scholars who argued that the Clinton Foundation’s acceptance of gifts from foreign governments, when Clinton was secretary of state, may have violated the emoluments clause. He agrees with Painter that Trump’s holdings are problematic. Jensen says he would advise Trump to dump any asset or liability that is connected to a foreign power. “The underlying concern is divided loyalties, and I think a reasonable governmental officer would stay as far away from the fuzzy areas (or uncharted waters—pick your metaphor) as possible,” Jensen says.

Painter predicts that if the Democrats were to gain control of any house of Congress during Trump’s administration, they could cite the emoluments clause as the basis to mount a potentially embarrassing investigation into Trump’s opaque finances. “They’ll do the investigating and play the game,” Painter says. “And if there’s even a whiff of an emolument clause violation, it will make Hillary’s emails look like a walk in the park.”

The Trump campaign did not respond to a request for comment, but the Trump’s Organization’s general counsel, Michael Cohen, told CNN on Thursday that Trump’s plan is to place his assets in a “blind trust” that will be managed by his eldest children while he holds office. Trump floated this as a possibility during the campaign. But the plan Trump and his lawyer have described is not really a “blind” trust. A true blind trust is intended to remove conflicts of interest by obscuring a person’s assets. Trump is well aware of his assets—after all, in most cases they are prominently branded with his name. Just handing them over to his kids to oversee will not remove the potential conflicts of interest.

When pressed on Trump’s plan for his business holdings, Cohen said, “Will we be able to appease everybody? The answer is no.” Cohen added. “But everything will be done legally. He’s not interested in the company anymore. He said it yesterday in front of a whole group of people. He’s interested in fixing America.”

Unwinding real estate holdings—which make up the majority of Trump’s assets—can be a long and complicated process. One way to place his financial interests in an actual blind trust, Painter says, would entail moving them into a holding company and then taking that company public. The proceeds from the sale of shares in this new entity would be placed in a trust that was managed for Trump’s benefit—without Trump knowing what assets the trust held. It seems unlikely, however, that Trump would part with his beloved golf courses and hotels. And this course of action would essentially require selling off a business that is managed by his three oldest children, leaving them out in the cold (but still presumably with millions of dollars).

Without taking such measures, Trump will assume office as the most conflicted president in American history. And that may be fine with him. As Painter say, “He’s never been one to worry about appearances.”