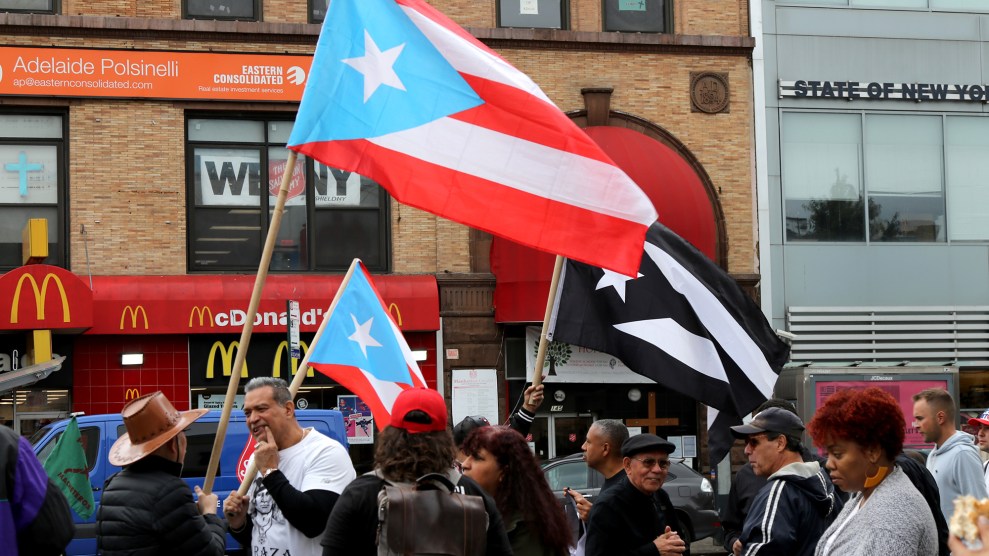 As the partisan bias of the Senate, which favors sparsely populated states with overwhelmingly white populations, has been more broadly recognized, statehood for the District of Columbia and Puerto Rico has become a rallying cry for Democratic activists. The Democratic-controlled House of Representatives has already approved DC’s effort, voting in favor of the proposal last summer.

On Wednesday, the House Natural Resources Committee will hold a hearing on two major bills that could advance statehood for Puerto Rico. While there are similarities between the two entities’ situations—namely that it is fundamentally wrong to deny people a voice in their government by virtue of where they live, and that racism is an undergirding reason the disenfranchisement persists—the hearings are likely to expose important differences obscured by the United States’ partisan political lens.

Critics of statehood say US colonial injustices “have alienated so many Puerto Ricans from the idea.”

While you’d be hard pressed to find lots of DC residents who don’t want statehood, that isn’t true on either the island or in Puerto Rico’s diaspora. Building a similar consensus would be necessary for any successful push in Congress, says Julio Ricardo Varela, the editorial director of Futuro Media and the founder of Latino Rebels. Instead, he warns that the dueling Congressional bills seem destined to derail each other.

One proposal would offer a binding up or down vote on statehood that, if approved, would force the federal government to make Puerto Rico a state. That bill, introduced by Democrat Rep. Darren Soto (the first Puerto Rican elected to Congress from Florida) is also supported by Jenniffer González, the island’s non-voting representative to Congress and a staunch supporter of former President Donald Trump (who once suggested “selling” Puerto Rico). The other proposal, pushed by New York Democratic Reps. Nydia Velazquez and Alexandria Ocasio-Cortez (who share Puerto Rican heritage) has broader support in Congress. It would create a status convention where representatives elected by Puerto Ricans would study an array of options for the island—which, aside from statehood, include independence or some form of association that would leave Puerto Rico with more autonomy—and put vetted proposals to a binding vote. “The key is that this framework would be developed by Puerto Ricans and for Puerto Ricans, not dictated to them like so many previous policies,” the pair wrote in an op-ed last year.

Both bills would push the federal government to accept a Puerto Rican choice, something that’s never happened in 123 years of US colonial rule. Varela says the supporters of the Soto proposal and the Velazquez/Ocasio-Cortez plan should be working together rather than at cross purposes. In a Washington Post op-ed published just after the Soto bill was introduced, Varela called the plan “another recycled, empty attempt” because so-called institutional statehood supporters—people like Soto and González who seek statehood by working within the traditional US/Puerto Rico relationship—are not doing enough to “connect its struggle to the broader fight for racial and social justice.”

Institutional statehood supporters insist that it is clear that statehood is what the majority of Puerto Rican people want, pointing to nonbinding results from the last three times the island’s voters were asked. But those elections’ mandates were complicated by the role they played as a football in the island’s own fractious domestic politics, and, in the case of the first two, widespread boycotting and ballot spoiling. Others note that the most recent one, in November 2020, had only half of registered voters turn out, with barely more than half favoring statehood; the same election saw the pro-statehood governor retained with less than a third of voter support.

The island’s most prominent statehood supporters have many critics, and not just those who favor independence or other status options, but also among the group of statehood supporters who see the Soto plan as too willing to ignore more than 100 years of history that “have alienated so many Puerto Ricans from the idea of statehood,” as Varela has put it. He argues that statehood must be attached to formal recognition and reparations for past atrocities and injustices perpetrated on the island under United States control, which include deadly attacks on labor and pro-independence uprisings; FBI surveillance, longterm imprisonment and torture of independence leaders; and forced sterilization programs.

Decades of repression and violence targeting pro-independence activists, who were largely rooted on the left, created a stigma that lasts to this day. “[Political opponents] have done a really good job delegitimizing independence sympathizers, politically,” Varela says. “It’s not the violent repression of the past, but it’s really easy to scream ‘Venezuela’ and ‘Cuba’ in Puerto Rico and scare people.”

The current status—in place since 1952—gives Puerto Rico only limited local control while leaving final authority with the US Congress. Puerto Ricans are US citizens, but if they live on the island they can’t vote in presidential elections and have no representation in Congress beyond the non-voting delegate position held by González. (If Puerto Rico were to become a state, aside from two senators, its population would likely garner five members of Congress.) Supreme Court rulings from the early 20th century known as the Insular Cases, which posited that the peoples of Puerto Rico and other territories were “alien races” unable to govern themselves, still shape US relations with Puerto Rico—including the 2016 decision by the Obama administration, in conjunction with Congress, creating an unelected fiscal oversight board to control the island’s finances.

González’s own Republican inclinations strongly suggest that Puerto Rican Senators would not necessarily be Democrats. But Democrats, who emerged from the Trump era more focused on issues of racism and voting rights, have nonetheless broadly come to believe that the island’s situation would be improved by statehood.

“It’s too easy when liberals say, ‘They’re Americans like us.’ That bristles a lot of people,” Varela explains. “I get the intention, but there’s plenty of Puerto Ricans who are like, ‘We’re not American like you.'”