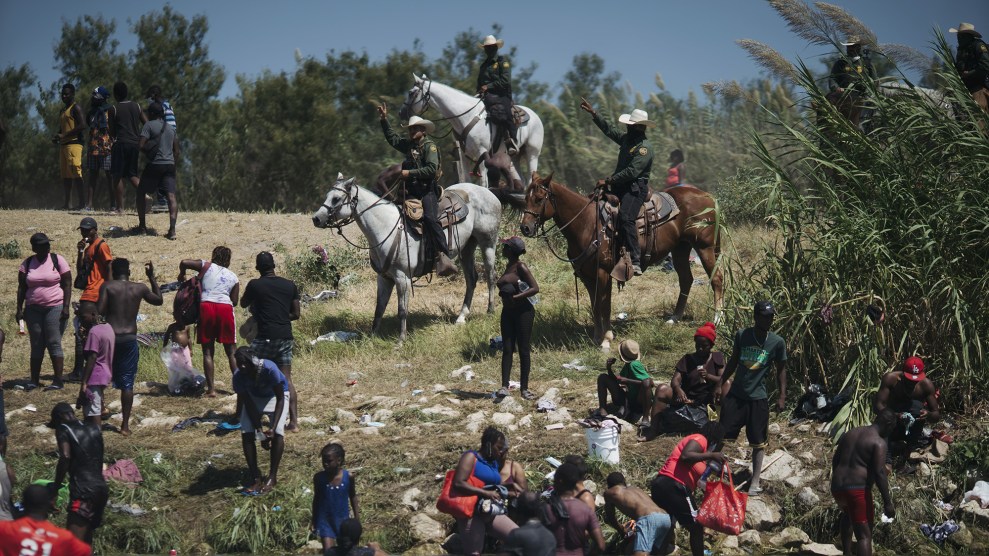 “They’re deporting evidence right in front of our eyes,” Patrice Lawrence told me recently. “We saw 15,000 people under a bridge, and today we see no one. They have expedited the deportation of people who are also eyewitnesses.”

Lawrence, the co-director of the Black immigrants rights group UndocuBlack, was talking about the thousands of Haitian migrants who were met with force by Border Patrol agents on the banks of the Rio Grande last month—more specifically, the people in the now-viral images of agents on horseback using, as the AP described them, “long leather reins in a menacing way” to herd migrants and push them back into Mexico.

After the photos were published, public outcry ensued. “That’s not who the Biden-Harris administration is,” press secretary Jen Psaki told CBS. Vice President Kamala Harris said, “Human beings should never be treated that way,” and Department of Homeland Security Secretary Alejandro Mayorkas called the images “horrifying.” DHS, which oversees Customs and Border Protection, tweeted that it “does not tolerate the abuse of migrants in our custody,” and, notably, that an investigation would be conducted swiftly.

But, weeks later, we’re still left in the dark wondering: Will there be accountability? Will the Biden administration respond differently than previous administrations?

“If they can get that—the uncertainty of a Black person driving a car, if they can understand that fear, I think we bring them along to understand what it must be like to be Black crossing the border.”

Both Democratic and Republican presidents have occupied the White House as Customs and Border Protection agents have committed abuses—and not much has changed. In 2019, a secret Facebook group showed the racist way Border Patrol agents talked about migrants. In 2018, agents sprayed tear gas as Central American families approached the border. That same year there was leaked audio of an agent making fun of migrant children who had been separated from their parents, as they cried out for their mami. In 2017, Customs agents forced a Mexican teen to drink what they knew was liquid meth, which killed him hours later. Also in 2017, an agent ran over a Guatemalan migrant with his Border Patrol truck, shortly after sending racist text messages about migrants. In 2014, another agent sexually and physically assaulted migrant teens after they crossed the Rio Grande. In 2012, a Border Patrol agent fired his gun through the border fence into Mexico, shooting and killing a Mexican teen. In 2008, Border Patrol agents forced a group of men to eat marijuana and flee into the cold Arizona desert winter without shoes or jackets. These are all horrifying, yes, but they are also just a few examples of the bad behavior that continues unabated.

“Historically, the bar has been extremely low for Border Patrol, which is remarkable because it is the largest law enforcement agency in the United States,” explained Shaw Drake, staff attorney and policy council for the ACLU of Texas. “It is supremely behind on any basic accountability measures.”

To this end, I keep thinking about a column my colleague Nathalie Baptiste recently wrote: “Rounding up Haitians and denying them their legal right to seek refuge on US soil is exactly who America is—and has been for decades.”

Lawrence echoed this sentiment in our interview. For her, the images from Del Rio, Texas, confirm what organizations like hers have been saying for a long time: “The people who experienced the brunt of the force of anti-Blackness are Black immigrants and Brown immigrants, are folks who are poor, folks who present as Black regardless of whether or not they’re poor. We are the ones who have troubles and always have.” This population, she said, experiences many layers of vulnerability. “Some of your readers have understood the issue of being Black in America, so if they can get that, the uncertainty of a Black person driving a car, or a Black man driving a car, if they can understand that fear, I think we bring them along to understand what it must be like to be Black crossing the border.”

As a result, Lawrence said—like Black and Brown immigrants rights groups have argued before—what enables abuse at the hands of border officials is less about immigration status and the rule of law, and more about race. “You stand out, you speak another language, and these people already hate you,” she said. “They hate your cousins who are Black, right? Because it’s the same boat, different stuff—African American or native-born or otherwise.” She points to what Donald Trump said during his presidency, “when he talked about having more nice people from Norway—he is not the only one who said so, he’s just saying the quiet part out loud,” she said. “White immigrants are treated better than Black immigrants, better than Black people overall. They do not face the same abuse, either physical abuse or abuse by way of policy. No one is building a new wall or a new fence with Canada or seeking or trying to deport Canadians.”

“You stand out, you speak another language, and these people already hate you.”

While over the years there have been lawsuits against border officials, and some agents have faced various degrees of legal consequences, there has been little done to reform the agency at large. Just as with policing in America, the problem goes beyond a few bad apples or a few agents left over from the Trump era. “This is not going to go away with more training,” Lawrence said. “This is not going to go away with more investigation and best practices. This only goes away if we replace them.” CBP agents, she added, are “equipped for war—they’re not equipped to offer care and compassion.” Given that US Customs and Border Protection, which oversees both Border Patrol and Customs agents, is the largest law enforcement agency in the United States, with a budget of more than $16 billion, Lawrence would like to see accountability start by withholding some of its funds until there is an agency overhaul.

Short of that, there’s little to expect in the way of justice. DHS’s current accountability system, Drake explained, is a “mosaic hodgepodge of internal accountability bodies” that each play a separate role: Office of Inspector General, Office for Civil Rights and Civil Liberties, and the CBP’s Office of Professional Responsibility. But “none of them on their own amount to actual accountability, and when complaints come in they often get batted around between those agencies,” he said.

OIG reports are arguably the most powerful tool to keep DHS in line, since they are what often make it to the public via news reports. For example, as I’ve reported in the past, these investigations have shown terrible conditions in detention at the hands of Border Patrol agents. The civil rights reports, though, are not made public, and while they can include recommendations, there’s nothing that binds the agency to follow those recommendations, making it “extremely weak in that sense,” Drake said. And the Office of Professional Responsibility looks into misconduct by individual agents and sends recommendations to CBP leadership; it’s then up to the CBP chain of command to decide whether to discipline the agent.

To get a sense of how often agents act with impunity, consider a 2017 report by the American Immigration Council. It looked at more than 2,000 cases of alleged misconduct by Border Patrol agents from January 2012 to October 2015  and found that 96 percent of cases where an outcome was reported resulted in “no action” against the agent. “While excessive physical force is the most severe form of misconduct, it is not the only one. The allegations reviewed in this report range from beatings, sexual assaults, and denial of medical care, to theft of detainees’ personal property, including money and identification documents,” the report said. “Not only do Border Patrol agents commit such abuses with regularity; they are seldom disciplined for doing so.”

Members of UndocuBlack, as well as Haitian Bridge Alliance, an advocacy organization that helps Haitian immigrants, are well aware of this and aren’t waiting for the agency to reform itself. Both organizations were in Del Rio and have filed a complaint with the Office for Civil Rights and Civil Liberties, and the groups are considering bringing a lawsuit. Still, the people they would need to tell their stories, to add to what was captured on camera, are the very same people who have been and are still being put on deportation planes. “They’re deporting the evidence that we would need to prove that they are abusing people, and they know that we can’t just take a picture to court and win,” Lawrence said.

“I don’t think we can expect anything differently until they show us that they are in fact different.”

In an email last week, a DHS spokesperson said only that the investigation into the incidents in Del Rio is ongoing: “The Department is committed to a thorough, independent, and objective process. We are also committed to transparency and will release the results of the investigation once it is complete.” The OIG, meanwhile, did not respond to a request for comment.

So while Biden has promised to treat migrants more humanely and has reversed some egregious Trump policies, he has also kept others and he hasn’t hinted at wanting to reform Border Patrol. Some of this is likely to come up next week at the confirmation hearing for Biden’s pick to lead CBP, Tucson Police Chief Chris Magnus. Drake acknowledges that the Biden administration is much more responsive and open to speaking with immigrant advocacy and legal groups like the ACLU, but he doesn’t think much will actually change, particularly in the investigation of what happened in Del Rio. “I don’t think we can expect anything differently until they show us that they are in fact different,” he said.

To quote Nathalie one last time, “The dehumanizing and illegal treatment of Haitians at the border sends a message that contradicts all of the ideals that the Biden administration supposedly espouses. It’s difficult not to see this as a variation on the old theme of Black lives don’t matter. And when it comes to finding asylum, Haitians should look elsewhere.” All this is to say, promises of a swift investigation don’t really mean much, and justice will most certainly remain out of reach when hundreds of the eyewitnesses and survivors remain 2,000 miles away.