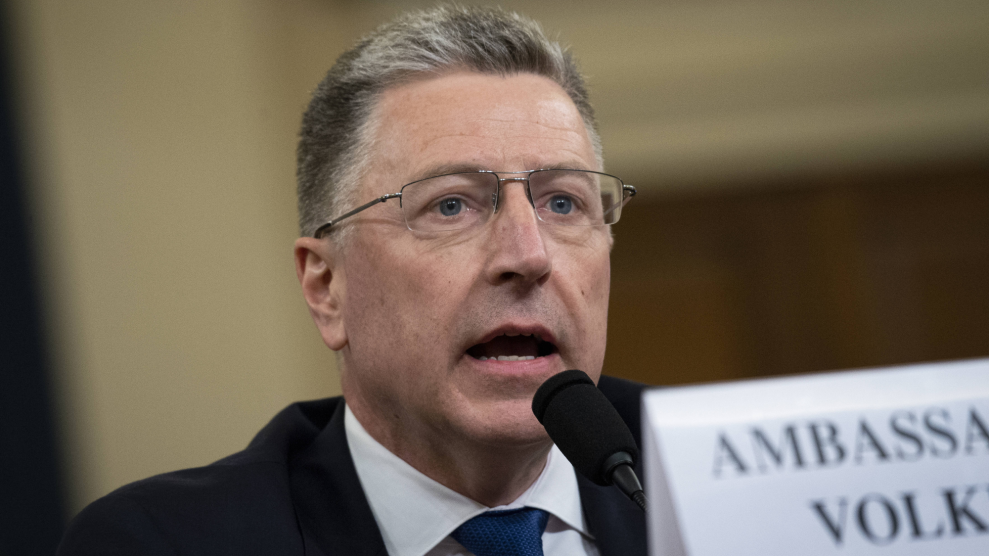 US foreign policy establishment figures are calling for NATO to impose a “limited” no-fly zone over Ukraine. And one of the most vocal advocates downplaying the danger of such a plan is Kurt Volker, a former US ambassador to NATO who happens to have been involved in the 2019 Ukraine scandal that led to Donald Trump’s first impeachment.

President Joe Biden and even usually hawkish members of Congress have rejected this step. That’s because enforcing a no-fly zone would require US or NATO planes to shoot down Russian aircraft, or threaten to, risking a wider war between the US and Russia, including, potentially, nuclear war. In appearances on CBS’s Face the Nation, PBS’s Newshour, and Fox Newsand in widely-cited letter co-signed by 26 other national security figures—Volker has argued the US can limit the risk by informing Russia that the goal of the no-fly zone is to protect civilians. “Russia does not want us in the fight,” he told CBS’s Margaret Brennan last Sunday. “And I think we are letting Putin get inside our heads.”

Volker’s push for Biden to impose a no-fly zone, a step Ukrainian President Volodymyr Zelenskyy has asked NATO to take, is a bit ironic. Volker in 2019 was involved in Trump’s effort to block the delivery of $400 million of US military aid to Ukraine in a bid to pressure Zelenskyy to announce a bogus investigation into Biden. In testimony before a House impeachment committee, Volker made claims that were seized on by Republicans to argue that Trump did not seek an illicit “quid pro quo” with Ukraine. His claims helped Trump evade responsibility for using Ukraine’s national security needs as leverage to get foreign assistance in the 2020 election. And those claims, as I reported last year, were false.

When Trump in 2019 froze aid to Ukraine that Congress had already authorized, Volker was serving as US Special Representative for Ukraine Negotiations. Volker’s main role in the affair was to connect Rudy Giuliani, Trump’s lawyer, who had been scouring Ukraine for dirt on Biden, with a Zelenskyy aide. Giuliani used that access to press for a deal Trump later pushed for with Zelenskyy: Trump would unfreeze the $400 million in military aid if Zelenskyy would announce investigations into Biden and related matters. Giuliani wanted Ukraine to investigate Biden’s calls in 2016 for Ukraine to fire a top Ukrainian prosecutor—specifically, the baseless theory that Biden was trying to stop a probe into a Ukrainian energy company where Hunter Biden once served as a board member. Giuliani also wanted the Ukrainians to look into Trump’s bogus contention that its own citizens had interfered in 2016 to help Hillary Clinton. Trump clearly hoped such an announcement would inflict political harm on Biden, a likely opponent in the 2020 election.

Volker later claimed that he was eager to make sure Ukraine did receive the aid. He said he thought helping the Ukrainians give Trump what he wanted was the way to achieve that goal. But in an October 2019 deposition before House Intelligence Committee and in televised testimony before in November, Volker also repeatedly claimed that he thought Trump and Giuliani were concerned about general corruption in Ukraine but that he had no idea their pressure on Zelenskyy had anything to do with Joe Biden.

That was not true. Biden was a topic of discussion in a lengthy July 2019 call between Giuliani, Volker and Andriy Yermak, a top aide to Zelenskyy, according to audio of the call that CNN reported last year.

“All we need from the President [Zelenskyy] is to say, I’m gonna put an honest prosecutor in charge, he’s gonna investigate and dig up the evidence, that presently exists and is there any other evidence about involvement of the 2016 election, and then the Biden thing has to be run out,” Giuliani said during that call. Giuliani also told Yermak that he was eager for Ukraine to look into whether the former Ukrainian prosecutor “was fired because Vice President Biden threatened” to block a US loan guarantee Ukraine needed.

In his October 3 deposition, Volker mentioned this call but claimed it was “just an introductory” conversation. “It was literally, you know, ‘let me introduce, you know, Mr. Giuliani; let me introduce Mr. Yermak. I wanted to put you in touch.’” Volker said. “Blah, blah, blah.” In fact, the call lasted 40 minutes and included extensive discussion of what Giuliani wanted Zelenskyy to do.

When I reported on this last year, House Intelligence Committee Chairman Adam Schiff, who managed Democrats’ impeachment efforts, said that Volker’s claims were “a disingenuous revision of history.” Ryan Goodman, a New York University law professor who is co-editor-in-chief of Just Security, said the call transcript offered “strong evidence Kurt Volker perjured himself in defense of Trump and himself in impeachment proceedings.”

Volker declined to comment then. Asked again for comment via email this week, Volker said, “You have so many facts wrong even in this email it is not possible to respond.” He did not reply when asked to specify.

Volker’s false statements warrant attention because in 2019, they were seized on by Republicans. “Volker, the special envoy, said there was no quid pro quo,” Sen. Lindsey Graham told reporters in November 2019, adding: “I find the whole process to be a sham and I’m not going to legitimize it.” Rep. Michael R. Turner (R-Ohio) declared during the November hearing: “You know pretty much, Ambassador Volker, you just like took apart their entire case.” While Senate Republicans probably would have acquitted Trump regardless of Volker’s testimony, his inaccurate claims helped Trump’s defenders cast the proceedings as partisan and dismiss the significance of Trump’s effort to extort Zelenskyy. (Trump did release the aid to Ukraine after this effort was exposed.)

These events also matter for another reason. When Volker advocates for a no-fly zone, he is identified as a “former US envoy to Ukraine and former US ambassador to NATO,” as Brennan put it. He is presented as an expert. And he, along with the shows that feature him, asks viewers to trust him on that basis.

Volker works for BGR Government Relations, a lobbying firm. He also held that position while he was US representative to Ukraine. Until recently, BGR represented Nord Stream 2 AG, a company owned by Gazprom, the Russian state-run gas company that built a pipeline from Russia to Germany. BGR ended this relationship when the US imposed sanctions on Nord Stream after Russia’s invasion of Ukraine. None of the shows Volker recently appeared on mentioned his work for BGR. Nor did they mention his role in the Ukraine scandal beyond his job title at the time. (PBS spokesperson Nick Massella said the former ambassador appeared in “a very focused conversation for which Volker has a provocative perspective.” Massella noted that Volker was booked alongside Retired Army Lt. General Doug Lute, who argued against a no-fly zone. Fox News and CBS News did not respond to requests for comment.)

There is reason to question not only the arguments in support of a no-fly zone in Ukraine, but also the motives of advocates of the idea. Many are former senior government officials, sophisticated operatives who understand that there is little chance that the Biden administration and NATO allies will take the risk of assuming that Vladmir Putin, who has said a no-fly zone would be an act of war, is bluffing. Freed of responsibly for avoiding World War III, advocates like former Sen. Joe Lieberman can call opponents of a no-fly zone “morally wrong” and overly fearful, drubbing them with responsibility for Russia killing Ukrainian civilians. These arguments, as national security reporter Spencer Ackerman writes, seem disingenuous and are likely to make prudence more politically painful for Biden, even if they don’t sway him. But that is not the problem of hawkish advocates, who reap rewards, including appearances on cable news shows, for their tough talk.

Some people advocating for a no-fly zone zone in Ukraine, probably, have the best intentions. But the fact that a leading advocate of that position appears to have misled Congress last time he got involved in Ukraine’s national security is one more reason to treat these arguments skeptically.