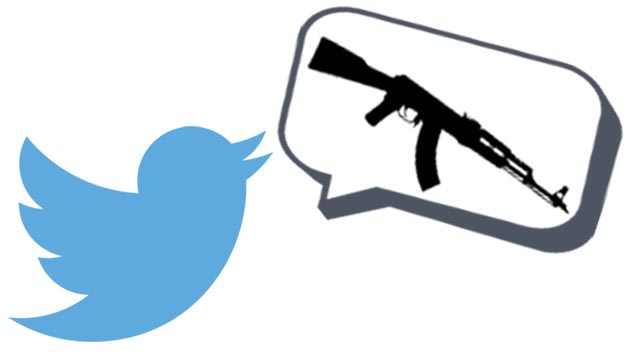 A new nonprofit headed by a former homeland security adviser to George W. Bush is pushing Twitter to remove accounts associated with ISIS, the radical Islamist group that has taken over parts of Syria and Iraq. The group, dubbed the Counter Extremism Project, hopes to eliminate ISIS’s ability to use propaganda to recruit members online. “The ultimate goal is…can I put myself out of business?” says Fran Townsend, the ex-Bush aide spearheading the effort. “Can I deny them the virtual battlefield?”

Townsend is hoping Twitter execs will agree to meet with her so she can discuss her group’s goals. In the meantime, CEP’s plan is to highlight ISIS accounts and pressure Twitter to take them down. Townsend is hoping the social media giant will grant her group “trusted reporter” status. (Twitter doesn’t appear to give greater weight to complaints from anyone in particular.) Beyond that, CEP wants Twitter to develop an automated method for identifying and removing ISIS accounts. Townsend says she is sure “there are technological ways to” identify ISIS members, “YouTube, Google…they have ways to identify pornography,” she adds, but admits she doesn’t understand the issue “in a sufficiently technical way.” Twitter, she notes, might have to overhaul its rules—including its focus on anonymity—to aid in the fight against ISIS.

There’s one problem with her plan: Experts aren’t sure whether kicking ISIS off Twitter is even desirable.

This summer, a social media employee told Mashable that US officials approached the company and asked that ISIS’s bloody, violent content remain online. “U.S. intelligence prefers for these accounts to stay up, rather than come down,” the employee said. Jason Healey, a founding member of the Pentagon’s cyberwar unit, noted: “Whether or not it makes more sense to be trying to quash this kind of communication so they can’t get their message out, intel folks would always want them to have it more open.”

Deleting ISIS Twitter accounts seems central to CEP’s mission. But when I asked if she finds any value in monitoring ISIS tweeters for intelligence reasons, Townsend acknowledged the tension between monitoring and eradicating. “When I was in the government we would have this debate,” she said. “Some of them you want to follow for a bit. Then there comes a point when they become too operational…and we’re really only focused on the ones who are calling for action. With these accounts, there is no value.”

Townsend wouldn’t explain what makes an ISIS tweet “too operational”—and who should get to decide. Instead, she noted that her group wants to “provide a megaphone to other Muslim voices,” who are pushing back against radicals. (She didn’t give any examples of specific groups.) CEP also wants to reply to radical Islamists online with logical, powerful counterarguments, she added. But such an effort is already under way.  In September, President Barack Obama called on the Muslim world to reject ISIS in his address to the United Nations, and the State Department’s three-year-old “Think Again Turn Away” Twitter account focuses on debating ISIS members on Twitter in real time.

Townsend’s biggest challenge, though, isn’t sorting out the best approach to containing ISIS on Twitter. It’s that Twitter doesn’t seem to be interested in her ideas. The tech company has so far refused to meet with her. That may be no surprise. “One man’s terrorist is another man’s freedom fighter,” a Twitter official told Mother Jones in November, claiming that Twitter is not interested in waging a virtual war with ISIS.