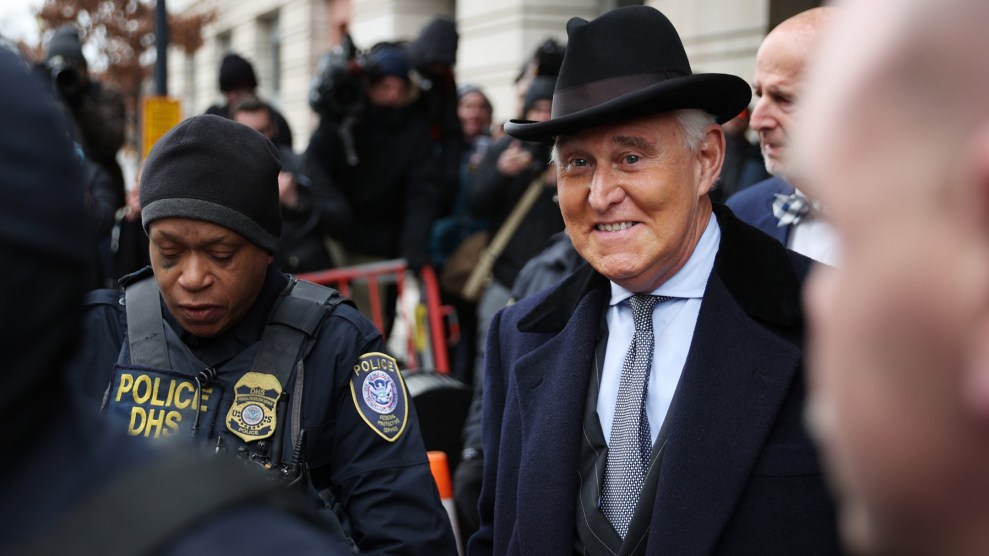 UPDATE: On the evening of December 23, 2020, Donald Trump issued Roger Stone a full pardon, as he also pardoned Paul Manafort, Trump’s former campaign manger, who had been convicted of assorted financial crimes. With these pardons, Trump was trying to undo the work of Special Counsel Robert Mueller and his Russia probe and putting the final touches on a coverup of Trump’s own (and possibly criminal) misconduct. The story below explains all that.

On Friday night—as Americans across the country continued protesting dangerous and divisive disparities in the criminal justice system—Donald Trump commuted the prison sentence of his longtime adviser Roger Stone, who was convicted of lying to Congress and witness tampering during the Trump-Russia investigation. “Roger Stone is now a free man,” the Trump White House declared.

It’s easy—and appropriate—to see this as brazen cronyism. Stone, the veteran dirty trickster, has been a Trump intimate for decades. He served him as a lobbyist and political adviser, and for years he encouraged him to run for president—until Trump said yes. Then Stone helped birth Trump’s White House bid in 2015. Though he has Richard Nixon’s visage tattooed on his back, Stone, a veteran conspiracy theorist and purveyor of the politics of paranoia, has had Trump in his heart. Yet Trump’s grant of clemency—as it’s officially called—was not merely an act of friendship or a reward for Stone’s devotion. It was part of a coverup of Trump’s own wrongdoing, which included an action that might have been a crime.

Recall what Stone lied to Congress about. While being grilled by the Democrats of the House Intelligence Committee in 2017, he prevaricated about his efforts to make contact with WikiLeaks during the 2016 campaign, when Russian intelligence was using Julian Assange’s website to disseminate material its hackers had stolen from Democrats. The Russian-WikiLeaks operation was mounted to hurt Hillary Clinton and help Donald Trump, and Trump and his campaign were delighted by the Kremlin’s intervention.

As Stone’s trial demonstrated, Trump and Paul Manafort, then the chairman of the Trump campaign, tried to use Stone as a go-between with WikiLeaks, at least to find out what Assange had on Clinton so they could best exploit it. (The portions of the Mueller report that covered this were redacted when released publicly over a year ago. Consequently, this piece of Trumpian skullduggery never received significant media attention. In June, these parts of the report were unredacted and released.) At Stone’s trial, Rick Gates, Trump’s former deputy campaign manager, testified he had witnessed a phone conversation between Trump and Stone that he concluded was about WikiLeaks and its plans to release material hacked by the Russians. Gates’ statements to the court also indicated that Trump was briefed on what Stone was telling other campaign officials about WikiLeaks.

Whether Stone interacted with WikiLeaks on behalf of the Trump campaign remains murky. At the time, Stone declared publicly that he was in contact with Assange. Later, he claimed he was just boasting—that is, lying. He told the House Intelligence Committee, which was investigating Russian interference, that he had only heard about WikiLeaks plans through an intermediary—a radio show host named Randy Credico—but it turned out that this story was false and that Stone had attempted to enlist Jerome Corsi, a rightwing journalist and fellow conspiracy theorist, to be a conduit with WikiLeaks.

This lie and others landed Stone in court, and a jury found him guilty of five counts of making false statements to Congress. He was also found guilty of witnesses tampering and obstructing a congressional inquiry. In other words, he was convicted of preventing Congress and the American public from learning the truth about the Trump campaign and the Russian attack. A side note that should not be forgotten: during the 2016 campaign, Stone repeatedly maintained that Russia had not hacked the Democrats and insisted the Russians’ phony cover story—a hacker named Guccifer  2.0 was solely to blame—was accurate. That means Stone was helping to disseminate Kremlin disinformation and aiding and abetting Moscow’s effort to sabotage the election.

After Stone’s conviction, Justice Department prosecutors requested a sentence of seven to nine years. But Attorney General Bill Barr intervened, and the department filed a new sentencing memo that called for a lesser penalty of three to four years. Stone was eventually sentenced to 40 months. He was set to report to federal prison by June 30, but that date was pushed back to mid-July.  In a statement explaining Trump’s executive order freeing Stone, the White House bitterly assailed the Russia investigation mounted by Special Counsel Robert Mueller and proclaimed that Stone was a “victim of the Russia Hoax.” But not even Barr agreed with that assessment. In a recent interview, the attorney general, in what seemed to be a slight shift in his position, called the prosecution of Stone “righteous.”

Though Stone’s lying about his WikiLeaks contacts initially seemed convoluted and even pointless, the trial made clear what Stone had been up to. Prosecutors submitted evidence that Stone had used Corsi to gather intelligence related to WikiLeaks for Trump and his campaign. By refusing to disclose this, Stone was covering up Trump’s efforts to connect with WikiLeaks while WikiLeaks was part of a Russian operation targeting American democracy. That’s certainly a secret worth keeping—an American presidential candidate seeking a back-channel to an overseas entity involved in a clandestine assault on a US election. Should this have become publicly known, some people might have viewed it as an instance of Trump trying to collude with the Russian operation.

Hours before Trump granted the commutation, Stone essentially acknowledged that he had smothered information that would have been damaging to Trump, telling journalist Howard Fineman, “[Trump] knows I was under enormous pressure to turn on him. It would have eased my situation considerably. But I didn’t.”

Stone’s lies did work to an extent. Trump’s attempt to hook up with WikiLeaks through Stone never became part of the Russia scandal narrative. But the investigation of Stone’s lies led to another somewhat-ignored aspect of the controversy: Trump apparently lied to Special Counsel Robert Mueller. And lying to the special counsel—like lying to Congress—is a crime.

During their investigation, Mueller and his investigators examined the key question of whether Trump and his campaign had communicated with WikiLeaks. But Trump refused to be interviewed in person by Mueller’s team. He would only answer written questions on a limited number of subjects. So Mueller sent him a list of queries, including whether he was ever told that Stone had been in touch with WikiLeaks and whether he or anyone associated with his campaign had spoken to Stone about WikiLeaks.

In his written response, Trump replied, “I do not recall being told during the campaign that Roger Stone or anyone associated with my campaign had discussions with any of the entities named in the question regarding the content or timing of release of hacked emails.” He also answered, “I do not recall discussing WikiLeaks with [Stone], nor do I recall being aware of Mr. Stone having discussed WikiLeaks with individuals associated with my campaign.” Trump, who has frequently boasted of possessing a prodigious memory, offered a wide denial, claiming to have “no recollection of the specifics of any conversations I had with Mr. Stone between June 1, 2016” and Election Day. Trump was saying that as far as he knew, he and his campaign had had nothing to do with Stone regarding WikiLeaks. That was false.

Mueller’s report characterized Trump’s responses as “inadequate.” And the recently released portions contain a carefully written passage that suggests Mueller and his team suspected Trump had lied to them:

Witnesses have stated…that candidate Trump discussed WikiLeaks with Stone, that Trump knew that [former Campaign Chairman Paul] Manafort and Gates had asked Stone to find out what other damaging information about Clinton WikiLeaks possessed, and that Stone’s claimed connection to WikiLeaks was common knowledge within the Campaign. It is possible that, by the time the President submitted his written answers two years after the relevant events had occurred, he no longer had clear recollections of his discussions with Stone or his knowledge of Stone’s asserted communications with WikiLeaks. But the President’s conduct could also be viewed as reflecting his awareness that Stone could provide evidence that would run counter to the President’s denials and would link the President to Stone’s efforts to reach out to WikiLeaks.

The Stone trial certainly produced evidence that Trump had indeed lied to Mueller, though the president had deployed the I-have-no-recollection dodge. He and his campaign had been in contact with Stone about WikiLeaks and its release of the Democratic documents swiped by Moscow’s cyberthieves. Clearly, Stone and Trump did not want this revealed. So Stone broke the law to keep this hidden. And Trump may have done so as well. (Mueller concluded that under Justice Department policy he did not have the power to indict Trump for any crimes, and it’s often tough for prosecutors to prove someone has lied when that person claims they cannot recall.)

Now Trump and Stone, political soulmates, are both off the hook for any criminal cover-up. Stone stonewalled to protect Trump, and Trump has protected Stone from prison. They both have perverted the criminal justice system. Through his years as president, Trump has abused his pardon and commutation power to rescue political allies and dodgy characters. He has also relentlessly waged war on the FBI’s Trump-Russia investigation, seeking revenge on anyone who was part of it and championing subjects of that probe who have been found guilty of crimes, most notably his former national security adviser, Michael Flynn. (Trump is desperately trying to wipe clean the very real Russian taint on his electoral victory.) But Trump’s commutation of Stone’s sentence is in a category of its own. With this wave of the wand, Trump not only frees a scoundrel; he rewards a co-conspirator and safeguards his own deception.